Robinhood investors are making a fortune with these stocks now. Should they -- and you -- hold on for the long term?

Robinhood investors are piling into two high-growth companies that have delivered both revenue and share performance this year: Beyond Meat (BYND 2.62%) and Amazon (AMZN -1.90%). Inexperienced investors often use this popular online trading platform, and they seek out shares that may deliver a quick gain. Beyond Meat climbed 107% so far this year, while Amazon rose 62%. It's likely many Robinhood traders scored a win with these investments in the short term.

But sometimes Robinhood favorites can also deliver long-term performance. In this case, should we hop on the investment train and buy shares of Amazon and Beyond Meat? Let's take a closer look at each company before deciding. 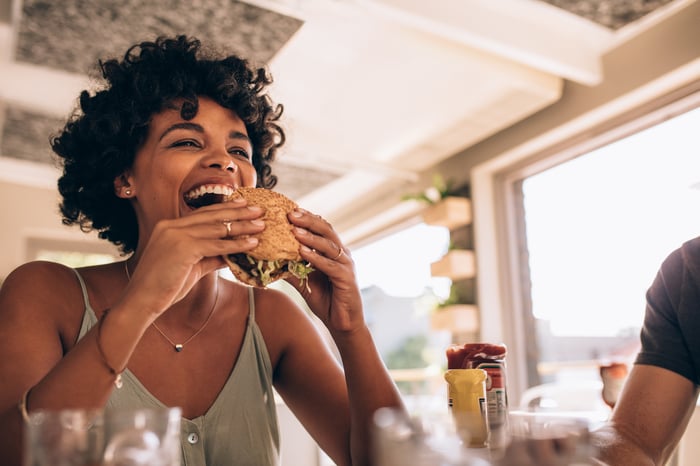 Beyond Meat's shares soared 252% in a little more than two months following its IPOin May 2019. The stock had since pared gains but is still up 134% since going public. The reason for the increase can be easily explained. The maker of plant-based meat alternatives reported triple-digit revenue growth for every quarter on a year over year, or YOY, basis except for the most recent one. For the second quarter of 2020, ending June 30, revenue climbed "only" 69% as the coronavirus pandemic meant lower sales to foodservice clients.

The company's growth isn't surprising, considering its innovation, new product launches, and its expansion across markets. Ready-to-cook Beyond Meatballs are the latest item on the menu, launching in supermarkets nationwide this month. Beyond Meat also has recently announced an agreement to manufacture its products in China for the Chinese market, and this summer said it has invested in production in Quebec for the Canadian market. Last month, the company opened its e-commerce site for U.S. consumers. Beyond Meat's products are also available at 26,000 stores in the U.S.

To keep customers coming back for seconds, Beyond Meat strives to make its alternative proteins as close as possible in texture, appearance, aroma, and flavor to actual meat products. That means increasing research and development costs. For example, R&D spending in the second quarter rose 43%.

At the same time, Beyond Meat realizes it must make its products affordable. The goal is price parity with animal protein in at least one product category by 2024.

Aiming to differentiate its products through innovation and to work on pricing is wise in what is becoming a crowded playing field. Competitors include private companies like Impossible Foods, as well as food industry giants like Tyson (TSN -2.26%). Startups such as Memphis Meats, growing meat from animal cells, represent competition of the future.

And this is where my concern lies. In spite of Beyond Meat's efforts to differentiate itself, it's going to be sharing the playing field with many others in the long term. If pricing is lower, the idea is to gain on volume. But can it truly do that considering the level of competition? I'm not convinced. And that's why holding onto Beyond Meat shares for the long term represents a risk.

Amazon reported yet another solid quarter of earnings recently. At a time when most retailers struggled, the company saw net income double to $5.2 billion in the second quarter. And sales climbed 40% to nearly $89 billion. Demand was so high during the coronavirus outbreak that Amazon even created 175,000 new jobs to keep up with it.

Prior to the current pandemic situation, which is temporary, Amazon had proven its earnings power. The company's annual net income has been climbing for five years , and annual revenue has been increasing for more than a decade.

Now we might say: But what happens if online demand slows as shoppers return to stores once the coronavirus crisis is over? It's logical to predict a slowdown, but I wouldn't expect it to be extreme. Before the crisis, online shopping already was on the rise. Digital spending accounted for 16% of retail sales last year, up from about 14% in 2018, according to a Digital Commerce 360 analysis. And sales on Amazon made up more than a third of all U.S. online purchases, the report showed.

But what I really like about Amazon is the fact that it doesn't only rely on shopping. A major growth driver for the business is actually Amazon Web Services (AWS). The segment's operating income makes up 57% of Amazon's total operating income. And AWS takes the top spot in the global cloud infrastructure services market with a 33% share, according to Synergy Research data. Competitors are far behind, with an 18% share for Microsoft (MSFT -0.27%) and a 9% share for Alphabet's (GOOG -8.01%) Google.

Trading at 115times trailing 12-month earnings, Amazon shares aren't cheap. Still, Wall Street predicts Amazon stock can climb 22% from today's level within 12 months. I agree. The company continues to show its ability to grow, diversify, and deliver sales and earnings increases. So, while some Robinhood investors may buy Amazon for a short-term gain, I say hold onto the shares -- for as long as possible.