Ten years may seem like a long time, but it's critical for investors to think about what companies could look like a decade, or longer, from now. After all, the value of any business is the present value of all future cash flows.

Chewy (NYSE:CHWY), the leading pure-play online retailer for pet food and supplies in the U.S., is likely to be much bigger and more profitable a decade from now. Here's why.

A large and growing market

Chewy is operating in a huge pet market that's expected to continue to grow at an attractive rate. According to the American Pet Products Association (APPA), total spending on pets in the U.S. was $95.7 billion last year and the group estimates it will grow at a 5.1% annual rate through 2024. That suggests the market will grow to $122.7 billion by 2024. 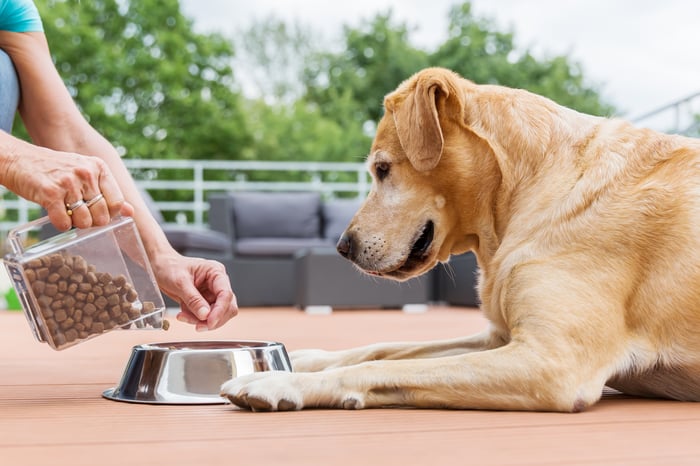 The APPA segments of that market Chewy primarily competes in, which include pet food, supplies, and medicine represented $56.1 billion of the total last year.That would grow to $71.9 billion in 2024 if it grows in line with the total market growth estimate.

But Chewy's addressable market is probably even bigger than that because it has expanded into the pet pharmacy business, will likely begin offering a marketplace of services in the future, and could expand internationally.

Over time, more and more of the pet market has moved online. According to Packaged Facts, the e-commerce portion has grown from 7% of the market in 2014 to 22% of the market last year. And Chewy's management team cited an estimate that it will grow to over 35% of the market by 2024.

That would mean over $25 billion of Chewy's $71.9 billion core addressable market would be represented by e-commerce in 2024. That's a big growth opportunity considering Chewy's revenue was only $4.8 billion last year and it's the largest pure-play online retailer in the category. If Chewy were to maintain roughly 40% of the online market, it would have about $10 billion in revenue, more than double last year's level.

Over the longer term, online penetration of the pet category should continue to increase. After all, Chewy offers numerous advantages for the consumer over physical retailers. For example, Chewy offers a far wider selection, which is possible with the entirely online model; lower prices due to scale advantages; and fast shipping straight to customers' doors, which is much more convenient than going into stores and carrying out heavy bags of dog food. In addition, it has taken customer obsession to a whole new level.

As a result, the rational outcome should be for e-commerce to continue capturing more of the market over time. As that happens, it should continue to put increasing pressure on physical retailers of pet products, which should cause more of them to close their doors. That, in turn, would allow Chewy to capture even more of the market. It's not unreasonable to think e-commerce could be over 50% of the pet market in 10 years.

Of course, Chewy won't be the only online retailer of pet food and supplies in the long run; a little company called Amazon is also active in the category. But Chewy is certainly in an attractive position as more of the category moves online.

If Chewy's part of the pet market grows 5.1% per year and online penetration reaches 50% in 10 years, the online piece of the market would be approaching $50 billion. If Chewy were to win half of the online market, it would have close to $25 billion in revenue. That would be almost five-fold revenue growth compared to last year.

Chewy isn't profitable today because it is reinvesting so much of its growing gross profit dollars into advertising and growth, including expanding fulfillment center capacity. That trade-off is well worth it because Chewy will be much bigger and more profitable in the future because of it.

For one thing, the company's gross margin of around 24% last year has upside. One source of that upside is the growth of the company's private brands, which are outgrowing the rest of the business. Private brands accounted for 5.3% of sales at the end of 2018, the latest data available, but management said it plans to grow it to be between 15% and 30% of sales. Since private brands have higher gross profit margins than sales of third-party products, outsized private brands growth would help send gross margins higher.

In addition, hard goods (dog beds, crates, toys), the pet pharmacy business, and the potential services marketplace also have higher margins than the rest of the business. So as those revenue streams grow larger, it should only help boost profits. Throw in greater scale efficiencies in marketing and other operating expenses and Chewy could reasonably have double-digit operating margins in a decade.

Investors looking out a decade at the Chewy of 2030 should like what they see.