A surge in stock price reflects investors' enthusiasm over the company's adaptability, as well as its business transformation efforts.

Shares of iconic furniture designer and manufacturer Herman Miller (MLKN) raced forward on Thursday of this past week, soaring more than 33% following the release of a resilient first-quarter fiscal 2021 quarterly report. Investors had anticipated an extremely weak top-line performance, as the company's biggest revenue stream, its North American segment, depends on project-based corporate orders. Needless to say, completing office furnishings projects hasn't figured as a high priority for many businesses in a year characterized by remote working.

While the North American segment did indeed stall, with organic sales slumping nearly 27% from the prior-year quarter, Herman Miller offset much of this pressure through its international and retail segments. Thus a total revenue dip of less than 7%, to $627 million, coupled with news that the company was reinstating its dividend, pulled investors aggressively back into the furniture maker's fold. 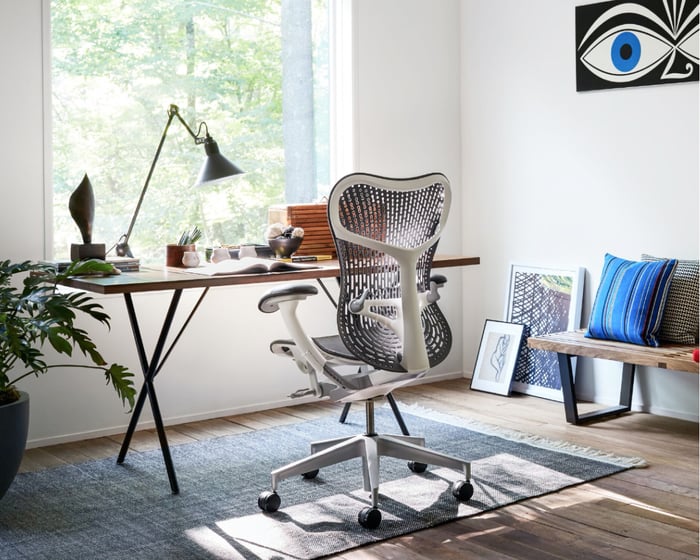 The company is marketing chairs like the Mirra 2 as ergonomic work-from-home options. Image source: Herman Miller.

Why this quarter was significant

Herman Miller's international business underpinned investor relief this quarter. At $154 million, segment sales made up 25% of the total company top line and reflected normalizing economic conditions outside the United States. During the quarterly earnings conference call, CEO Andi Owen cited China and Denmark, both important markets for Herman Miller, as examples of countries where business and life are returning to normal. Segment sales rose 35% year over year, though this was mostly on the strength of prior-year acquisitions. Nonetheless, investors appreciated a 1% organic sales growth rate, given the North American organic sales decline.

If international sales reassured shareholders, the company's retail segment sparked excitement, as its sales unexpectedly leaped 36% year over year, to $134 million. The segment leaned into opportunities created by the COVID-19 pandemic by optimizing its Herman Miller-branded website with a "Work From Home" landing page, and by revamping its Design Within Reach (DWR) website to engage retail customers that would normally patronize DWR studio stores. E-commerce simply exploded, with Web-based sales increasing by 248% year over year.

The uptake in the retail channel contributed to the sense that this was a transformational quarter for Herman Miller. Many of the initiatives Owen has undertaken since her appointment as CEO in 2018, including a growing emphasis on direct-to-customer sales, and a gradual upgrading of the manufacturer's e-commerce presence, helped it weather a quarter that might have severely squeezed its business model in the past.

Even beyond the context of the pandemic, however, it's clear that management is pushing to reap the value of its venerable brand in new contexts and to engage a younger generation of consumers. For example, Herman Miller recently launched a new gaming chair in partnership with Logitech G, a subsidiary of device maker Logitech that's devoted to online gaming. Dubbed the Herman Miller x Logitech G Embody Gaming Chair, the model retails for roughly $1,500, and the company is racing to keep up with demand. Current orders face a four-week fulfillment delay.

Herman Miller delivered a sharp uptick in net income over the last three months despite the year-over-year sales decline. Net earnings improved to $73 million against $48 million in Q1 2020. This was partly due to a higher gross margin, which jumped by 320 basis points over Q1 2020 to nearly 40%. Management explained that this improvement "reflected strong channel and product mix and high productivity from [our] manufacturing teams." Herman Miller complimented this with a $31 million reduction in operating expenses, which it attributed to "decisive actions to manage expense levels." The gross profitability increase and expense trimming pushed operating margin up by more than 600 basis points versus the comparable quarter, to roughly 15%.

Leaner and more efficient operations are leading to healthier cash generation -- operating cash flows more than doubled from $55 million in the prior-year quarter to $116 million this quarter. As noted above, the consumer discretionary stalwart reinstated its dividend this week, after suspending it earlier this year out of an abundance of caution due to the pandemic. The company missed its April and June dividend declarations, and the current dividend declaration, payable in January, still speaks to caution. Herman Miller resumed its payout at $0.1875 each quarter, against its former payout level of $0.21. Given a robust balance sheet and improving conditions, I would guess that the payout will be raised to former levels within the next four quarters.

Looking forward to the rest of this fiscal year, the organization refrained from resuming quarterly earnings guidance in its first-quarter report. Management did share that orders in the first two weeks of the new quarter (Q2 2021) are down 10% year over year, an improvement from a slump of 18% in the first quarter. This sharpens the narrative that the company survived a big stress test this period, and more than compensated for weakness in its core segment. Longer-term shareholders certainly also believe that business transformation efforts will eventually have a much higher payoff -- once the impact of COVID-19 finally begins to subside.