Activision Blizzard (NASDAQ:ATVI) continues to benefit greatly from increased video game growth and popular content offerings. The gaming giant has been gaining as people spend more time at home, thanks to lockdown measures contributing to live events being cancelled, and larger gatherings put on hold. The company's strong quarterly results support this thesis. 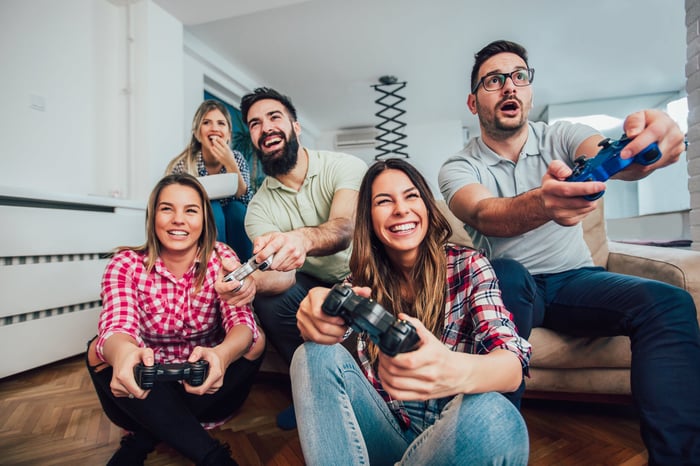 On Aug. 2, the Santa Monica, California-based company reported a second-quarter (ended June 30) revenue increase of 38% year over year, boosted by increased customer engagement and audience gains. In addition, the player base grew by 100 million monthly active players, or 30%, year over year.

That said, even as people begin to spend less time sheltered at homes as lockdown measures ease, the consumer discretionary company's revenue expansion should be supported by new content launches for key franchises. CFO Dennis Durkin spoke about new content driving growth: "The addition of the Warzone free-to-play experience has significantly increased the reach, engagement, and player investment in Call of Duty, building on existing strength for our largest franchise and creating a strong foundation for future financial performance".

On Aug. 4, Activision also raised its full-year outlook for revenue to $7.28 billion, up from its previous full year guidance of $6.8 billion given on May 5. And this new number prudently takes into account the various COVID-19 pandemic risks to the business, with potential outperformance if these risks don't materialize.

At a more macro level, consumer spending on video gaming in the U.S. hit a record $11.6 billion in the second quarter, up 30% versus Q2 2019, and a 7% increase over the first quarter, according to research from The NPD Group. The spending growth came from both physical content and hardware, as well as digital and mobile spending.

For the month of August alone, U.S. consumers spend $3.33 billion, a 37% increase from August 2019, The NPD Group reports. This number includes consoles, accessories, and digital and packaged media. The strong August increase follows increases of 26% in June and 32% in July.

As many entertainment options, including films and professional sports, have been limited or put on hold because of COVID-19, people are turning to gaming as a way to engage with friends and family socially.

During the pandemic, many have turned to video games not only to keep them preoccupied, but also to stay in touch with family and friends. This has resulted in an acceleration of what were already established trends toward heightened video game player engagement. I don't see any signs of this slowing down.

CEO Bobby Kotick commented on the strength of Call of Duty on the second-quarter earnings call, "The biggest driver of our year-over-year engagement and financial performance was Call of Duty, which has seen a remarkable increase in its scale as we expanded the franchise across platforms, geographies, and business models."

Overall, Activision is well positioned to benefit from secular trends of more time spent on gaming, as well as its hugely popular franchises that resonate with customers. Investors should consider investing in this consumer discretionary company with strong revenue growth momentum.