Could this be the electric-car maker's next big catalyst?

With Tesla (TSLA 0.02%) shares soaring more than 800% over the past 12 months, the automaker needs to have a few new catalysts up its sleeve to continue supporting its pricey valuation. One potential driver for the company that may be on the horizon is a new subscription service, which CEO Elon Musk has said will probably launch toward the end of this year.

Rumors and speculation about the new subscription service, which will be for the company's driver-assist Autopilot technology (and eventually for Tesla's Full Self-Driving Capability), gained steam over the weekend. The electric-car news website Electrek discovered that a Reddit user had reverse-engineered a recent upgrade to Tesla's mobile app, revealing a "subscribe" section. This suggests Tesla is still planning to launch a new subscription service soon. 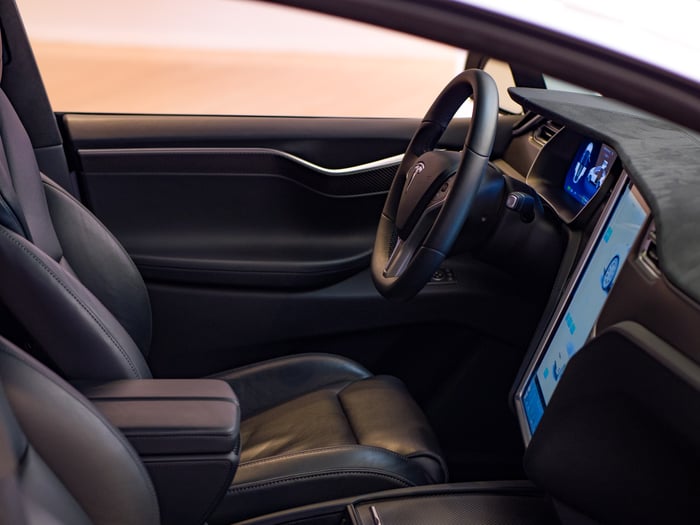 The first confirmation from Tesla that the company was working on a subscription service came during the automaker's first-quarter earnings call earlier this year.

A subscription service would make sense for many customers, particularly those who are leasing their Tesla vehicles, or who aren't sure how long they will keep their current Tesla.

Tesla's Full Self-Driving Capability package, which currently sets vehicle buyers back $8,000, notably includes the company's driver-assist Autopilot technology, as well as more advanced features like summoning a driverless Tesla vehicle in a parking lot and Autopilot-assisted stopping and going at stop signs and traffic lights. Fully autonomous driving, however, hasn't been launched yet.

What about Tesla's promised self-driving tech?

While a subscription service for Autopilot could certainly make the technology more accessible to a wider base of customers, the missing element in the automaker's growth plans is fully autonomous driving. While Tesla says the computers built into the cars it is delivering now are capable of complete self-driving, the electric-car company still has work to do to safely deploy a software update for autonomous driving to its vehicle fleet.

"The currently enabled features require active driver supervision and do not make the vehicle autonomous," the company explains on its website. The disclosure continues:

The activation and use of these features are dependent on achieving reliability far in excess of human drivers as demonstrated by billions of miles of experience, as well as regulatory approval, which may take longer in some jurisdictions. As these self-driving features evolve, your car will be continuously upgraded through over-the-air software updates.

Subscription service or not, Tesla will likely need to demonstrate more progress toward bringing to market an Autopilot package that is truly full self-driving in order to get investors excited about the potential of a software-as-a-service offering from the automaker. The next step in this direction will likely be the deployment of automatic steering on city streets, which is slated to launch later this year, according to Tesla's website.