Tuesday finally gave investors the rally that they'd been looking for. After a gloomy September that's featured several significant pullbacks, market participants finally seemed to feel a bit more confident about the prospects for stocks surviving the often-challenging early fall season. Gains came across the board for major benchmarks, although as we've seen a lot lately, the Dow Jones Industrial Average (DJINDICES:^DJI) lagged behind the S&P 500 (SNPINDEX:^GSPC) and the Nasdaq Composite (NASDAQINDEX:^IXIC).

Among noteworthy stocks, Amazon.com (NASDAQ:AMZN) made headlines with yet another bold move to try to muscle its way into a niche that a smaller company has already pioneered. Meanwhile, Aurora Cannabis (NYSE:ACB) had marijuana investors excited going into its quarterly earnings report after the bell, with many hoping that the long-suffering cannabis sector might finally bounce back.

Shares of Amazon rose almost 6%. Some of that gain was probably due more to the overall market rebound than company-specific news. However, what got the most attention was an announcement regarding connected fitness equipment, as it seemed to signal a direct assault on bike and treadmill pioneer Peloton Interactive (NASDAQ:PTON).

Peloton rival Echelon launched a connected stationary bike that will be sold exclusively on Amazon. What Echelon currently calls the EX-Prime Smart Connect Bike, or the Prime Bike for short, seeks to offer a similar connected experience to Peloton's products at a lower cost. The Prime Bike will retail for $499, a fraction of what Peloton bikes cost.

Echelon said that it developed the bike "in collaboration with Amazon," signaling a more active role from the tech titan than just giving Echelon a place to sell its equipment. Echelon intends to offer a lineup of interactive fitness classes that's similar to what Peloton subscribers get. What's missing is Peloton's connected screen, but Echelon says that people can connect their own mobile devices to the bike.

Yet Amazon had a very different story to tell. An Amazon spokesperson said, "This bike is not an Amazon product or related to Amazon Prime. Echelon does not have a formal partnership with Amazon. We are working with Echelon to clarify this in its communications, stop the sale of the product, and change the product branding."

Shares of Peloton largely held their own, moving lower by just a fraction of a percent. What's remains to be seen is whether Peloton will retain the cachet of a high-end premium brand while Echelon ends up duking it out with other low-priced equipment makers. 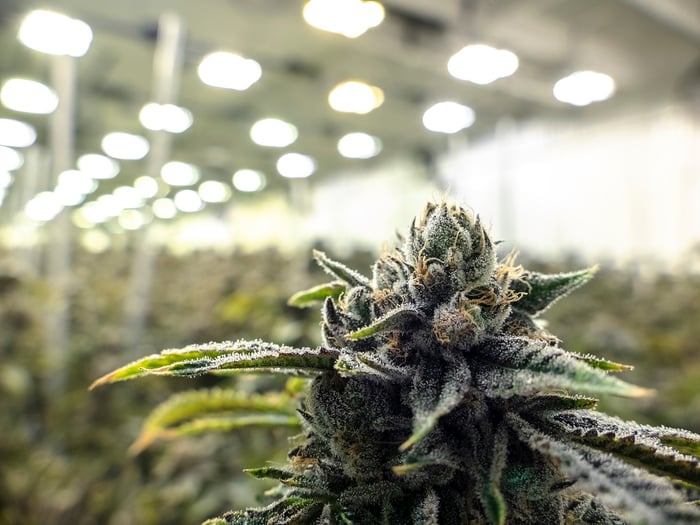 Meanwhile, Aurora Cannabis shares gained 16% in the regular session, but they were extremely volatile in after-hours trading. The marijuana company released its fiscal fourth-quarter results, and in contrast to what some analysts on Wall Street had hoped, the numbers weren't entirely satisfying.

Coming into the report, investors had hoped that the views of analysts at Jefferies would prove to be prescient. Jefferies had praised Aurora for making progress in cutting operating costs. Even though analysts remained concerned about the company having enough cash to cover needed investments, the stock price had already fallen enough to warrant that risk.

Yet Aurora's results were still lackluster. Revenue for the quarter was down 5% from fiscal Q3, with a larger drop in consumer sales. Even though sales volumes of dried cannabis jumped 36%, declines in pricing power offset the higher volume. Increased production contributed to pressure on prices as well. Significant impairment charges also weighed on results, including a $1.6 billion writedown on goodwill and intangible assets.

In response, the stock was down 9% in after-hours trading about 45 minutes after the release. That still left the share price higher than where it started the day, but Aurora has work to do before it will convince investors that the marijuana stock is in a sustainable recovery mode.

Editor's note: This story has been updated to include Amazon's response, which was received after initial publication.