The toy and game company's stock is down in 2020, but it has big plans for the future.

One of the industries that has been hard-hit by the pandemic is toys. That's somewhat counter-intuitive, since kids need toys when they're home all day. But digital entertainment and gaming were the winners during lockdowns, and traditional toys fell by the wayside when people, many of whom lost their jobs over the past few months, used their funds for essentials.

Play and entertainment company Hasbro (HAS 0.08%) posted a major sales decline in the second quarter ended June 28 as its toys were outsold by digital gaming products. But it's changing its product line to reflect today's trends and to become more relevant. Does that make it a buy?

Hasbro makes many of the toys and games you know and love, such as Monopoly, G.I. Joe, and My Little Pony. It has three broad product segments: gaming, entertainment, and consumer products. The company began with toys and added games, but Hasbro has been developing digital gaming and entertainment as trends shift in that direction. Even before the pandemic, sales were slowing down, and Hasbro's been making strong efforts to join the digital age and pump up its top line. 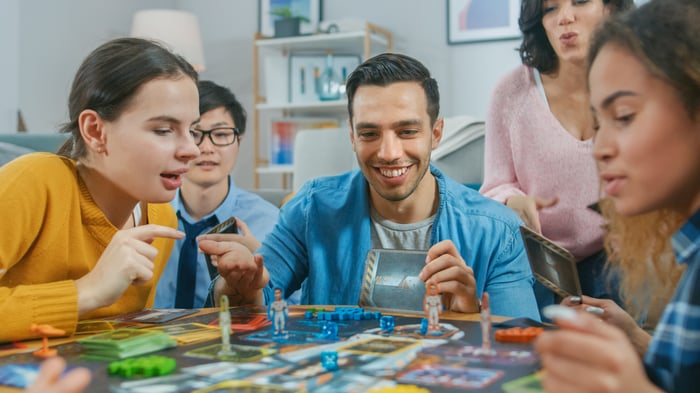 One of the company's most valuable assets is its name brands, which it is now leveraging for initiatives like the Transformers movie franchise, one of the highest-grossing film series of all time.

The company launched Hasbro Studios in 2009 and acquired Boulder Media, an animation studio, in 2016. Hasbro also acquired British production studio Entertainment One in 2019. eOne produces media for preschool-age children, including the popular Peppa Pig series, and it's working on 100 new film productions and 60 television programs, a huge amount of content to engage customers and boost product demand. Hasbro is also producing a series for Netflix called Alien TV, as well as a feature-length My Little Pony film due out in 2021.

On the flip side, Hasbro has a lucrative contract with Walt Disney to produce products based on several of its franchises, including Star Wars, The Mandalorian, and Disney Princesses. These were some of the only brands that were strong during the fiscal second quarter with increased sales for Star Wars, Frozen 2, and Universal's (which Hasbro also has a contract with) Trolls products during that period.

Getting back to speed after the pandemic

The consumer discretionary company's revenue sagged 29% during its second quarter, and the company posted a $33 million loss. Production for its many projects was put on hold, but not everything was terrible.

The biggest winners during the quarter were classic games, led by Jenga, Battleship, Connect 4, and Mousetrap. This category grew 11% year over year, which showcases the strength of key franchises despite closed stores, interrupted distribution channels, and other pandemic woes.

Although the company is switching to a digital-first model, e-commerce only accounted for 30% of revenue during the quarter. Hasbro is still highly reliant on stores that distribute its toys, and e-commerce and digital entertainment are still the minority.

Does the past indicate what's in store for the future?

Hasbro owns many of the most popualar brands in toys and games today and has forged important deals to make the most out of them. Much of its sales decline was due to pandemic-related logistics, but investors are clearly disappointed anyway.

Hasbro stock is down 28% year to date as of this writing, while the broad market has broken into positive territory. Total returns have been positive over the past five years, but shares underperformed the market over that period as well.

Last month, I said that when Hasbro comes through with its goals of becoming more content-focused and digitally oriented, it will prove to be a solid investment. But I don't think it's there yet, and today, I would put my money in companies that have a clearer path to growth.