These are safe investments that investors can rely on for recurring dividend income.

If the stock market crashes, it can take months, even years, for a full recovery to take place. For retirees, that's not a comfortable timeline, especially if you're on a fixed income and may not be looking to lock in your money for a long period. To minimize investment risk, you'll want to stick to relatively safe stocks that won't take your portfolio on wild swings.

Medical device maker Medtronic is a diverse company that sells essential products for the healthcare industry, and it offers the type of stability you'd want from a buy-and-forget stock. Medtronic's products treat over 70 different health conditions. From surgical tools to insulin pumps, Medtronic's broad range of products serve many different purposes. And with operations in 150 countries, the company has managed to get its products in front of patients and care providers around the globe. 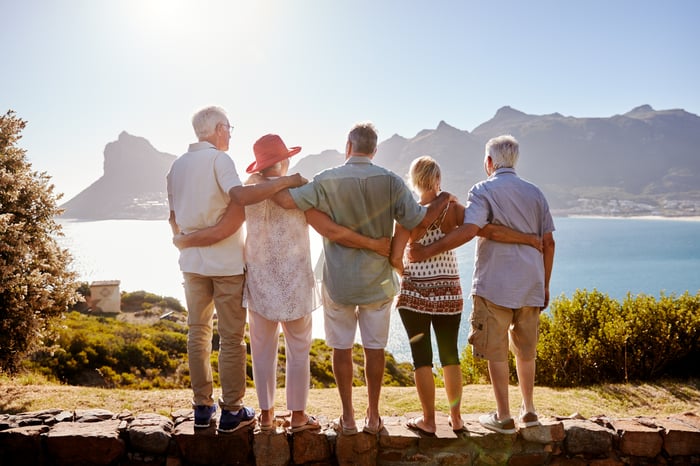 Despite its diversification and global reach, the company's business model isn't infallible. Medtronic is coming off a tough first quarter. Sales of $6.5 billion declined 13% year over year. The company's earnings report, released on Aug. 25 for the period ended July 31, was weighed down by the coronavirus pandemic as hospitals deferred elective procedures. The end result was decreased demand for Medtronic's devices. But these are not issues that should persist over the long term. As the economy slowly returns to normal and doctors begin to perform more procedures, Medtronic's sales should recover.

Historically, Medtronic has been a stable investment, earning a 10% profit margin in each of the past 10 years. While this year poses some unique challenges, there's little reason to doubt that Medtronic can overcome them; despite the soft revenue number for Q1, the Irish company still reported $487 million in net income.

One of the best reasons to hold shares of Medtronic is its dividend. Currently, the stock pays investors $0.58 every quarter, which yields 2.3% annually -- slightly better than the S&P 500 average of about 2%. Medtronic is also a Dividend Aristocrat, raising its payouts for 43 years in a row. While that may not mean a whole lot to retirees who aren't investing for the long term, it demonstrates the company's resilience and stability, no matter how tough the time may be.

Even more impressive, Coca-Cola has raised its payouts for more than 50 years in a row, earning itself the title of Dividend King. It's hard to find that kind of stability in the market, which makes Coca-Cola an ideal buy for retirees. With a quarterly dividend of $0.41, you can earn a yield of 3.4% that pays you better than Medtronic.

The popular soft drink maker is coming off a disappointing second-quarter earnings report, which it released on July 21. Its sales for the period ended June 26 totaled $7.2 billion and were down 28% year over year. The poor performance was largely a result of COVID-19 lockdowns that weighed on its away-from-home distribution channels, which include restaurants and bars. That segment of the business makes up roughly half of Coca-Cola's revenue. But now that many areas of the world are no longer under lockdowns, things should slowly improve for Coca-Cola. And even with the recent steep drop in sales, the company still reported a profit of $1.8 billion. The silver lining is that as bad as things were in Q2, they weren't bad enough to stop the company from recording a profit.

While it's a bit dependent on its flagship Coke products and doesn't support exactly as diverse a product lineup as Medtronic, the company's business still remains strong: Only once in the last 10 years has Coca-Cola reported net income below $5 billion. The Georgia-based company has been profitable every one of those years, and its profit margin typically comes in at 15% or higher.

The Pennsylvania-based telecom giant Comcast provides cable and internet services for millions of Americans. It also owns NBCUniversal, which launched the free streaming service Peacock earlier this year. Comcast has reached into other parts of the world as well. It owns Britain-based Sky TV, which it acquired in 2018.

On July 30, Comcast released its second-quarter results for the period ended June 30, and its top line also felt the impact of the coronavirus. Its sales of $23.7 billion were down 11.7% from the year-ago period. Theme park revenue from its Universal Parks and Resorts network rang in at $87 million, down more than 94% from the prior-year period, and was a key reason for the steep decline in sales. But like the other stocks on this list, Comcast proved resilient overall, continuing to post a profit of $3 billion that was down just 4.4% year over year. In each of the last 10 years, the company has posted a profit, with its net margin coming in no lower than 7% during that time.

Comcast isn't an Aristocrat, but in January, the company did announce it would be increasing its dividend payments for a 12th straight year. Investors will now be earning $0.92 annually, which equates to a yield of 2% today.

Which stock is the best for retirees?

All three stocks listed above have performed well despite the coronavirus pandemic, in what's been a big test for many companies. And that resiliency is what many retirees should undoubtedly be looking for. But before deciding which stock is the best of the bunch, let's take a look at how they've done against the S&P 500 this year: 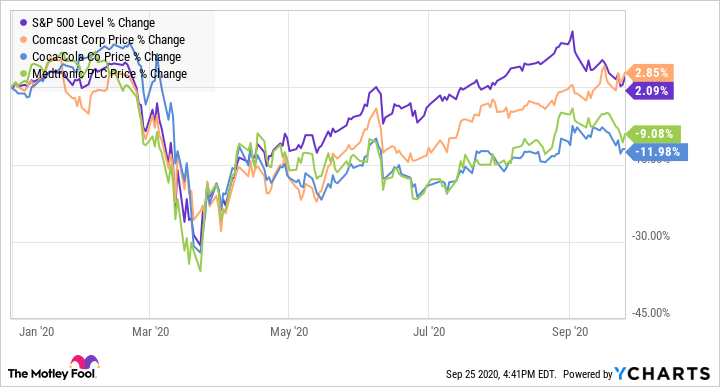 Only Comcast has outperformed the index this year. But to get a good picture of stability, let's also look at their five-year trends: 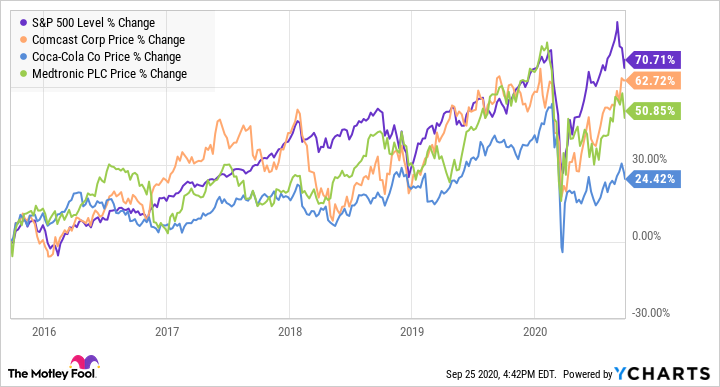 Over the longer term, Comcast is still better than the other two stocks on this list, but the delta isn't as large, especially with respect to Medtronic.

While Comcast is doing well right now, an intense battle for streaming and 5G internet supremacy could make for a leaner bottom line and slimmer profit margins in the future as it fights off competitors. And with less of a track record for dividend hikes than the other two stocks on this list, it'll be easier for Comcast to justify halting or cutting its payouts if it needs more money to inject into the business for growth purposes.

Between Coca-Cola and Medtronic, I give the edge to the healthcare stock, which enjoys much more diversification in its products, which should make it a better buy over both the short and long term. But if you're a retiree looking to insulate your portfolio from large fluctuations, you should consider buying all three stocks to benefit from much greater diversification.

2 Stocks to Buy With Dividends Yielding More Than 3%
413%