The consulting provider closes out its fiscal year with scant momentum.

Shares of global consulting and outsourcing titan Accenture (ACN -0.64%) endured a sell-off of roughly 7% in the two trading sessions following the release of the company's fiscal fourth quarter 2020 earnings report on Thursday. Revenue dipped 2% year over year to $10.8 billion, or 1% in local currency, in line with management's previous projection of a negative 3% to positive 1% revenue change in local currency terms.

However, diluted earnings per share of $1.70 fell three cents shy of consensus analyst estimates, and more significantly, management offered uninspiring guidance for the quarter ahead, prompting a round of selling in the company's stock. 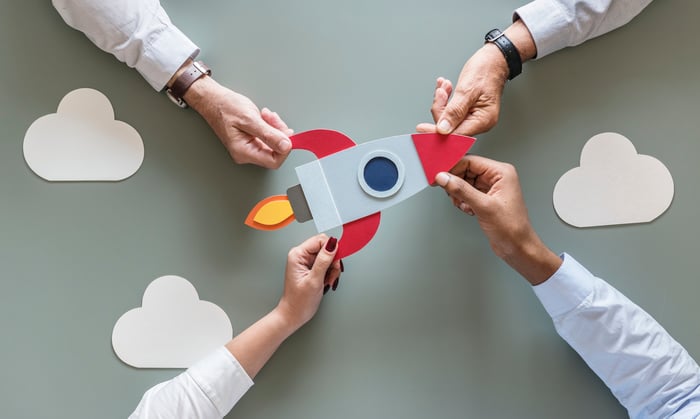 Confined to a holding pattern

Management tied Accenture's top-line dip to two percentage points of decline in reimbursable travel costs -- a clear consequence of curbed consulting travel during the pandemic. Among Accenture's geographical segments, revenue in its biggest market, North America, edged down by 1% to $5.2 billion. Performance in growth markets also declined by 1% to $2.2 billion, while the European division saw its top line falter by 5% to $3.4 billion.

Results by industry group paint a clearer picture of the company's current challenges. Of its five industry categories, only Health and Public Service managed growth over the prior-year quarter, as might be expected during a pandemic. This business generated a top-line improvement of 11%, to $2.1 billion. The remaining industry groups, which cover a broad range of economic sectors, each saw revenue retrace slightly over the comparable period.

In Accenture's earnings press release, CEO Julie Sweet pointed to the organization's flexibility during the pandemic, and its relationships with "the world's leading companies and ecosystem partners," as strengths that helped it score a record $50 billion in bookings in fiscal 2020. During the fiscal fourth quarter, Accenture reached its second highest quarterly bookings total ever, at $14 billion.

However, bookings is a forward-looking metric that measures the value of committed, contracted sales. In terms of actual revenue recognized in fiscal 2020, this number advanced by 4% in local currency terms to $44.3 billion, just below the range of 5% to 7% growth management had envisioned at the beginning of the fiscal year.

Similarly, looking ahead, Accenture is expecting its top line growth to fall in a range of negative 3% to flat in fiscal first quarter 2021 against the comparable 2020 quarter. For the full year, the organization projects local currency growth of just 2% to 5%.

Undoubtedly, COVID-19 disruption has placed a constraint on Accenture's ability to invigorate its top line, as the company's outsourcing and consulting revenue streams are dependent on demand from a wide array of global businesses. In this week's earnings conference call, while commending gains in technology and life sciences sales, CFO K.C. McClure acknowledged the following: "...as we expected, we saw continued pressure from clients in the highly impacted industries, which include travel, retail, energy, high tech, including aerospace and defense and industrial. While performance varied, this group collectively represents over 20% of our revenues and declined [in the] mid-teens."

Despite investors' disappointment this week, Accenture maintains several attractive characteristics. Its business model continued to print cash during the fourth quarter -- Accenture generated an impressive $3 billion of free cash flow in the last three months. The company also boasts a fortress balance sheet. At quarter end, it reported $5.1 billion of working capital on its books, against just $54 million in long-term debt.

Accenture signaled that it will continue shareholder-friendly actions given its enormous cash flow generation. Last year, the company returned $5 billion to shareholders in the form of $2 billion in dividends and roughly $3 billion in share repurchases. Accenture announced a quarterly dividend hike this week of 10%, to $0.88 per share, which will result in a dividend yield of 1.6% based on current share price. Management projects that free cash flow will fall between $5.7 billion and $6.2 billion in the coming year -- more than enough to cover the dividend increase and supply a similar magnitude of share repurchases as in 2020.

During the earnings call, executives revealed that they expect the consulting stalwart to return to normal growth rates in the back half of 2021 -- unless the global economy endures "another macroeconomic shock."

Thus, as we move closer to a COVID-19 vaccine at some point in 2021, Accenture believes it can rekindle year-over-year top-line improvement in the high single digits to low double digits. Any earlier signs of acceleration should help catalyze shares, which have gained just 2% year to date.