Shares of Dillard's (NYSE:DDS) plunged earlier this year along with other department store stocks as the COVID-19 pandemic disrupted apparel demand, eviscerated store traffic, and eventually forced most non-essential retailers to close their stores temporarily.

Dillard's first-quarter performance was predictably awful. The company swung to a $162 million loss after posting a $79 million profit a year earlier. However, the department store chain bounced back in a big way last quarter, improving its earnings compared to the second quarter of fiscal 2019. Despite that impressive result, Dillard's stock still sits near the $30 mark: down almost 60% year to date. 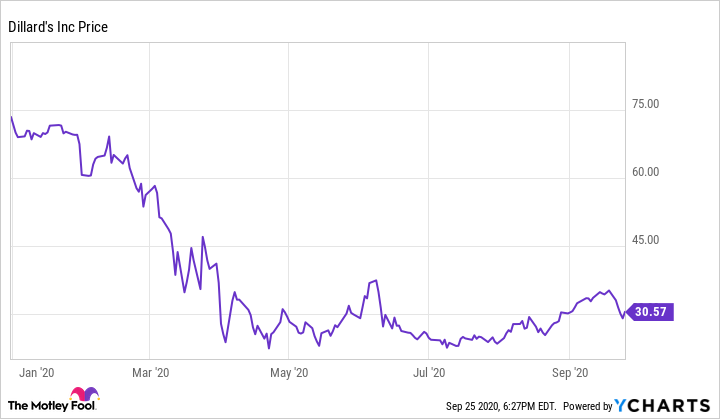 Investors' skepticism about the company's prospects might set the stage for a future rally, though. The ultra-low share price may enable Dillard's to buy back a lot of stock. That in turn could help trigger a short squeeze, sending Dillard's stock flying higher.

Inventory management gets Dillard's back on track

While Dillard's posted an ugly loss in the first quarter, it managed to reduce its inventory in the back half of the quarter by canceling orders and proactively implementing aggressive markdowns. By the end of the quarter, inventory was 14% lower than it had been a year earlier.

This inventory discipline and a modest return of retail traffic beginning in May enabled Dillard's to expand its retail gross margin by 2.4 percentage points year over year last quarter, even though retail sales plunged by 35%. It also managed to cut its operating expenses by 35%. Dillard's still reported a quarterly net loss of approximately $9 million, but that was considerably better than its $41 million net loss in the prior-year period.

Sales trends should improve somewhat in the second half of fiscal 2020. On average, analysts expect sales to fall 16% this quarter and 10% in Q4. Given that Dillard's exited Q2 with inventory down 20% year over year, the company is well positioned to continue increasing gross margin on a year-over-year basis, supporting its near-term earnings power. For the past 10 years, management has aggressively repurchased Dillard's stock with excess cash. The company's share count has declined by nearly two-thirds during that period.

After buying back 1 million shares for $62 million in the first two months of the first fiscal quarter, Dillard's stopped repurchasing stock for several months. However -- perhaps heartened by improving sales and margin trends -- it snapped up nearly 587,000 shares in July, at an average price of just $24.31. The company continued its buyback activity in August, repurchasing nearly 300,000 shares of Dillard's stock in the first four weeks of the third quarter.

As of late August, Dillard's only had 22.4 million shares outstanding, so the July and August buybacks alone shrank the company's share count by nearly 4%. Moreover, Dillard's ended Q2 with $192.6 million of remaining authorization on its share buyback program and $447 million of borrowing availability on its amended credit facility. Dillard's also tends to generate all of its free cash flow in the second half of the year and could easily achieve $200 million of free cash flow over the next two quarters.

Thus, Dillard's has ample capacity to buy back stock in the months ahead. Management -- which mainly consists of members of the founding Dillard family -- has leaned heavily on buybacks to support the value of Dillard's stock over the years. With the shares trading at a depressed valuation and Dillard's current assets and real estate likely worth significantly more than the company's enterprise value, there's no reason it would stop now.

A short squeeze could be coming

As of Sept. 15, bearish investors had shorted nearly 6.8 million shares of Dillard's stock: about 30% of the company's outstanding shares. However, the other 70% of the shares are held by an employee investment plan and members of the founding family. Thus, there are very few shares in circulation relative to the number sold short, creating ripe conditions for a short squeeze.

Positive news regarding Dillard's performance -- or perhaps progress toward a coronavirus vaccine -- could spark a big rally. Short-sellers trying to close their positions would be forced to bid against one another to buy relatively scarce shares of Dillard's stock. The more shares the company repurchases in the months ahead, the scarcer the stock will be.

Of course, there's no guarantee of a short squeeze. If Dillard's financial results take a turn for the worse in the quarters ahead, short-sellers could profit from a tumbling stock price. Still, between the already-low share price, Dillard's improving profitability, and management's aggressive buyback activity, bears may be walking into a trap by betting against Dillard's stock.