Please ensure Javascript is enabled for purposes of website accessibility
Log In Help Join The Motley Fool
Free Article Join Over 1 Million Premium Members And Get More In-Depth Stock Guidance and Research
By Adam Levine-Weinberg – Aug 14, 2020 at 8:21AM

The department store chain bounced back from a terrible first quarter with a surprisingly decent second-quarter performance.

The first quarter of fiscal 2020 was predictably awful for Dillard's (DDS 3.93%). The COVID-19 pandemic crushed retail traffic and eventually forced its stores to close temporarily. Most investors didn't expect the Southern department store chain to fare much better in the second quarter, which ended on Aug. 1.

As expected, sales plummeted again last quarter, and Dillard's reported another net loss. However, the company's loss actually narrowed compared to the weak results it reported a year ago. That was good enough news to send Dillard's stock soaring 20% in after-hours trading on Thursday afternoon -- while still leaving the shares more than 50% below their January highs. 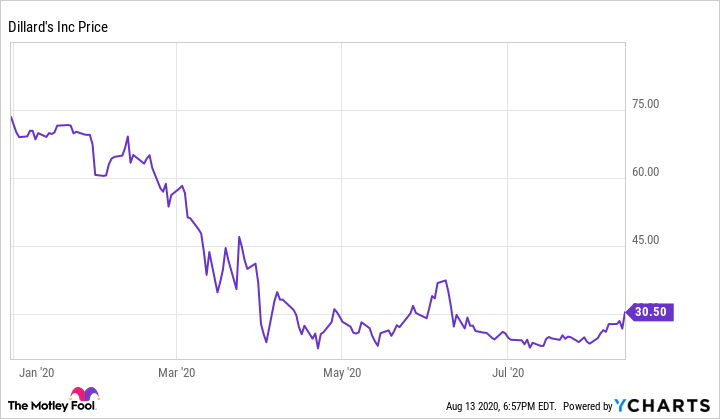 In the first quarter, Dillard's reported a 47% plunge in retail sales. While the retailer was slower than many peers to close stores in response to the pandemic, it suffered from having a weaker e-commerce business than rivals like Macy's. Dillard's e-commerce revenue totaled approximately $652 million last year, according to e-commerceDB, equivalent to just over 10% of total sales. For comparison, e-commerce accounted for about a quarter of Macy's 2019 revenue.

With sales virtually grinding to a halt during March, Dillard's found itself with an inventory glut, which it addressed by implementing steep markdowns. As a result, retail gross margin fell to just 12.8% in Q1, down from 37.8% a year earlier. That led to the company booking a $228 million pre-tax loss and a net loss of $162 million ($6.94 per share) in what is often the most profitable part of the year for Dillard's.

Dillard's second-quarter performance was surprisingly good by comparison. Retail sales did fall 35% to $893 million, and total revenue fell by a similar amount, landing at $945 million. This fell short of the average analyst estimate of $1.01 billion. However, the company's aggressive moves to clear inventory in March and April paid off, as retail gross margin rebounded to 31.1% -- up from 28.7% in the second quarter of fiscal 2019. The retailer was also able to reduce operating expenses by 35% last quarter, which was in line with its sales decline. That enabled Dillard's to limit its Q2 net loss to a modest $8.6 million ($0.37 per share), compared to $40.7 million a year earlier. Considering that the second quarter has been the weakest part of the year for Dillard's recently, this was not a bad result. On average, analysts had expected a massive loss of $4.54 per share.

The value of inventory discipline

Dillard's Q2 results highlight the importance of good inventory management in the retail industry. When retailers -- particularly sellers of fashion goods that go out of season and out of style -- order too much merchandise based on unrealistic sales goals, they are typically forced to take big end-of-season markdowns that hurt gross margin. This has been a recurring problem for Dillard's in recent years, contributing to substantial margin erosion over time.

Dillard's ability to get earnings close to breakeven last quarter -- in the middle of the pandemic and during a seasonally weak period -- suggests that investors may be underestimating the company's recovery chances. Right now, Dillard's stock trades at a substantial discount to its book value of nearly $60.

Long-term revenue growth is unlikely to materialize due to Dillard's aging customer base and a lack of investment in growth initiatives. Yet the company's Q2 results suggest that cost cuts and sharper inventory management could enable significant margin expansion even if sales never fully recover to last year's mark of $6.2 billion.

With sales of $5.5 billion and a 5% pre-tax margin -- better than its recent margin structure, but well below what it achieved five years ago -- Dillard's could generate record earnings per share of about $9 at its current share count. Dillard's stock buybacks could add to the EPS momentum. From this perspective, Dillard's shares appear extremely cheap.

That said, Dillard's is on pace to record a full-year loss for fiscal 2020, despite its better-than-expected Q2 performance. One promising quarter doesn't prove that tight inventory management and cost controls will enable sustainable margin improvement. Until the company returns to profitability on a full-year basis, Dillard's stock will remain a speculative pick suitable only for the most risk-tolerant investors.