The controversial company has interesting potential, but these red flags are holding me back for now.

On Wednesday, Sept. 30, big data software company Palantir Technologies (NYSE: PLTR) will debut on the New York Stock Exchange under the stock symbol "PLTR." Palantir won't be coming to market via an IPO, but rather via a direct listing, a process whereby a company's existing shareholders sell shares directly on an exchange without going through middleman investment banks to set a price.

Palantir is a controversial big data software and operating system vendor that has its roots in counterterrorism, with all branches of the U.S. military and special operations divisions as customers under its "Gotham" platform. In recent years Palantir has expanded into more commercial industries beginning in 2016 with the release of Palantir Foundry. Since then, commercial customers have grown to make up a 53% majority of sales in 2019. The controversial PayPal (PYPL 1.26%) founder, Peter Thiel, is also the largest shareholder and one of three founders who control the company.

Palantir has some intriguing positives going for it; however, even putting aside the political or sociological concerns around the company, I found three potential red flags in Palantir's S-1 filing that, purely from a financial standpoint, will likely prevent me from investing in the company on its first days of trading. 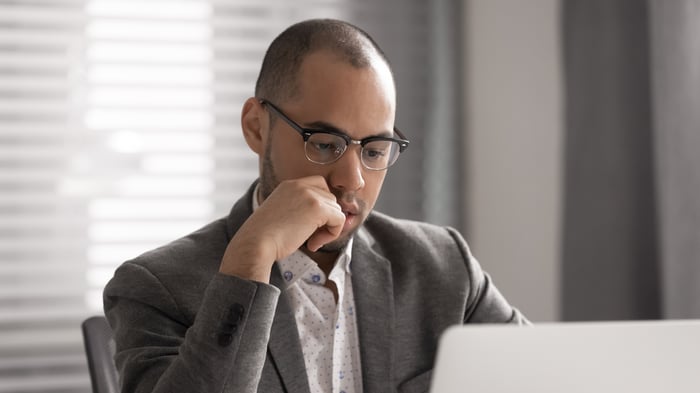 Some may have noticed the rather large net losses Palantir is generating, including a $598 million net loss in 2018, a $588 million loss in 2019, and an "improvement" to just a $165 million net loss in the first half of 2020. Those losses are larger than you'd expect for a software company that may make $1 billion in revenue this year. It turns out that a big chunk of those losses came through stock-based compensation, including $248 million in 2018, $241 million in 2019, and an increase to $182 million in the first half of 2020.

Within that, it appears not one but several top executives are paid very high salaries. In 2019, CEO Alex Karp was paid $12.1 million, co-founder and president Stephen Cohen was paid $16 million, and chief operating officer and executive vice president Shyam Sankar was paid $26 million.

It's a bit odd that the company has two executives who make more than the CEO. Also, though lots of tech companies tend to focus on "adjusted" numbers that strip out stock-based compensation, stock-based comp is an actual dilutive cost to shareholders, so it's not something to ignore. And that's especially true in Palantir's case, not only because it's so high, but also in combination with my second concern.

2. The three founders will control the company for a long time, no matter how much stock they own

Even after its shares trade publicly, the company will effectively be controlled by Karp, Cohen, and Thiel for some time to come. That's because in addition to having B shares, which give some insiders 10 votes per share versus the regular 1-for-1 A shares that will trade publicly, each founder also has 33.33% of Class F stock, which will have variable voting rights, giving Class F stock the ability to control up to 49.9999% of the voting power of the company. So, basically, if any of the founders still own any Class A or B stock, it will give the Class F holders majority say over company affairs.

I'm not against dual-class shares of stock, per se. Many big technology companies have dual classes of shares that give their founders significant control and have done just fine for shareholders. Still, the combination of high executive compensation and this highly unique third share class is somewhat concerning.

In addition, there appear to be significant "related party" transactions at Palantir, in which the company pays for services affiliated with other businesses owned or run by executives and board members. The company also lent founder Stephen Cohen $25.9 million back in 2016 at a 1.5% rate against 10.5 million of his company shares. In August 2020, the company allowed Cohen to repay that loan using 3.5 million shares of stock, or $7.40 per share, while also forgiving $800,000 of that loan. The payment basically assumed a tripling of the stock's worth while the company was private.

That may be somewhat reasonable considering what software stocks have done since 2016. However, the company had also just sold stock to entities affiliated with board members Alex Moore and Spencer Rascoff at $4.65 between April and June of this year. So essentially, the company let its board members buy stock at $4.65, then let its co-founder sell his stock to the company for $7.40 just two months later.

Considering control of these matters will remain with the company's three founders for the long haul, common shareholders may be susceptible to this kinds of executive pay dilution in the future, and would have no recourse.

Another potential Palantir concern isn't unique to Palantir by any means: customer concentration. Although Palantir has done a good job of expanding from government customers into commercial customers, it still has three large customers, each of which currently makes up more than 10% of overall revenue.

That's three customers making up 35% of Palantir's overall revenue base out of 125 total customers. While Palantir's enterprise data offerings are likely fairly "sticky," it's also a risk, should anything go wrong with any of these large customers. That concentration is a bit higher than you'll find in most other enterprise software companies and will be another factor that will likely keep me watching from the sidelines for now.