It's been a rough year for dividend stocks, with companies slashing payouts right and left in an effort to hold on to waning cash reserves. While this has naturally caused considerable stress for investors, it's also made it easier to discern the winners that have stayed the course in the market downturn.

If this year has taught investors anything, it's been that portfolio diversification and recession resistance are key factors to consider when determining whether to buy a stock. By purchasing shares of stalwart companies that have also consistently maintained and raised their dividends, you can build your portfolio while boosting your cash reserves for later reinvestment or to save for a rainy day. Many investors are anxiously awaiting another crash, but the truth is, there's no way to predict with exact certainty if or when the market will take a turn into bear territory.

Whether the next market crash is months away or further into the future, here are three high-yielding dividend stocks that you can buy and hold for years to come. 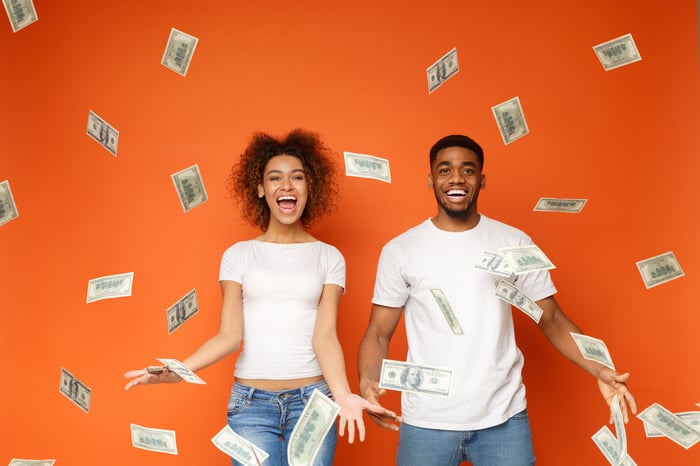 Telecom giant AT&T's (NYSE:T) dividend yields a juicy 7.4% for investors. The company has raised its dividend for 35 consecutive years, which makes it a Dividend Aristocrat. AT&T's impressive payout, coupled with its price-to-earnings (P/E) ratio of 17, is definitely drawing investors' attention. The stock is also absurdly cheap. Shares have been trading at about $30 since June, and the stock is currently down about 28% from January.

In the first and second quarters of this year, AT&T reported consolidated revenues of $42.8 billion and $41 billion, respectively. Services revenues were up 2.5% in the first three months of 2020, with a slight decline of 1.1% in this segment reported in the second quarter. AT&T's second-quarter operating income dropped by $4 billion year over year, while its operating income margin was just 8.6%. The good news is that the company has a solid cash position, which more than suffices to satisfy its dividend payout. At the close of the second quarter, AT&T reported free cash flow amounting to $7.6 billion, 49% of which it used to cover investor dividends. The company's cash from operations in the second quarter totaled $12.1 billion, while AT&T reduced its debt amount by $2.3 billion.

While a cheap share price doesn't necessarily mean a company is a good buy -- sometimes quite the opposite, in fact -- AT&T can still offer value for long-term investors in the current recession and beyond. AT&T is the top mobile services provider in the U.S., with a market share of approximately 40%. The company is also notably at the forefront of the 5G revolution. In the second quarter of this year alone, AT&T spent $1 billion on its 5G spectrum offerings. The company officially went live with its nationwide 5G connectivity availability on July 23. Shares of AT&T will likely gain considerable steam with the increased deployment and utilization of fifth-generation wireless technology in the coming years. Investors who buy the stock at its current low price could see notable returns over the next decade.

Biopharmaceutical giant AbbVie's (NYSE:ABBV) dividend yields 5.5%. AbbVie is also a Dividend Aristocrat that has raised its payout for 47 consecutive years in a row (counting its time as part of Abbott Labs), putting it within reach of being crowned a Dividend King. Shares of the company have almost recovered to its January trading price, and the stock is up 33% from its March low.

AbbVie has reported stellar financial results during the pandemic, most recently with its Q2 earnings report released July 31. Even though the company's acquisition of Allergan only concluded in early May, the stable of new drugs that the purchase brought into AbbVie's portfolio was a notable factor in the company's exceptional second-quarter results. AbbVie's revenue in the second quarter shot up by more than 26% year over year to $10.4 billion, while revenues in the company's hematologic oncology and immunology portfolios grew by 25.5% and 8.1% compared with the same period last year.

Worldwide revenues in the company's aesthetics segment (which it acquired from Allergan) were down 47.9% year over year due to the coronavirus. The company's neuroscience portfolio, which is largely comprised of products obtained in the Allergan acquisition, experienced a 100% increase in net revenue growth.

Looking at AbbVie's total revenues for the entire first half of 2020 ($19 billion), several products were key to the company's impressive balance sheet. Immunology drugs Humira, Skyrizi, and Rinvoq amassed revenues of $9.5 billion, $630 million, and $235 million during the six-month period. Hematologic oncology drugs Imbruvica and Venclexta brought in first-half revenues of $2.5 billion and $620 million, respectively. Hepatitis C treatment Mavyret and pancreatic enzyme replacement therapy Creon also comprised a notable share of AbbVie's first-half revenues. These products brought in total worldwide revenues of $935 million and $528 million during the first six months of 2020.

AbbVie's balance sheet is rock-solid. Trading at just 19 times earnings and for less than $90, the stock is still relatively cheap, especially taking its other indicators for continued growth into account. For example, it's collaborating with Danish biotechnology company Genmab (NASDAQ:GMAB) to develop and commercialize a range of antibody therapeutics. AbbVie also recently submitted applications to the U.S. Food and Drug Administration for two new indications for its blockbuster psoriasis drug Rinvoq -- one for adult patients with active ankylosing spondylitis (an inflammatory disease) and the other for adults with active psoriatic arthritis. These are just a few recent catalysts for the company's continued growth story. Analysts on Wall Street seem confident in AbbVie's future growth prospects, projecting that the company will increase its earnings by more than 8% each year over the next five years alone.

Walgreens Boots Alliance (NASDAQ:WBA) has raised its dividend every year for the last 44 years. The stock currently yields 5.3%. In the third fiscal quarter of the year, which concluded on May 31, Walgreens reported an undeniable negative financial effect from the ongoing COVID-19 pandemic of up to $750 million. This heavy financial loss was largely due to a notable decrease in retail sales during lockdowns, as well as a general decline in in-person medical provider visits. As a result, Walgreens reported a very modest 0.1% increase in sales for the quarter, or 1.2% on a constant currency basis, with total sales of just under $35 billion. The company's operating losses for the quarter were a cringeworthy $1.6 billion.

But Walgreens' fiscal Q3 balance sheet wasn't all bad news. The company reported a 3.2% increase in retail pharmacy sales in the U.S., although its retail sales in international markets were down 31.5%. Capitalizing on the heightened boom in online shopping during the pandemic, Walgreens reported a 23% year-over-year increase in digitally initiated sales during fiscal Q3.

The company boosted its net cash by $183 million year over year while augmenting its free cash flow by 24% to $2.4 billion. Another positive development in Walgreens' fiscal Q3 report was the company's announcement of a 2.2% boost to its quarterly dividend. Walgreens may be up against near-term pandemic headwinds, but it has robust cash reserves to fall back on, which have grown rather than declined during the pandemic despite its revenue fluctuations. As an essential business with a growing online presence, the company still makes a worthy contender for a recession-proof portfolio.