Please ensure Javascript is enabled for purposes of website accessibility
Log In Help Join The Motley Fool
Free Article Join Over 1 Million Premium Members And Get More In-Depth Stock Guidance and Research
By John Ballard – Sep 28, 2020 at 10:59AM

One of these e-commerce stocks could significantly outperform the other over the next five years.

Etsy (ETSY 2.01%) and Amazon (AMZN -1.63%) have benefited enormously from the shift to online shopping during the COVID-19 pandemic. Etsy stock has more than doubled year to date on top of two consecutive quarters of sales growth that are at holiday-season levels. Amazon has been on a hiring spree to help fulfill the wave of orders it is experiencing, and it's preparing to hire thousands more as it gears up for the holiday quarter.

We'll compare both companies to determine which stock has the highest return potential from here. 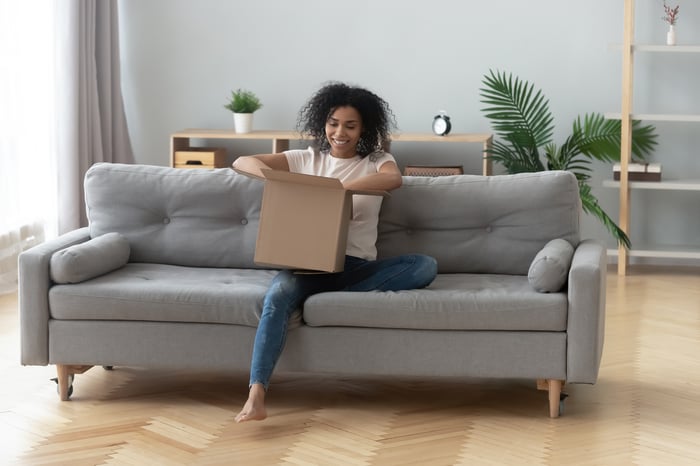 Etsy can do more than handmade products

A big difference between Etsy and Amazon is size. Etsy has the benefit of growing off a much smaller revenue base than Amazon, so if you want growth, Etsy might be the better stock for you.

Just before demand spiked during COVID-19, Etsy's revenue grew 35% year over year during the fourth quarter of 2019. But revenue growth accelerated sharply to 137% in the second quarter.

This doesn't take anything away from Amazon, which continues to report impressive numbers for its size. In 2019, Amazon grew revenue by 20%, which accelerated to 40% in the second quarter.

However, Etsy may have a longer runway to maintain high growth rates than Amazon. Etsy estimates its immediate addressable market to be approximately $100 billion, which is multiples higher than its current gross merchandise sales volume. Nonetheless, growth likely won't remain at recent triple-digit levels once the pandemic has passed.

Most importantly, Etsy is increasingly expanding beyond its niche of specialty items, helping millions of buyers and sellers connect across all retail categories.

The most telling category was apparel, where gross merchandise sales grew 59% year over year. Another eye-opener was beauty and personal care items, which jumped 187%. These categories tap into sizable markets where the largest retailers compete, and Etsy is proving it can hold its own.

Etsy has built a powerful platform in e-commerce that allows small businesses to reach a wide base of customers. Its investments in machine learning and search algorithms make the platform easy to browse, which explains the continued growth in active buyers that now stands at 60 million.

Etsy's success is particularly impressive since Amazon also offers handmade items from merchants. The problem for Amazon is that its handmade offering is buried on its website along with dozens of other retail categories, where it competes with its own third-party merchants. Etsy has an advantage in being solely focused on catering to the needs of small-store owners.

Amazon is a safe e-commerce stock. Investors will like that it not only delivers lots of growth, but it's become enormously profitable, thanks to the explosive growth in the Amazon Web Services (AWS) cloud business. Amazon's free cash flow came in at $31.5 billion over the last four quarters, representing an increase of 27% year over year, which is why this growth stock continues to climb, even at a $1.5 trillion market cap.

The growth of AWS is an important consideration when buying Amazon stock since cloud profits comprise two-thirds of its operating income. AWS has seen its growth decelerate recently, which may have something to do with increasing competition from other tech rivals, most notably Microsoft's Azure. But it could also be explained by the sheer size of AWS, which is now pacing to produce $43 billion in annual revenue.

Despite slowing growth, there is still a lot of growth potential with AWS over the long term. During the second-quarter conference call, management noted that it is seeing more companies wish they had made more progress transitioning to the cloud, given the advantage it provides in saving money over an on-premise server infrastructure.

Meanwhile, Amazon continues to experience momentum with its core retail business. It hired 175,000 new employees in April and is in the process of hiring another 100,000 before the holidays, as it tries to keep up with demand.

Amazon's ecosystem of services for customers, all revolving around its Prime membership program, is at the heart of its retail business. Management continues to identify more value it can add to the program, especially for customers in Australia, India, and the Middle East, where Amazon continues to focus its international expansion efforts.

Despite its sharp ascent this year, Amazon stock still has return potential over the next five years, based on its pre-COVID-19 growth. But Etsy has even more upside potential due to its relatively small size and the scale it is achieving as its platform becomes more widely adopted by sellers.

The writing is on the wall: Etsy is the better buy.