Investors have correction fatigue, and they're ready for a rebound.

September's been a lousy month for the stock market, but market participants seemed ready for a little sunshine on Monday morning. Investors have hoped that Washington would be able to put together another stimulus package to help support the U.S. economy, and favorable comments over the weekend seemed to open the door to further negotiations despite the contentious mood on Capitol Hill.

Some companies don't get much attention before they get off the ground, but for space tourism hopeful Virgin Galactic Holdings (SPCE 0.37%), stock analysts have taken a close look at the opportunity the company has to launch higher. Meanwhile, Uber Technologies (UBER -0.89%) scored a big win in London, and shareholders are excited about what that means for the ride-hailing giant. 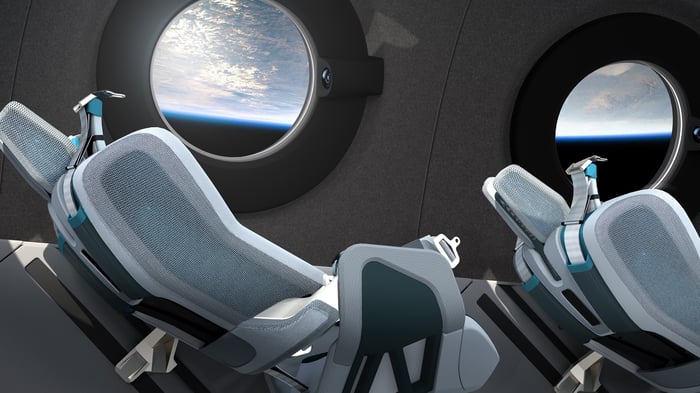 Bank of America started its coverage of the space tourism company with a buy rating. The banking giant pointed to Virgin Galactic's vertically integrated business, wherein the company itself handles key areas like manufacturing and assembly as well as development of engines and avionics systems. B of A pointed to the uniqueness of the space tourism business along with experience at the executive level.

Elsewhere, analysts at Susquehanna were a bit less enthusiastic. They gave Virgin Galactic a positive stock rating, but the $20 price target only matches where the shares now trade. Susquehanna warned that it could be years before Virgin Galactic achieves positive free cash flow or earnings, highlighting a risk for the currently unproven business model.

Until Virgin Galactic gets closer to launching its commercial service, the stock will be highly volatile based on hopes and predictions. Shareholders need to be prepared to weather turbulence well into the future if they believe in Virgin Galactic's long-term prospects.

Shares of Uber Technologies gained 5% Monday morning. The ride-hailing company got great news from the U.K., where it'll be able to operate in the country's largest city.

Uber had to go to court after London's key transportation regulator denied it a new license last year. Transport for London had argued that Uber drivers hadn't always followed through on their offers to take passengers where they wanted to go. The move had followed Uber's being granted a probationary license in 2017 after initially being denied.

However, a judge said Monday that Uber was "a fit and proper person" to conduct business. The decision gives Uber the right to operate for 18 months.

The move validates the ridesharing company's efforts to disrupt the transportation industry. Even though Uber has come under fire in several places, the tech stock has repeatedly found ways to rebound.