Last week, Uber (NYSE:UBER) CEO Dara Khosrowshahi bought $6.7 million worth of his company's stock at an average price of $26.75, roughly a 20% increase over his existing stake. Though the stock has bounced back above $29.50 as of this writing, Uber's stock is still well below the company's initial public offering price of $45.

Sentiment wasn't helped on Monday when news dropped that Uber was losing its license in London. The stock wasn't down that much, however -- just 1.5% on the day -- as the company will still be able to operate in the city as it appeals the decision. And the company claimed that it had already fixed the problem cited by Transport for London, the city's main traffic regulator.

Insider buys can sometimes be an indicator of a turnaround in a flagging stock, and the rather mild sell-off on the London news is intriguing. Is Uber's stock now too cheap to ignore, as Khosrowshahi believes? Here are some reasons Uber could be a compelling contrarian pick heading into 2020. 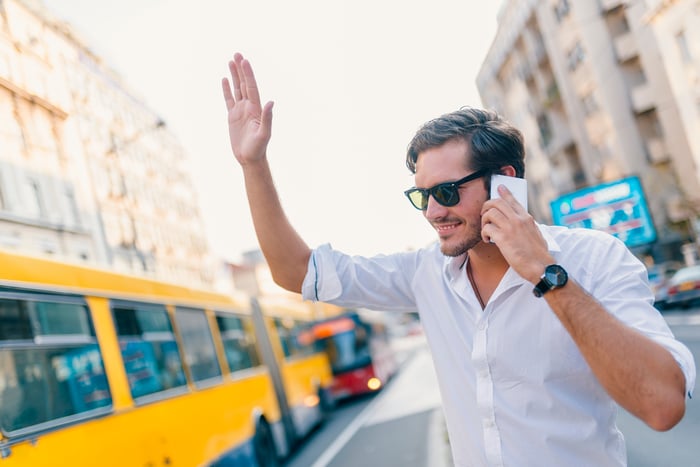 Its market cap is smaller than it looks

First, while the headline figure shows that Uber's market capitalization is $50 billion, the price you are paying for just Uber is a bit less than that. That's because Uber actually owns significant stakes in two other ridesharing platforms: an equity stake in DiDi Chuxing, the leading ride-hailing platform in China, and debt securities in Grab, a leading ride-hailing platform in Southeast Asia. These two holdings equate to around $10 billion in value.

So while Uber's headline market capitalization is $50 billion, its enterprise value (EV) -- which accounts for cash, marketable assets, and debt -- is only about $33 billion. That gives the company an EV-to-sales ratio of roughly 2.5, compelling for a company growing revenue 31% on a constant-currency basis.

But if Uber is still cheap on revenue metrics, investors are obviously quite nervous about profitability. Last quarter alone, Uber lost a whopping $1.2 billion.  Yet even on the profitability front, there were signs of potential improvement.

Is the core Rides segment profitable?

Uber recently updated segment-by-segment disclosures. While you are probably familiar with the core Rides segment, the company is investing aggressively to grow its other four businesses:

As you can see, the core Rides segment has actually improved profitability, with EBITDA growing 52% versus revenue growth of just 24%. Meanwhile, the big losses are coming from investments in the sub-scale parts of Uber, especially Eats.

One could make the argument that if Uber weren't investing in Eats, Freight, and future technologies, the company would actually be slightly profitable on an adjusted EBITDA basis, as the core Rides EBITDA is now fully covering corporate research and general and administrative expenses. That perhaps boosts management's recently stated goal of being EBITDA positive in 2021.

On the conference call with analysts, Khosrowshahi noted that the Rides business has "rationalized," meaning competitive pressure for market share has faded away, and prices are now rising. But the opposite is happening in Eats, with competition actually intensifying.

Could Uber win a "food fight"?

Though Uber is suffering deep losses in its Eats segment right now, it does have some unique competitive advantages over its pure-play rivals. First, as a platform, it can leverage its technology and drivers across both Rides and Eats, perhaps making Uber more efficient and lower-cost. Second, it has far, far more cash resources than its pure-play food delivery rivals.

For instance, competitor Grubhub (NYSE:GRUB) just reported results far below expectations, and only has about $400 million in cash versus $500 million in debt. Rival DoorDash is looking to have an IPO or direct listing next year to boost its cash resources, but has been cagey about releasing financials.  Another private rival, Postmates, just delayed its IPO in October, citing "market conditions" as the reason.

On that front, Khosrowshahi added:

Many of the start-ups in the food category have been trying to use cheap capital to buy their way to growth. But we've seen the capital is getting more expensive and can run dry, whereas platform leadership is both far cheaper and more permanent, when coupled with excellent execution. We believe that the online food delivery category could undergo the same move to more favorable market conditions that we have observed in Rides as companies contend with public market investors.

In other words, the pure-play food delivery start-ups have been playing above their heads with easy money. Now that venture capital and public investors are growing more wary of high-growth, money-losing companies, Khosrowshahi believes they won't survive against Uber's multisegment platform.

if Uber Eats emerges as a survivor after rivals fall by the wayside or merge, the segment could one day get a boost in profitability, as the Rides segment has. Since Eats is the biggest drag on profits right now, should that turn around, so will Uber's overall fortunes.

There are still execution risks with Uber. Not only are the London regulatory issues a potential risk, but labor issues are cropping up across the U.S., which could lead to more regulations and potential cost pressures on Uber's bottom line. In addition, don't forget that "adjusted EBITDA" neglects stock-based compensation, which is ultimately a dilutive cost to shareholders. Uber's stock-based compensation expense was a whopping $401 million in the third quarter. That means even if Uber is adjusted-EBITDA positive in 2021, it could still be losing $1 billion or so due to stock compensation.

These are reasons I'm not jumping into Uber's stock just yet. Still, Uber has greater scale and the capacity to burn more cash than competitors do. With the stock down so much from its IPO and the CEO loading up on shares, investors may wish to take a fresh look at the company in 2020, after many have dismissed it since going public.