Please ensure Javascript is enabled for purposes of website accessibility
Log In Help Join The Motley Fool
Free Article Join Over 1 Million Premium Members And Get More In-Depth Stock Guidance and Research
By Lawrence Rothman, CFA – Sep 29, 2020 at 10:00AM

Will a new basketball shoe give a lift to Dick's Sporting Goods?

A couple of years ago, Dick's Sporting Goods (DKS 8.15%) specifically called out Under Armour (UA 1.03%) (UAA 2.24%) for hurting its sales. Surprisingly, the two companies are teaming up in an exclusive arrangement in an attempt to provide mutual benefits.

Looking specifically at Dick's, will this help boost the sporting-good retailer's sales? 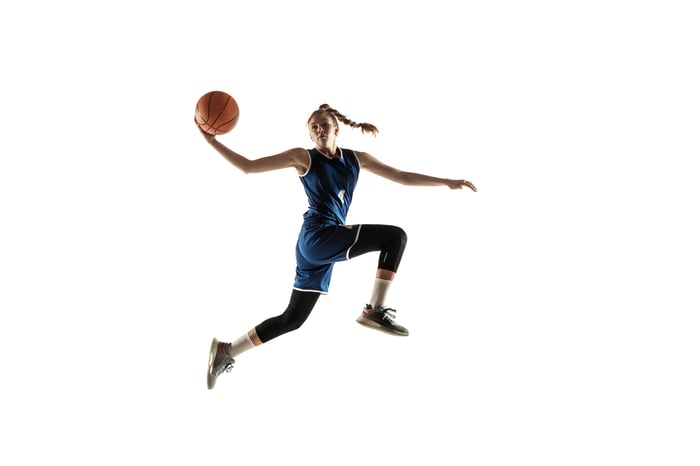 Under the deal that the two companies signed earlier this month, Under Armour will provide Dick's with its UA HOVR Breakthru, a woman's basketball shoe. Only the two companies will offer the product both online and in their stores, which they'll sell for $109.99 After Dick's saw a gap in the market for women's basketball shoes, it worked with Under Armour, which spent a year researching sneakers to create a product that's lighter, softer, and offers greater flexibility than men's shoes.

While it's comforting that Under Armour spent a lot of time and money on research and development (R&D) before putting out the product, there's no guarantee it will fly off the shelves and help Dick's sales.

The product was launched in the middle of September, so Dick's didn't start selling the shoes until about halfway through its fiscal third quarter, which ends around Nov. 1. Management will have its earnings call around Nov. 24, so investors will have to wait until then for an update.

Hopefully, the company will provide a sales figure, or at least provide information about how results stack up compared to its expectation. But since the product is new, it's probably wise to hold off passing judgment until Dick's reports fourth-quarter results.

On a positive note, Under Armour previously announced that Tyasha Harris, Bella Alarie, and Kalia Charles, players from the Women's National Basketball Association (WNBA), have agreed to wear the sneakers. However, there are well-entrenched competitors, notably Nike, that compete in this area, so success is not going to come easy.

Dick's has been doing just fine, even before the product launch. Its first-quarter same-store sales (comps) dropped by 29.5% due to store closures caused by COVID-19. However, its comps rebounded strongly with a 20.7% increase in the second quarter despite reopening only 85% of its stores. Before COVID-19 caused widespread shutdowns and stay-at-home orders, its 2019 comps rose 3.7% as the company successfully transformed its offerings.

The sneaker launch is the latest step in Dick's attempt to attract more women customers. Appealing to a wider audience is a good thing and may help boost its footwear business, which is about 20% of its sales.

But Dick's has its own private labels and carries a ton of brands. In fact, Nike, which represented 21% of its merchandise purchases last year, up from 18% a couple of years earlier, is much more important to the company's results. So the success of UA HOVR Breakthru likely means more to the struggling Under Armour than it does to Dick's results. Still, the sporting-goods retailer would undoubtedly feel better about Under Armour if the product is a success, which would only help broaden Dick's appeal and increase its sales.