Talk about an extra shot in your cappuccino: On Wednesday after market hours, coffee king Starbucks (SBUX 0.24%) announced a 10% hike in its quarterly dividend. The company is upping the payout from $0.41 to $0.45. The first distribution of the enhanced amount will take place on Nov. 27 to investors of record as of Nov. 12. At the latest closing stock price, the new dividend would yield just under 2.1%.

Starbucks celebrated the tenth anniversary of its dividend earlier this year. Since beginning the payout in 2010 at $0.05 (adjusted for a 2015 stock split), the company has declared a raise once annually, typically near the end of the year. 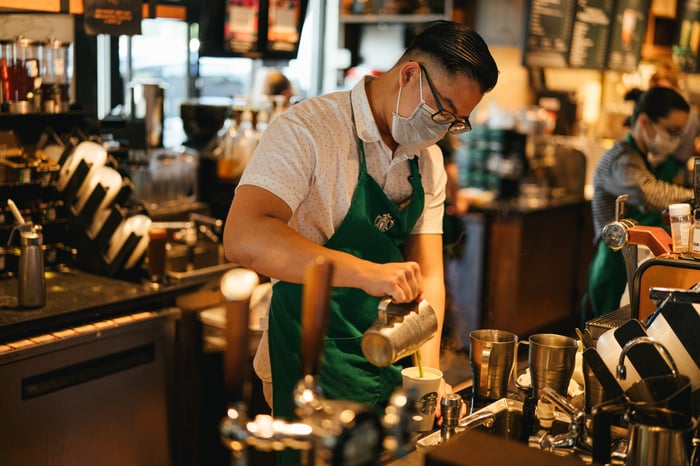 "The Board's decision to raise our quarterly dividend demonstrates confidence in the strength of our recovery and the robustness of our long-term growth model," CEO Kevin Johnson said in a statement. "Our cash flow generation is strong, and we remain committed to reducing our financial leverage while continuing to invest for future growth."

Johnson might be touting the long-term future because the current reality is harsh for the company. Like many big businesses with a large physical store footprint, Starbucks has struggled with the sharp decline of foot traffic due to the coronavirus pandemic.

In its most recently reported quarter, the company posted a sharp 40% year-over-year decline in same-store sales, in addition to a rare bottom-line loss. While its headline numbers beat the average estimates, that performance heightened the risks it's carrying as a ubiquitous retailer in nearly every town and city neighborhood in this country.