Please ensure Javascript is enabled for purposes of website accessibility
Log In Help Join The Motley Fool
Free Article Join Over 1 Million Premium Members And Get More In-Depth Stock Guidance and Research
By David Jagielski – Oct 3, 2020 at 6:03AM

They're not the safe investments that they were before COVID-19.

Investing in a real estate investment trust (REIT) can be a great way to earn a reliable dividend while getting exposure to a key sector like healthcare. However, the COVID-19 pandemic has turned many formerly safe investments into risky ones -- among them, healthcare REITs.

Before investing in one, you should consider those new risks. Here are a few underlying sources of uncertainty for these businesses, and reasons why you may want to avoid holding them in your portfolio.

Nursing homes may go out of business without government assistance

Most people are aware of the challenges nursing homes are facing today in keeping seniors safe, and how badly the pandemic impacted them in its early stages. Many elder care facilities across the country suffered particularly bad COVID-19 outbreaks, and their struggles still aren't over.

But there's another problem that many of them are facing -- the risk of closing up for good. In August, the American Health Care Association and the National Center for Assisted Living conducted a survey of nursing homes, and the results were concerning, to say the least. 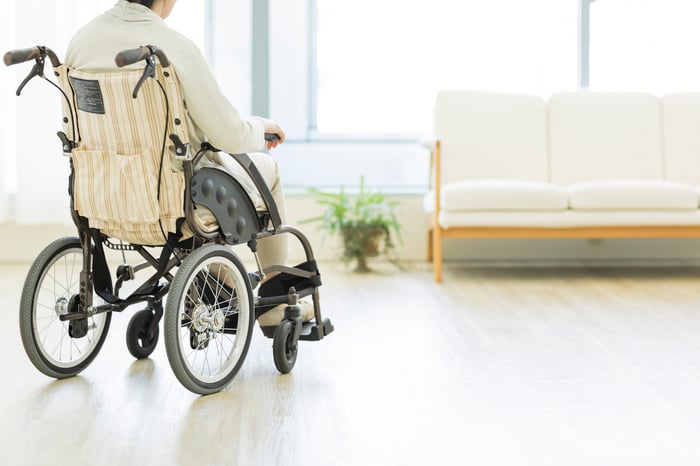 Of those nursing homes that responded to the survey, 55% said they were generating operating losses while another 34% reported profit margins of less than 3%. A total of 72% of nursing homes said they "won't be able to sustain operations another year at the current pace." And 40% responded that they wouldn't be able to stay afloat for more than six months under the new status quo.

Government funding, they said, would be crucial to keep these businesses going: 77% said it was "extremely important" that they get help from Washington to deal with COVID-19-related expenses.

While nursing homes and similar facilities are taking measures to reduce contagion risk to their residents and employees, those efforts come with additional costs for the businesses. In California, where close to 30% of the state's COVID-19 deaths occurred in skilled nursing facilities, the state is now requiring those facilities to add staff and also report deaths sooner (within 24 hours).

Welltower (WELL -3.24%) is one example of a stock that could be in trouble if senior living facilities struggle. In 2019, its senior housing segment contributed $3.5 billion to its top line, accounting for just over two-thirds of its $5.1 billion in total revenue. But it's not just that segment that carries added risk here. The company's triple-net business includes assisted-living and continuing-care retirement communities that may also feel the impact of the pandemic and the efforts to slow its spread. The healthcare industry is spending money on trying to keep its customers, patients, and employees safe. And the need to do that applies to many facilities, not just nursing homes, which is why healthcare REITs, in general, could be in trouble.

For now, things are still OK because tenants are largely continuing to pay their rent. In its second-quarter report, released on Aug. 5, Welltower indicated that it was still collecting (or approving the deferral of) more than 95% of the rent it was due during the period across its different segments. It also said that it collected 96% of the rent that was deferred and due in either June or July.

Total revenue for the period of $1.2 billion declined by 10%. The biggest drop-off was from its seniors housing segment, where revenue declined by 15% from the prior-year period to $773.7 million. The segment incurred a $47.3 million loss during the period. A year prior, it generated a profit of $94.2 million. The company's other segments remained profitable. Welltower blamed the disappointing performance on higher expenses combined with lower occupancy rates, which fell from 85.8% in February to 79.4% in July in its seniors housing portfolio.

Another rising wave of coronavirus infections could drag the performance of these businesses down even further, especially if facilities that are already struggling have to shut down for good or scale back their operations.

Investors should exercise caution when it comes to healthcare REITs. One of the reasons some investors favor these investments is because they pay dividends. (A REIT is legally obligated to pay out 90% of its earnings annually to shareholders). The problem is if the REIT isn't making enough money, then those payouts aren't safe. When Welltower released its first-quarter results on May 6, it announced it would be cutting its quarterly dividend by 30% from $0.87 to $0.61.

In Q2, its funds from operations (FFO) per share were $0.80, which gave Welltower a payout ratio of 76%. That left it plenty of breathing room. And even with the dividend cut, the stock still has a yield of 4.5% at current share prices, better than the 2% investors can expect from the average S&P 500 stock.

But if things don't improve soon for nursing homes and rent collection starts to deteriorate, it may only be a matter of time before Welltower tells investors that it's cutting the dividend again. And in the meantime, the stock price will plummet. Shares of the Ohio-based business are already down 33% in 2020 -- far underperforming the S&P 500, which is up 4% year to date. Its peers will face similar challenges.

If you're looking to invest in healthcare, consider stocks that don't have exposure to senior housing. Otherwise, you risk incurring significant losses, because the COVID-19 crisis isn't going away anytime soon.