You know what they say! To the most sensitive tests go the spoils.

Diagnostic tests for the coronavirus come in all shapes and sizes, and they vary dramatically in quality as well. One key test metric, sensitivity, is particularly important because it determines the lower boundary of how many viral particles a diagnostic can detect. If a test is highly sensitive, it can detect the presence of a very small number of viral particles within a sample. In contrast, if a test isn't very sensitive, it might register that the patient is negative for the coronavirus when in reality they are positive, but with fewer viral particles than the test can detect. This is an especially important consideration for tests designed to detect infection sooner, as patients will have fewer viral particles circulating in their systems early on compared to later in their illness.

Sensitivity isn't the only important metric for coronavirus diagnostics, but it is something that's relevant in terms of the competition for market share between the different test developers. All else being equal, sensitive tests are better than less sensitive tests, provided that they don't have a higher false positive rate. So earlier this month, when the U.S. Food and Drug Administration (FDA) released a list that ranked the sensitivities of the molecular diagnostic coronavirus tests on the market, it effectively created an independently verifiable standard that healthcare systems and investors could use to evaluate competing testing products. For investors considering a stake in a diagnostics manufacturer, the FDA's publication was a dream come true. 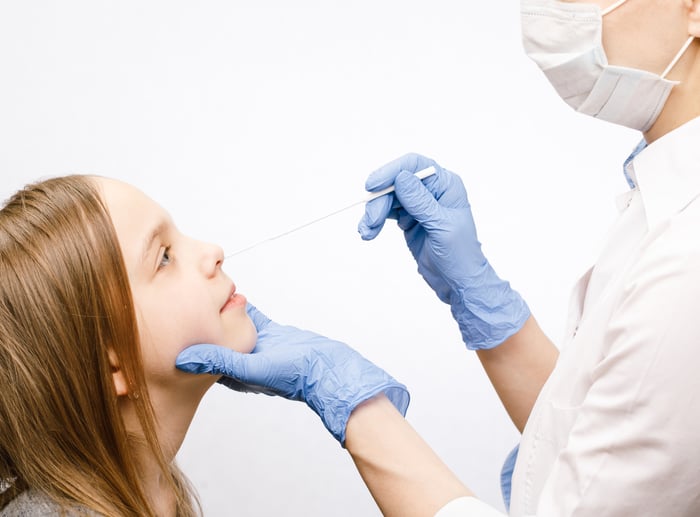 Whose tests fared the best?

PerkinElmer's (PKI 4.55%) New Coronavirus Nucleic Acid Detection Kit was found to be the most sensitive test, with the private companies ScienCell Research Laboratories, BioCore, and DiaCarta following shortly thereafter. Hologic's (HOLX 2.41%) Panther Fusion SARS-CoV-2 Assay and its Aptima SARS-CoV-2 Assay are also among the most sensitive on the FDA's list, as is Becton, Dickinson's (BDX 3.45%) BioGX SARS CoV-2 test for the BD MAX system. Interestingly enough, rapid tests didn't appear to be any less sensitive than non-rapid tests, though the FDA's list only accounted for molecular tests rather than the less sensitive but faster antigen tests.

In contrast to the winners, a pair of Quidel's (QDEL) and Fluidigm's (FLDM 2.21%) tests are at the very bottom of the list, with vastly less sensitive kits that require more than 1,000 times as many viral particles in a sample to test positive. Part of the difference stems from the fact that these less sensitive tests use different starting material than the more sensitive competition; Quidel's test uses a different type of nasal swab technique than what is standard, whereas Fluidigm's test uses a saliva sample. The worst-ranked diagnostics that used the same type of sample as the PerkinElmer kit were from Eli Lilly, (LLY 1.96%) QIAGEN, (QGEN 1.35%) and Luminex, (LMNX) all of which were of equal sensitivity.

There isn't yet any consensus on how sensitive a test needs to be in order to qualify as "sensitive enough." But so far, the FDA hasn't retracted the emergency use authorization (EUA) for any of the less sensitive tests. However, investors shouldn't take this to mean that test sensitivity is irrelevant to testing market share. Especially in regions where the testing strategy is skewed toward preventative epidemic surveillance rather than reactive testing of individual patients who may be infected, the highly sensitive tests have a massive advantage, and healthcare investors should act accordingly.

Because symptoms are connected to the amount of viral particles circulating in a patient's body, asymptomatic patients are more likely to trigger a positive reading from a more sensitive test. In other words, a healthcare system that's testing people who appear to be healthy will have significantly more luck in identifying asymptomatic patients, thereby allowing them to more effectively prevent further spread of the virus. In areas where the pandemic is less controlled and the testing strategy aims to cheaply serve incoming patients who already feel sick, the appeal of a highly sensitive test is much lower.

The most sensitive tests should win out

As more regions get the pandemic under control and shift their strategies to prevention rather than mitigation, sensitive tests may be in higher demand compared to their less sensitive counterparts. There's no guarantee that PerkinElmer's diagnostic test will gain market share in comparison to Becton, Dickinson's test, because their sensitivity is broadly similar, but it's safe to say that Eli Lilly and Luminex may soon need to spend more on developing more sensitive tests if they want to retain their foothold in a swiftly evolving testing market.