With traders everywhere scrambling to pick up the best coronavirus vaccine stocks amid a volatile and unpredictable market, it's no surprise that long-term-minded biotech investors are looking for companies that will provide lasting returns. In my view, the best biotech companies have a narrow strategic focus that they hammer on from multiple angles with cohesive product development, thereby capturing a larger share of their target markets in comparison to the competition.

These companies may frequently appear to be passing up opportunities to expand into hot new areas, but it's all part of the plan: Chasing emerging markets might put a business at odds with developing deeper competence within its niche, which could spell disaster in the long term. Both of the companies I'll discuss today have carefully tailored their operations to their specific markets, and they haven't deviated much from their intended course, even in the face of setbacks. Furthermore, both have exciting projects in late-stage clinical trials, so they're timely to purchase.

Let's explore what makes these two stocks compelling options for biotech investors with any size portfolio. 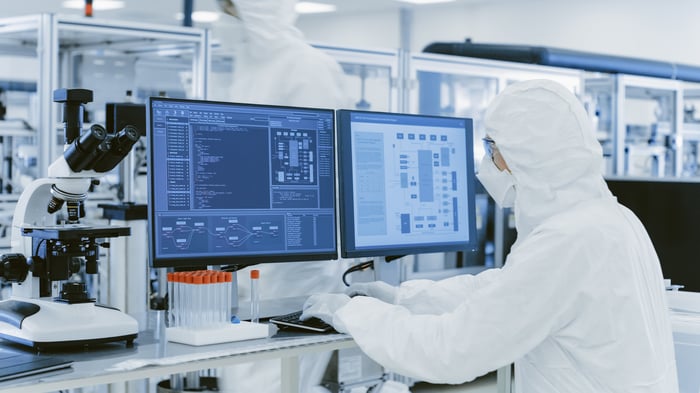 Vertex Pharmaceuticals (NASDAQ:VRTX) focuses on developing drugs for serious and rare diseases, and it has several approved therapies for cystic fibrosis (CF), which is its area of specialization. The company has spent the lion's share of the past decade refining and repackaging its successful therapies so that it can penetrate new segments of the market.

And keeping its focus on CF has been highly effective for Vertex. On top of its expected CF revenue of $5.7 billion in 2020, the company has a profit margin of 38.5%, year-over-year quarterly revenue growth of 62%, and barely any debt in comparison to its $5.5 billion in cash on hand. All of these are excellent signs for potential investors.

No chunk of the CF market is too small for Vertex to attack. On Sept. 25, Vertex reported that the U.S. Food and Drug Administration (FDA) had granted yet another expanded approval for its drug Kalydeco, giving the company the green light to sell the drug to treat patients between four and six months of age. Impressively, Kalydeco was first approved more than eight years ago, but Vertex hasn't stopped developing it.

While this new approval may not drive that much additional revenue growth, it's a testament to the company's long-term commitment to its target patients, not to mention its ability to extract value from prior investments. Vertex is also pushing even deeper into its niche in a new collaboration with Moderna (NASDAQ:MRNA) which seeks to develop new CF therapies with gene-editing technology. In the long term, Vertex will continue to work on early-stage projects that will diversify the company into other disease areas, but for now, it's clear that it still has plans to continue growing its revenues from CF medicines.

Intra-Cellular Therapies (NASDAQ:ITCI) seeks to treat neuropsychiatric diseases like schizophrenia and major depressive disorder. Unlike Vertex, ICT isn't profitable yet, and it only has one drug approved for sale. The drug, called Caplyta, is notable because it has the potential to treat a bevy of different neuropsychiatric conditions beyond the schizophrenia indications for which it currently has approval. In particular, ICT is currently working on several clinical trials with Caplyta for conditions like behavioral disturbances in dementia. 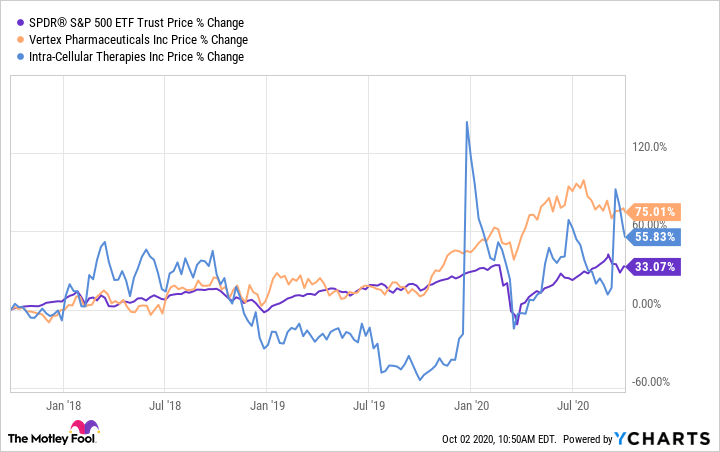 The company has already had success in expanding its market for Caplyta. In early September, Intra-Cellular Therapies reported that its clinical trials had found the drug to be effective as an adjunct therapy for bipolar depression, causing its stock to soar. This means that the company will likely file for full regulatory approval as early as next month, so investors can expect new revenue growth through 2021. What's more, the company is already working on obtaining regulatory approval to sell Caplyta as a standalone therapy, which will increase the size of its potential market by a significant amount.

Expanding its Caplyta revenues will help to solve the company's current unprofitability. As Intra-Cellular Therapies continues to grow, it'll also be able to take on new debt to help fuel its research and development efforts. This is an important consideration, because it currently has only $25.1 million in debt against $407.8 million in cash and trailing revenues of $3 million. Once Intra-Cellular Therapies has built itself a niche in its target markets, it will have free rein to build out its pipeline even more, thereby securing its long-term prospects in the process.