News that Trump was scheduled to return to the official residence powered Regeneron to a 7%-plus gain on the day. It's worth noting that Trump was also given remdesivir, the repurposed antiviral drug from pharmaceutical industry peer Gilead Sciences (GILD 3.09%); however, that company's stock rose a comparatively light 2.3% on Monday. 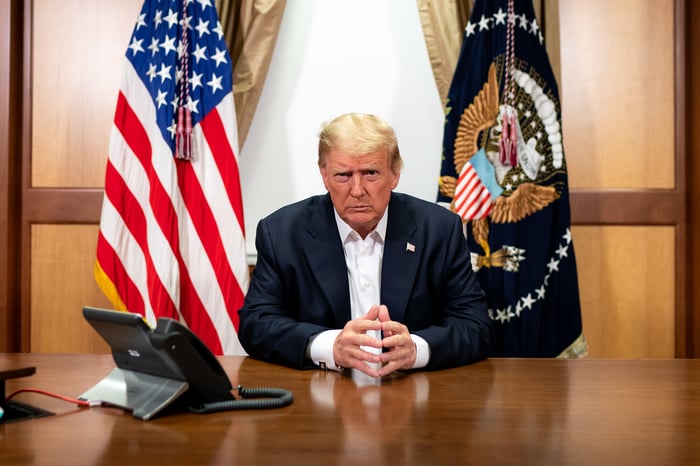 Regeneron's REGN-COV2 is a cocktail of two antibodies, which are proteins manufactured by the body's immune system to combat illnesses.

It's been in the news lately because last week, Regeneron published the first results from its phase 1/2/3 clinical trials indicating that the candidate is effective in fighting the disease.

The first 275 patients tracked in the study had mild to moderate forms of the illness, and those administered the cocktail demonstrated notable reductions in viral load. Only two developed side effects, and they were taking placebos.

While REGN-COV2's published results were very encouraging for shareholders, and its use in Trump's treatment was also a heartening sign, there are still more questions than answers regarding its future. It requires much more clinical testing, so potential regulatory approval and a positive outcome for the company are in no way assured. While it's reasonable for investors to be somewhat optimistic about Regeneron stock, some caution is warranted here.