Looking at GE's stock potential in the light of a listing from its key rival.

The recent spinoff of Siemens Energy provides General Electric (GE -2.56%) investors with a good handle on what the market may be willing to pay for GE's renewable energy and power businesses in the future. As such, it helps investors understand the long-term value opportunity with GE stock. Here's the lowdown.

GE and Siemens are fierce rivals that compete across a number of end markets, notably the power market (gas turbine equipment and services), renewable energy (wind power), and healthcare equipment. As such, three of GE's four industrial segments are in direct competition with Siemens. Fortunately, all three of Siemens' businesses that compete with GE are publicly listed, so investors can get a fix on what the market might pay for GE's businesses by looking at what the market is paying for Siemens businesses. 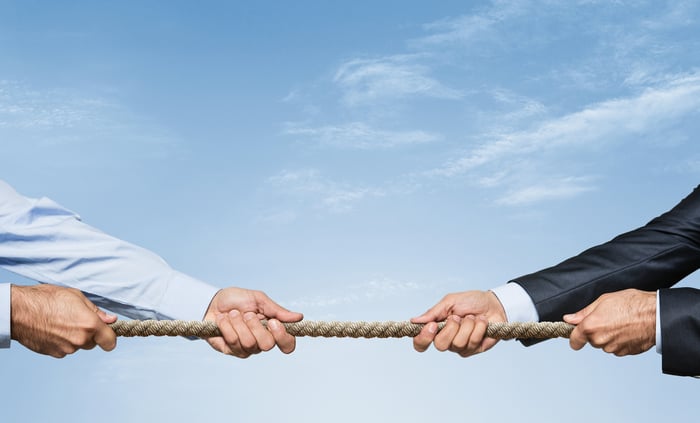 Let's start with GE's healthcare business, as it's the easiest to measure. Siemens Healthineers is a publicly listed company currently trading at 25 times its estimated free cash flow (FCF) for 2021. Assigning that multiple to the $1.2 billion in FCF generated by GE Healthcare in 2019 would mean a $30 billion valuation for the segment. Now let's turn to GE's power and renewable energy businesses.

Siemens Energy -- which started trading in late September -- is a combination of Siemens' 67% stake in listed company Siemens Gamesa (renewable energy), and Siemens' gas and power business. The recent spinoff has fared reasonably well, and the market initially priced Siemens Energy at around 16.1 billion euros.

We now turn to the question of what this valuation means for GE's power and renewable energy segments. While the industrial businesses are fierce competitors, it's fair to say that Siemens Energy is performing significantly better. In fact, GE's game plan is to get margin, at both businesses, somewhere near what Siemens Energy is generating right now.

For example, while Siemens Energy generated 876 million euros in FCF in 2019, GE Power and GE Renewable Energy had a combined outflow of $2.5 billion worth of cash.

Similarly, Siemens Energy's adjusted earnings before interest, tax, depreciation, and amortization (EBITDA) before special items was 1.5 billion euros with a 5.3% margin. After an understandably difficult 2020, Siemens Energy expects to get adjusted EBITDA margin in the 3%-5% range in 2021 and then to the 6.5%-8.5% range in 2023. In contrast, GE's power and renewable energy businesses lost a combined $280 million in 2019. 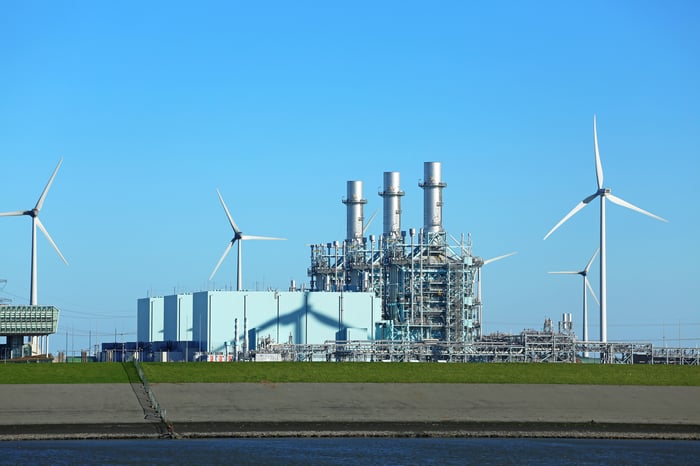 Ultimately, GE's aim is to get the kind of mid- to high-single-digit profit margin of its German peer, and in doing so, start to generate FCF from GE Power in 2021 and GE Renewable Energy possibly in 2022. Clearly, it's going to take time to turn GE's power and renewable energy businesses around.

However, with a combined revenue of $34 billion in 2019 and low-single-digit growth prospects if GE can get both businesses to the kind of margins enjoyed by Siemens, then it's not difficult to see GE generating, say, $2 billion within five years. Based on Siemens' current multiple, that could mean a market cap of $36 billion for GE's power and renewable energy in the future.

To put all of this into context, GE's market cap right now is just $54 billion. That's a figure that makes the assumptions for GE's business in this article look extremely attractive. Moreover, no mention has been made yet of the powerhouse of GE's earnings and cash flow, namely GE Aviation.

On the other hand, it's going to be a while before GE's power and renewable energy businesses start generating cash, and it will be a few years before the commercial aviation market gets back to 2019 levels; GE Aviation is set for a slow recovery at best.

The best way to think about it is that, based on Siemens' company valuations, GE is a very good value provided it can hit its long-range targets. However, hitting those targets will take time, and investors need to be very patient.