Shares of the pizza chain pulled back after profits were lower than expected, but investors should take advantage of the discount.

Shares of Domino's (DPZ -0.39%) fell 7% following its third-quarter earnings report on Thursday, as the pizza delivery giant missed expectations on the bottom line, despite another round of blowout sales growth.

Still, the sell-off looks like a buying opportunity. Here's why.

Domino's has now posted same-store sales growth for 107 straight quarters internationally and 38 quarters in the U.S. Almost no other restaurant chain can claim a streak like that. The recent comp sales boom over the last two quarters shows that the franchise-based company still has room to grow at the restaurant level, and Domino's continues to open new stores at a brisk rate. The company now has 17,256 locations globally -- with about two-thirds located outside the U.S. -- and has added 728 over the last four quarters even with setbacks from the pandemic.

With its low-cost footprint and simple operating model, Domino's has been popular with franchisees both inside the U.S. and outside, and the universal popularity of pizza has made the brand successful all over the world. Additionally, the company's investments in technology have helped it stay ahead of the delivery curve and made it especially relevant in the mobile era. Management sees room in the market for 30,000 restaurants, nearly double what it has today, and that market could expand as living standards rise in the developing world. By comparison, McDonald's has about 39,000 locations globally.

Domino's self-contained pizza delivery model gives it an advantage over other fast-food chains that rely on third-party delivery providers like DoorDash and Grubhub. Its emphasis on value should also help drive business during a global economic crisis. 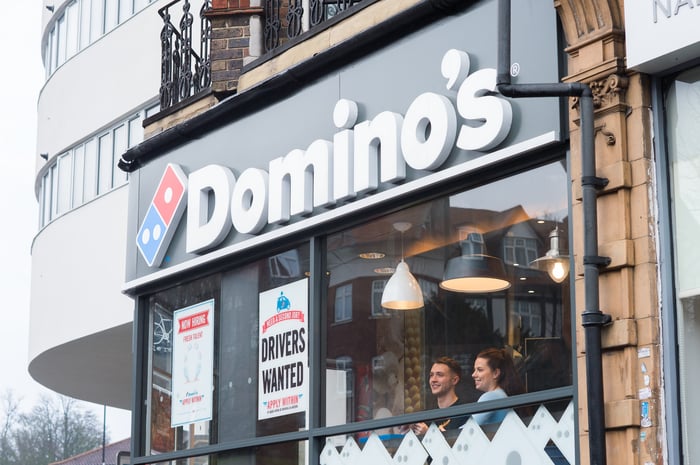 Domino's has been one of the best stocks to own over the last decade, as the pizza chain's turnaround has led to a roughly 2,650% gain, crushing every other restaurant stock. Despite that track record, its growth opportunities, and advantages over more conventional fast-food chains, Domino's trades at a significant discount compared to peers like Chipotle, Shake Shack, and Wingstop.

While Domino's is a more mature company than those peers, it is still delivering outstanding growth, and its double-digit comp sales increase in the middle of a pandemic shows how resilient the brand is. Based on this year's expected earnings, the stock is trading at a price-to-earnings (P/E) ratio of just 31, essentially equal to the P/E valuation of the S&P 500 at 29.6 -- even though Domino's offers much better growth prospects.

Combine that with a modest dividend and a commitment to share buybacks, and the stock has all the tools to outperform the market over the long term.

Domino's is the rare "stay-at-home" and consumer discretionary stock that can do well both during the pandemic and after it ends. Much of its competition -- including independent restaurants -- has been decimated by the crisis. For investors who missed an opportunity earlier on, now looks like a great time to take a bite of this hot pizza slinger.

Domino's Pizza Stock Jumped on Its Earnings Release: What Investors Should Know
376%