Investors interested in Gilead Sciences need to look forward, not backward, to avoid the common trap of thinking history will repeat itself.

I recently came across a quote from Woodrow Wilson highlighting the difference between things that follow a set of rules and those that react to changes and evolve. Wilson called the latter "accountable to Darwin," the former to Newton. It occurred to me that many investors, myself included, often fall into the trap of believing that the market is rational, i.e., accountable to Newton -- when in reality, we should be looking to Darwin.

If investing followed a logical set of rules, a successful strategy in the past would naturally be successful the next time. But in investing, that type of thinking can be a costly trap. A real-life example is Gilead Sciences (GILD -0.44%), where management is attempting to repeat a strategy that led to a soaring share price and booming profits a decade ago, and investors should beware. 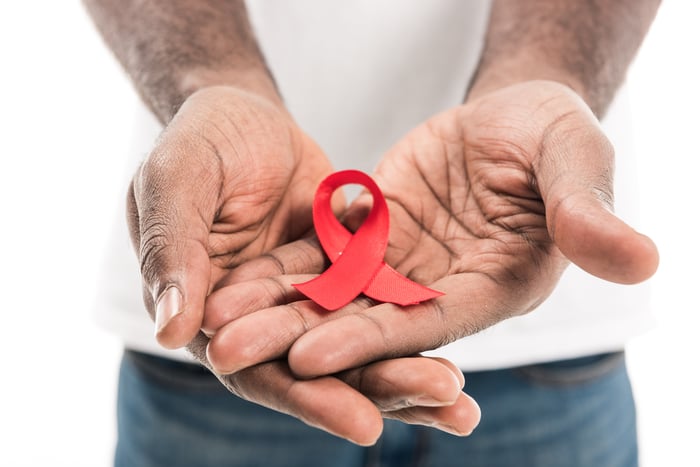 Over its nearly 30-year history, Gilead has ridden a portfolio of drugs for viral diseases, inflammatory diseases, and cancer to an $80 billion market capitalization. There were two big boosts in its revenue during that time, the first thanks to the 2001/2002 approval of the company's HIV treatment by U.S. and European regulators, and the second to the 2013 approval of its revolutionary hepatitis C cure. A 10-year chart of revenue shows the effects of these two treatments. The chart also shows the drop-off over the past few years as Gilead's hepatitis C drug faced competition from AbbVie (ABBV -0.36%) and cannibalization from the company's own generic replacement. 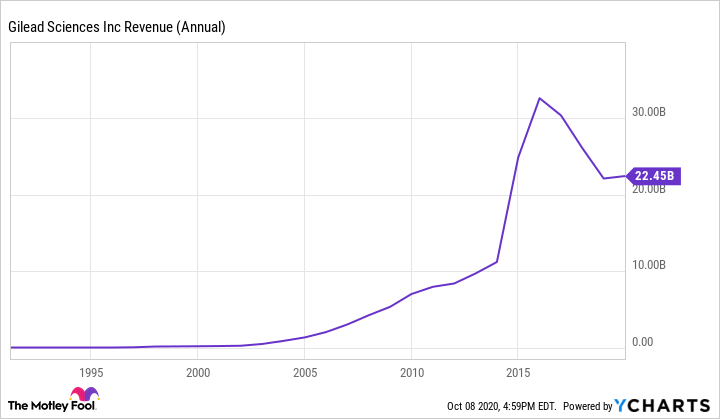 In anticipation of the drop in sales, management has made several large acquisitions over the past few years. The $11 billion purchase of Pharmasset for its hepatitis C drugs in 2011 defined the company for years; while it was widely questioned at the time, many have since hailed it as the best biotech deal of the decade. Management has tried several times to replicate that success in the past few years.

Gilead has had three CEOs in the past five years, and each has left their mark. John Martin, the company's CEO from 1996 to 2016, built an impressively profitable business by developing the first HIV drugs and then acquiring the hepatitis C franchise. Over the past few years, profits from these drugs have fed shareholder returns through extensive dividends and buybacks. 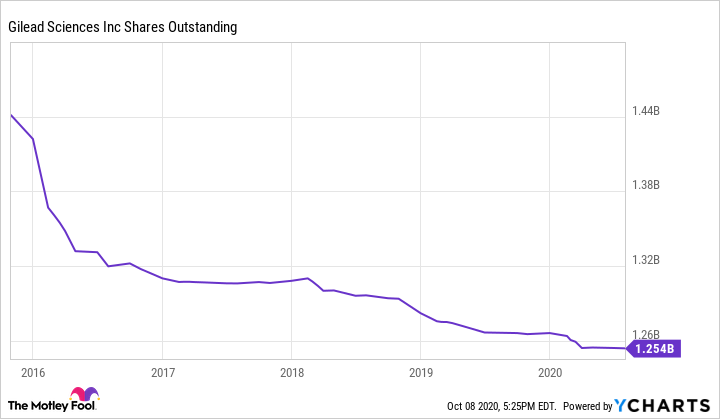 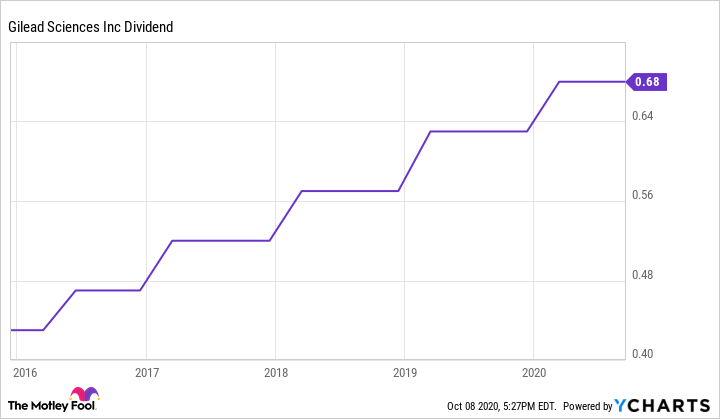 John Milligan, who initially joined the company in 1990, only served in the top seat for three years (2016 to 2018) but was a natural extension of the previous regime. His 2017 acquisition of Kite Pharma for $11.7 billion attempted to shift the company toward the burgeoning science of chimeric antigen receptor (CAR-T) therapy. This approach uses the patient's own immune system to find and kill cancer cells. Although Kite's first drug using this novel approach was approved shortly after the deal, it took the company into a new direction -- oncology -- and away from the antiviral market where it had once seen such success. It also added significant debt to the balance sheet. 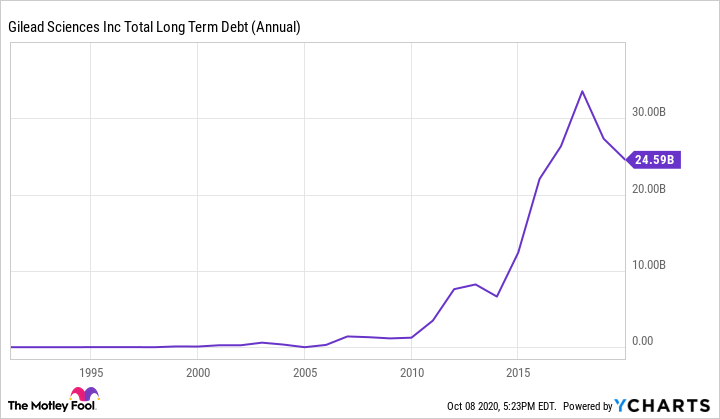 Daniel O'Day took the helm in early 2019 and promptly spent $5.1 billion for a stake in Galapagos (GLPG 0.41%), a company developing treatments for diseases such as rheumatoid arthritis and inflammatory bowel disease. O'Day followed this up by purchasing Immunomedics (IMMU) for $21 billion last month, giving Gilead a drug that has been granted accelerated approval for certain types of breast cancer.

So far, investors haven't been impressed with the strategy and are focusing more on the falling sales of the company's legacy drugs than the potential of newly acquired and developed treatments. The deals have not moved the share price from multi-year lows. 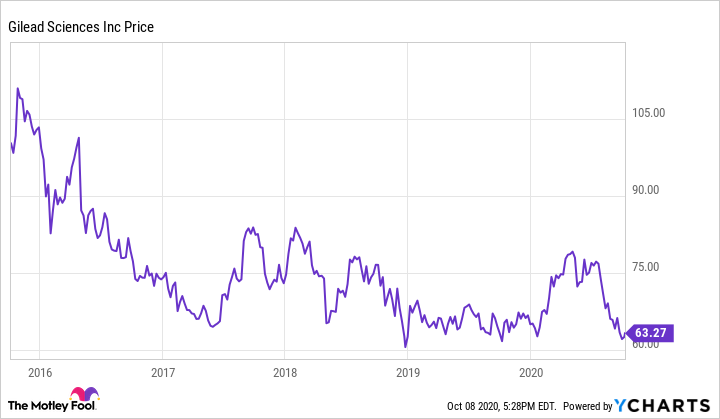 All your eggs in one basket

With 42 clinical-stage programs, Gilead's best days may very well lie in the future. The company has a portfolio that now targets viruses, inflammation, and cancer -- all large markets, to say the least. However, the Kite acquisition has yet to produce much sales growth, and sales of non-HIV products declined in 2019. While the HIV drugs did see modest gains, they make up more than 70% of sales, a higher percentage than ideal.

Further complicating the reliance on HIV sales is a legal battle between Gilead and the U.S. government over the patent to its flagship HIV prevention drug, Truvada. In late 2019, the Department of Health and Human Services sued Gilead over patent rights to the HIV prevention drug the company has relied on for more than 15 years, as well as Descovy, the one that was approved in 2016. This isn't just a risk to future revenue -- the government is also claiming it is owed royalties, which could amount to billions of dollars.

For its part, management has counter-sued, claiming the government sought patents without notifying the company, violating the terms of a partnership that goes back nearly two decades. Before filing that suit, the company lost an appeal to the U.S. Patent and Trade Office asking it to review the patents held by the government.

With sales lagging and a fight underway with the government over the company's primary product, many investors are understandably shying away from Gilead stock. A few big deals -- and recently, the use of the company's drug remdesivir to treat severe COVID-19 patients -- have provided some positive headlines, while the allure of a hefty dividend, share buyback program, and depressed valuation have kept a few investors hanging on and hoping for the next blockbuster.

This isn't unusual behavior, but it does follow Newton, not Darwin: It relies on the fallacy that something that happened before should happen again. Given its new management team, a different area of clinical focus that features greater competition, and a more difficult financial situation, Gilead's past has little to do with its future -- and that means there are probably better companies to buy for investors seeking exposure to the pharmaceutical industry.