This is not completely a numbers-driven decision.

McDonald's (MCD) and Dunkin' Brands (DNKN) both derive most of their revenue from franchising. Through this model, McDonald's now has over 39,000 restaurants in more than 100 countries. Dunkin' has not grown to quite that size, but it franchises about 11,300 locations in the U.S. and 36 other countries.

Investors might wonder if the path to greater potential returns goes through the golden arches or a coffee and doughnut run. Though financials drive a significant part of this choice, the decision may also hinge on an often-overlooked factor.

Analysts project McDonald's will experience a massive drop in profits this year before making a dramatic recovery in 2021 -- a fairly common forecast for businesses heavily impacted by the COVID-19 pandemic. For the fast-food chain, this is expected to translate into about 4% profit growth over two years. Also, at current prices, McDonald's sells for around 28 times forward earnings.

When one thinks of McDonald's, it's natural to picture the classic hamburger restaurant. However, as investors, we need to understand that McDonald's is a real estate company at heart. Franchisees must not only pay substantial fees to use its name and products, they also must lease their properties from the corporation. This has given McDonald's some of the world's most valuable real estate. Still, none of this protected it from the revenue slump as these fees fell amid declining sales in the second quarter.

Also, the company continues to derive the majority of its revenue from the franchises, not sales from its company-owned restaurants. Independent local business owners own and operate around 93% of McDonald's locations.

The company just raised its dividend. It will now pay investors $5.16 per share annually; at current share prices, that amounts to a yield of about 2.3%. It has increased its payout every year since 1976. 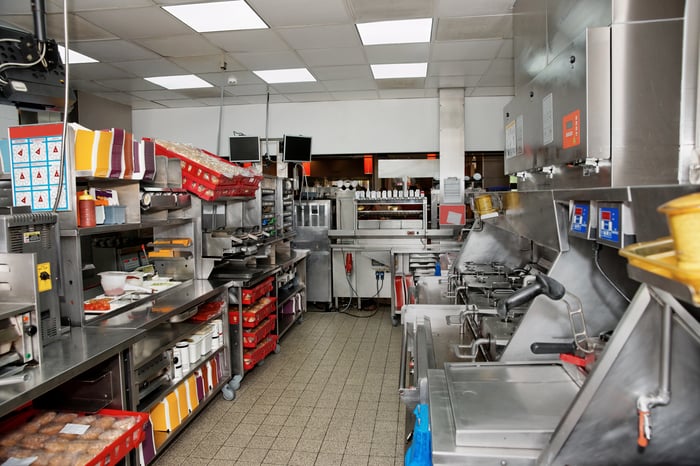 Like McDonald's, Dunkin' appears to serve income investors well. It has increased its dividends every year since it began distributing them in 2012. At current prices, its annual payout of $1.61 per share yields about 1.9%.

Due to the pandemic, analysts expect its profits will fall by almost 2% over the next two fiscal years. Its forward P/E ratio is just below 27, only slightly lower than that of McDonald's.

Dunkin' has also made some significant changes. It dropped "Donuts" from its name in 2018 in hopes of building more of an identity around its other menus items -- specifically, its coffee drinks. Moreover, as the owner of Baskin-Robbins, it also derives a portion of its revenue from ice cream. Some of the company's locations feature only one of those chains; others combine both under one roof. Nonetheless, the interior of the stores is conducive to either experience.

Unlike McDonald's, Dunkin' earns the majority of its income from royalty fees, which amount to a percentage of a store's sales. However, it also earns money from rental income. Revenues from both sources have fallen this year as the company provided some franchisees with rent waivers amid the sales slump.

Both of these companies have experienced similar struggles during the pandemic, and both stocks traded in similar patterns over the last year, though Dunkin' has in recent weeks slightly outperformed McDonald's. 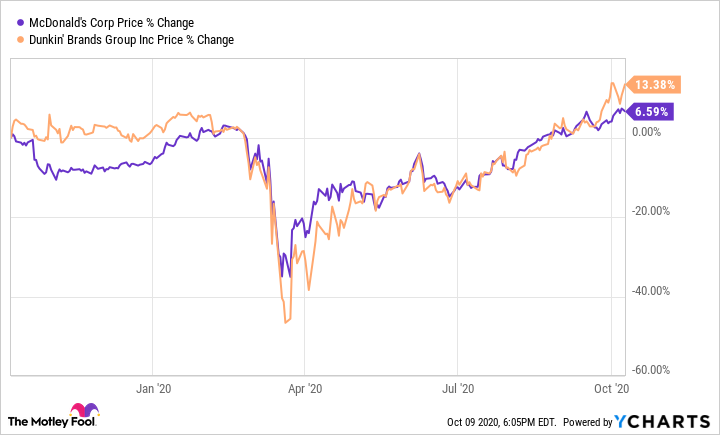 Nonetheless, despite its slightly higher forward multiple, McDonald's looks like it has the potential to be a more lucrative investment, due to its profit growth and marginally higher dividend yield. However, McDonald's may also hold the lead in a critical intangible.

For all of the menu tweaks it has made to attract health-conscious or coffee-oriented consumers, McDonald's has remained faithful to its customer identity as a fast-food hamburger joint.

On the other hand, Dunkin' claims to now brand itself as a "coffee-focused chain" -- but it doesn't offer the coffeehouse experience of a place like Starbucks. The interior of its stores still suggests a focus on donuts. This stands in contrast to McDonald's, and may put Dunkin' at a disadvantage with coffee-focused customers.

Admittedly, Dunkin' has built up a large cache of brand loyalty and will most certainly continue to earn a significant portion of revenue from selling coffee. Nonetheless, it may have to take the coffee experience to the next level to lift its sales -- and ultimately, its stock price -- to their full potential.