The online retailer rises on enthusiasm for e-commerce and Chinese tech.

Shares of JD.com (JD 5.00%) were moving higher today on a broad-market surge that seemed to favor both e-commerce stocks and Chinese companies. Though there was no specific news out on JD.com, a renewed bout of enthusiasm for e-commerce names and Chinese tech combined with growing confidence that Joe Biden would win the election to propel the stock higher.

As of 12:47 p.m. EDT, JD shares were up 5.9%, while the Nasdaq had gained 2.8% at the same time. Overnight, the Shanghai Composite, China's main benchmark index, gained 2.6% after China's central bank took steps to cool off a rally in the yuan, encouraging foreign money to come into China. Additionally, China's Golden Week holiday in the first week of October showed a surge in spending. 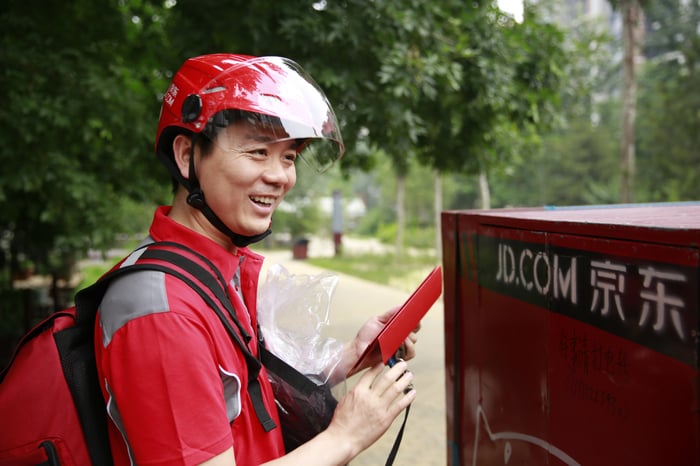 E-commerce stocks were in the spotlight again today as Amazon prepared to begin its two-day shopping holiday, Prime Day, tomorrow. Analysts again predict a wave of spending on the platform and on those similar e-commerce sites of competitors who are also offering discounts. Shares of Amazon surged today on hopes for a strong Prime Day, which carried other e-commerce stocks higher, including Jumia Technologies, an African e-commerce stock that rose double digits. A number of JD's Chinese e-commerce peers, including Baozun and Pinduoduo, were up more than 5%, while Alibaba had gained nearly 3%.

In addition, investors seemed to be responding favorably to election polls showing Biden with a widening lead. A clear victory by him would help eliminate any risk over a disputed election, and a Democratic victory in the Senate and the White House would likely pave the way to a generous stimulus package early next year, giving the stock market more fuel.

Like other e-commerce stocks, JD.com has emerged as a winner this year as the company has delivered strong results during the pandemic in China and seen rapid growth in areas like groceries, telehealth, and pharmacy delivery. As China's biggest direct online retailer and one with a formidable logistics operation, JD has a future that continues to look bright.