The plant-based meat company continues to strengthen its presence around the world despite the pandemic.

It's tough to ignore the fact that healthy lifestyles are very much in vogue these days. This movement started a couple of years ago but the recent COVID-19 pandemic has accelerated this trend as more people seek to boost their immunity as the coronavirus rages around the globe.

Beyond Meat (BYND -3.96%) has capitalized on this increased focus on healthy eating by introducing plant-based meat products such as meatless hamburger patties and meatballs. The company is a major disruptor to the $1.4 trillion global meat industry and has rolled out its products to 112,000 outlets worldwide.

Beyond Meat's share price has more than doubled since the start of the year and recently hit its 52-week high of $195. Does the plant-based meat company still qualify as a buy? 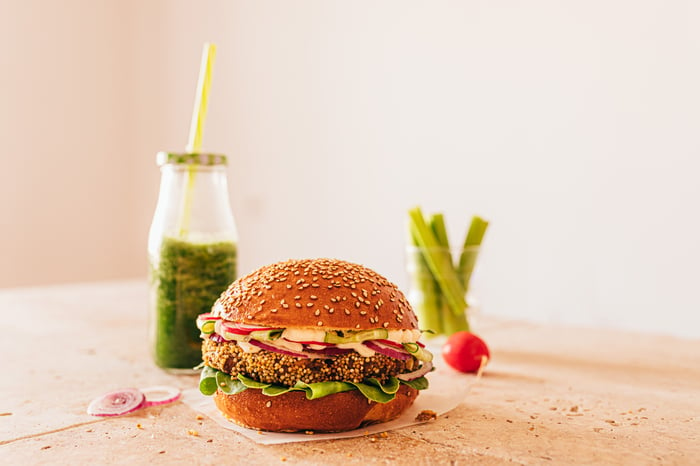 The company has chalked up impressive revenue growth over the last four years. Revenue surged 18-fold from just $16.2 million in fiscal year 2016 to $297.8 million in fiscal year 2019, for a compound annual growth rate (CAGR) of 164%. This growth is underpinned by an innovation strategy that is led by a team of experienced scientists, chefs, and engineers, all working together to ensure the company's products deliver optimal nutrition and taste. Beyond Meat spends almost 7% of its revenue on research and development, well above food and beverage peers that spend less than 2%.

For its latest quarter ended June 27, Beyond Meat posted revenue growth of 68.5% year over year. Its retail segment's revenue for the U.S. nearly tripled year over year to $90 million, though this was offset by a 61% year-over-year fall in revenue for the foodservice segment. The pandemic temporarily shut down numerous food outlets in the U.S. and around the world, forcing the company to pivot to selling more through retail channels by repacking and rerouting their inventory.

Adjusted gross margin improved to 34.9% during the quarter compared to 33.8% in the prior year after excluding costs relating to product repacking activities, demonstrating that the brand continues to have strong pricing power.

Beyond Meat is in the right place at the right time. The plant-based food industry's growth is just getting started, and the company is well positioned to be at the forefront of a multi-year growth trend that could see its revenue growing for many more years. A recent industry report by Meticulous Research estimates that the industry is poised to grow at a CAGR of 11.9% from 2020 to 2027 to reach $74.2 billion, which implies that the market size is already around $34 billion currently.

Beyond Meat's 2019 revenue is a mere 1% of this total addressable market, signaling that the company has significant potential to increase its revenue alongside other competitors such as Impossible Foods. The company has also been accelerating its market share gains, which has expanded 8.5% year over year in the last 52 weeks. Total brand awareness has more than doubled from 23% at its IPO in May 2019 to 52% as of July 2020.

These numbers point to increased brand recognition and loyalty, which will certainly flow through to higher sales and profits in the future.

The company isn't resting on its laurels, though. It has been busy in the last few months with business development efforts. August saw the launch of a new e-commerce website, called "Shop Beyond," which allows U.S. customers to order and receive the company's products delivered to their doorsteps within two days.

In early September, it signed an agreement with the Jiaxing Economic & Technological Development Zone in China to design and build a manufacturing facility for plant-based meat products to be distributed to Shanghai and the rest of the country. Full-scale production is expected to commence in early 2021.

Beyond Meat has also greatly increased its distribution through its longtime partner Walmart, with its products available in 2,400 stores nationwide, up from just 800 locations. CEO Ethan Brown also mentioned on the company's latest earnings call that the company has expanded into club stores such as Sam's Club and BJ's Wholesale Club. At the same time, it's also rolling out new products to complement the increase in distribution channels. Beyond Meat is set to introduce its fourth new product this year, called Beyond Breakfast Sausage Links, which seeks to replace pork sausages as a breakfast staple.

The market opportunity for plant-based products, as well as the above numerous growth catalysts, show that Beyond Meat still has a long runway for growth and that this stock should continue to feature prominently on investors' buy lists.