The latest plant-based offering aims at a healthier start to the day.

Plant-based meat maker Beyond Meat (BYND -0.14%) continues to make headlines as it launches its fourth major product for the year, Beyond Breakfast Sausage Links. Designed as an alternative to the pork sausages that have been a breakfast standby for ages, the pea and potato protein products feature a recipe calculated to "deliver the same taste and texture as pork-based links," according to a company announcement Thursday.

The company's product release schedule appears to be accelerating moving into autumn. The previous rollout, Beyond Meatballs, was announced slightly less than a month ago on Sept. 14, providing a mostly supper-targeted food product.  Beyond's last breakfast release, Beyond Breakfast Sausage Patties, appeared in March, and a recent initiative doubled the product's retail footprint. 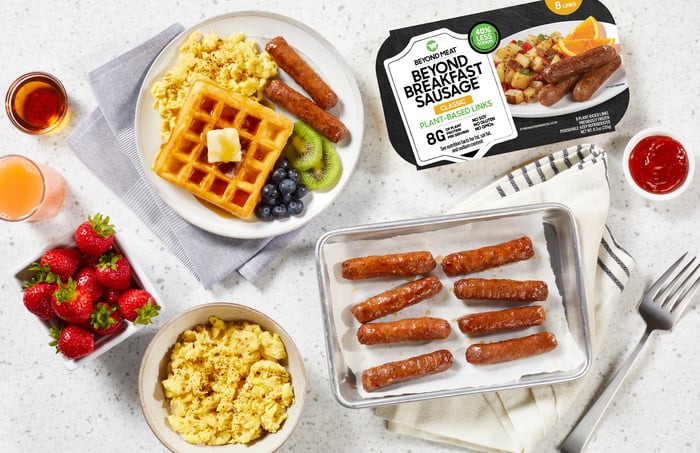 Beyond Breakfast Links will appear in the meat department, not in the frozen vegetables section, at a range of different supermarket chains during October. According to a study by the Plant Based Foods Association (PBFA), faux meats displayed in the meat aisle generate 23% higher sales than those displayed elsewhere in the grocery store, as reported by Plant Based News. Some of the grocery stores stocking the new sausages are regional, but others are nationwide chains such as Kroger.

Beyond Chief Marketing Officer Stuart Kronauge's statement that "our fans will be excited that they can make restaurant-style breakfast an at-home staple with our new links" meshes with COVID-19 related eating trends. According to research by Acosta reported by Supermarket News, 44% of Americans were eating breakfast at home in September, a 33% increase from pre-coronavirus levels.