Please ensure Javascript is enabled for purposes of website accessibility
Log In Help Join The Motley Fool
Free Article Join Over 1 Million Premium Members And Get More In-Depth Stock Guidance and Research
By Jeremy Bowman – Updated Oct 15, 2020 at 10:57AM

Southeast Asia could be Amazon's next big expansion play.

The tech giant brought its usual smorgasbord of benefits to the city-state, promising free two- to three-day delivery on a broad assortment of local products for all customers with an order minimum, free one-day delivery for Prime members, free two-hour delivery on groceries and household essentials, and access to Prime Video. Amazon priced its Prime subscription in Singapore at just a little more than $2/month, aiming to grab market share.

Amazon doesn't break down results by local market, but a new report by ValueChampion shows Amazon is fast gaining on the local e-commerce leaders.

ValueChampion found that Amazon beat both Sea and Lazada on price in a basket of 73 items. Amazon was 4.6% cheaper than the average price, while Shopee's prices were nearly average and Lazada was 16% more expensive on average. Of the four e-commerce companies that the research firm looked at, Qoo10, a local e-commerce marketplace, was actually the cheapest of the bunch with prices that were 11% lower on average. 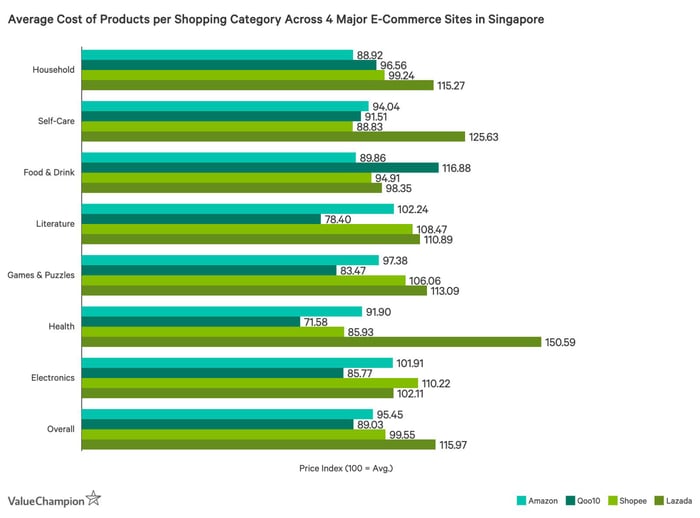 As the chart above shows, Amazon offers the lowest prices of the group in high-frequency categories like household products and food and drink, helping to attract Prime subscribers. It's a typical strategy for Amazon, which tends to sell popular goods near cost, and price "long tail," harder-to-find products for higher margins.

Since its launch last year, Amazon also appears to be quickly grabbing market share. Though it still trails the other three companies, Amazon saw its web traffic climb 61% since March 2020 to about 5 million visits per month. The good news for Sea investors is that Shopee experienced a similar boom, lifting it past Lazada into the top spot. 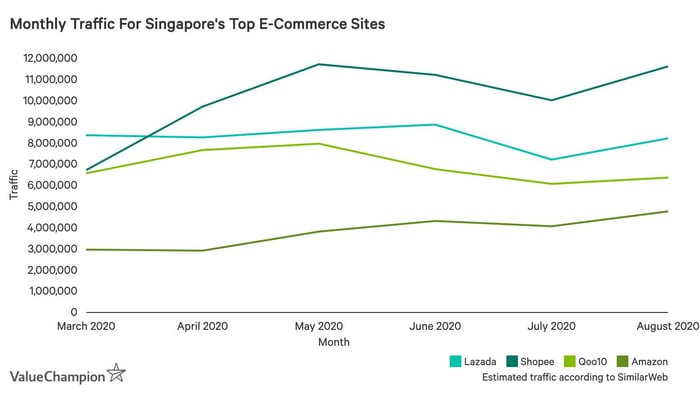 With its Prime Day bonanza this week, its first in Singapore, Amazon has yet another opportunity to capture market share in Singapore, offering flash deals on electronics, toys, home goods, and more to incentivize shoppers to sign up for the membership program.

Should Sea investors be worried?

Sea Limited has been a breakout winner this year, as the stock has more than quadrupled on booming growth driven by the pandemic in its digital gaming and e-commerce division. However, that doesn't make the company invulnerable to new competition, and Amazon is among the most aggressive in fighting for market share.

It's worth remembering that Singapore is a small market with a population of less than 6 million. Sea's biggest markets are larger countries in Southeast Asia , like Indonesia and the Philippines, which can be difficult to serve as an online retailer since they are island nations.

However, Amazon likely sees Singapore as a beachhead from which to expand further into the densely populated region. Last year, the company held talks with Gojek, an Indonesian ride-hailing start-up, about a potential investment or partnership, but nothing ever came of those discussions. Still, an acquisition in the region, like it did with Souq.com in the Middle East, remains a possibility and would accelerate Amazon's ambitions in Southeast Asia.

While Amazon dominates U.S. e-commerce with nearly 50% market share and is the clear leader in Western Europe, the company doesn't always get its way when it ventures abroad. Last year, Amazon shut down its e-commerce marketplace in China, essentially waving the white flag in the world's biggest e-commerce market, as the company could not make headway against entrenched local competitors like Alibaba and JD.com.

In Latin America, Amazon has been focused on expansion, building out warehouses across the region, and it launched Prime last year in Brazil. However, Amazon's push into Latin America's biggest economy hasn't disrupted local leader MercadoLibre (MELI -3.18%), which has continued to see booming sales growth in Brazil and much of the region. MercadoLibre stock has more than doubled this year, and revenue jumped 61% in its most recent quarter. MercadoLibre has invested in its own logistics and payments infrastructure to strengthen its defense against Amazon, and those investments appear to be paying off, especially in payments where total payment volume rose 142% on a currency-neutral basis last quarter.

The lesson for Sea investors then may be that, while Amazon deserves a watchful eye, it's not a mortal threat to the Shopee owner. It's also worth remembering that a majority of Sea's sales come from its Garena digital gaming platform, which would not be disrupted by Amazon. Still, Amazon is known to play the long game, and Sea investors should be mindful of the risk from the e-commerce giant. If Amazon launches Prime in nearby countries like Indonesia and the Philippines, that may be a sign that it sees serious potential in Southeast Asia.

John Mackey, CEO of Whole Foods Market, an Amazon subsidiary, is a member of The Motley Fool's board of directors. Jeremy Bowman owns shares of Amazon, JD.com, MercadoLibre, and Sea Limited. The Motley Fool owns shares of and recommends Alibaba Group Holding Ltd., Amazon, JD.com, MercadoLibre, and Sea Limited and recommends the following options: short January 2022 $1940 calls on Amazon and long January 2022 $1920 calls on Amazon. The Motley Fool has a disclosure policy.