The Dow Jones Industrial Average (^DJI -1.03%) was down about 0.5% at 2:55 p.m. EDT on Wednesday as uncertainty surrounding additional pandemic-related stimulus persisted. A quick deal for more aid looks unlikely after Treasury Secretary Steven Mnuchin said that reaching an agreement before the election would be difficult.

Shares of Apple (AAPL -2.54%) fell along with the Dow on Wednesday, one day after the tech giant unveiled its new lineup of iPhones. Meanwhile, Goldman Sachs (GS -2.32%) stock was up slightly after the company reported blockbuster results. 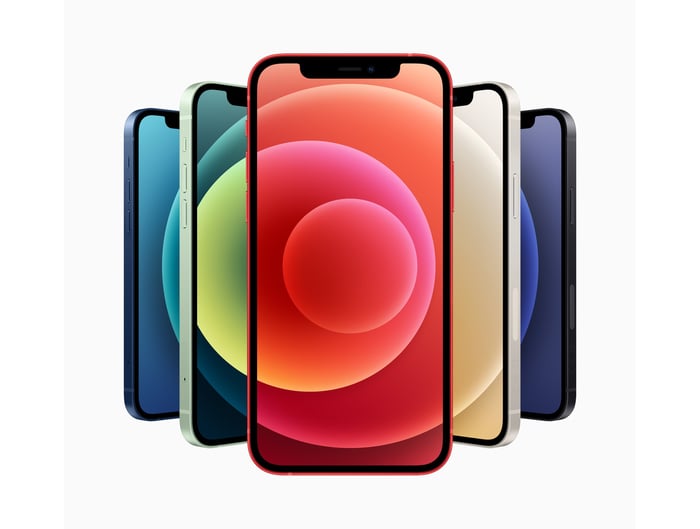 Apple delivered largely what was expected during an event on Tuesday. The tech giant unveiled its slate of 2020 iPhones, comprised of four models featuring 5G cellular technology. The iPhone 12 mini is the smallest and cheapest, starting at $699. The larger iPhone 12 will go for $799, while the premium iPhone 12 Pro and iPhone 12 Pro Max will sell for $999 and $1,099, respectively.

Apple raised prices in a few different ways with this new collection of iPhones. First, the base iPhone 11 was priced at $699 last year, $100 less than the standard iPhone 12 this year. Second, the iPhone 12 and iPhone 12 mini will cost an extra $30 if not bought through either AT&T or Verizon, although other carriers will likely offer various deals and trade-in offers. And third, Apple will no longer include headphones or a charger with its iPhones.

Of course, the state of the economy is the big wild card. With persistently elevated unemployment, no new economic stimulus in sight, and signs of a winter wave of the coronavirus in the United States, there's a lot of uncertainty for Apple. Add in the question of how much consumers really care about 5G, and you have a wide range of scenarios that could play out over the next few months.

Apple stock didn't get any kind of boost on Wednesday from the iPhone event, and was down about 0.2% by late afternoon. Shares are still up over 60% so far this year.

Goldman Sachs beat analyst expectations for third-quarter revenue and profit by a mile. Revenue of $10.78 billion was $1.38 billion higher than analysts were expecting, while earnings per share of $9.68 topped estimates by $4.24.

The global markets segment was the star performer, with revenue of $4.55 billion, up 29% year over year. Revenue from fixed income jumped 49% to $2.50 billion, while revenue from equities rose 10% to $2.05 billion. The asset management segment also showed strong growth, with revenue up 71% to $2.77 billion.

Goldman recorded a provision for credit losses of just $278 million for the third quarter, down from $1.59 billion for the second quarter. The company was able to set aside less for expected future losses due to paydowns on corporate lines of credit and consumer installment loans.

While it was all good news in Goldman's report, the stock was up just 0.2% by late Wednesday afternoon.