Investors looking at real estate investment trusts (REITs) will likely run across "The Monthly Dividend Company," which is the nickname that Realty Income (NYSE:O) has given itself. To be fair, the net lease REIT has a great history behind it that could justify the nickname and there's no reason to expect the future to be any less impressive than the past. But does that make it worth buying right now?

Realty Income has increased its dividend every year for more than a quarter of a century. The average annualized increase over the past decade was roughly 5% a year, which outpaces the historical growth rate of inflation. Meanwhile, that dividend is paid monthly, as the REIT's chosen moniker suggests. For a retiree, buying Realty Income is kind of like replacing a paycheck. 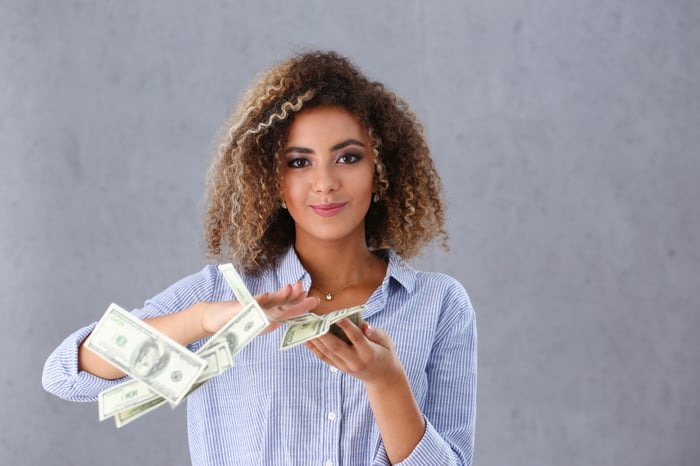 A key piece of the model here is the net lease structure that this REIT operates under, in which Realty Income owns a property but the lessee is responsible for most of the asset's operating costs. It's a fairly low-risk approach to real estate. Moreover, Realty Income likes to focus on owning properties that are vital to the success of its tenants. For example, in the retail space, which is where the REIT is focused, it looks to own stores that are highly productive and well located. Basically, the locations that a retailer would want to keep open even in the face of adversity.

The success that Realty Income is having today underscores its discipline. Although rent collection rates fell to 82% in May during the worst of the COVID-19 downturn in early 2020, they were back up to nearly 94% by September. Clearly 100% would be better, but even in the best of times, REITs don't always collect all of their rent. Put simply, Realty Income is doing very well today despite material market headwinds. And, in a show of strength, it has continued to increase its dividend.

So Realty Income's business remains rock solid, which is great news for current shareholders. However, what about income-focused investors looking to get in on that monthly dividend? That's a tougher question to answer since a great company can be a bad investment if you pay too much for it.

Using dividend yield as a rough gauge for valuation doesn't paint a compelling picture. Yes, Realty Income's current 4.4% yield is well above the roughly 3.6% yield it was at before the COVID-19 crisis hit. But that 4.4% still sits near the lowest levels in the company's history. Even focusing on just the last decade, the current yield is kind of middle of the range, suggesting that investors willing to wait could probably get a better deal here. The yield has been north of 5% four times in the past 10 years. 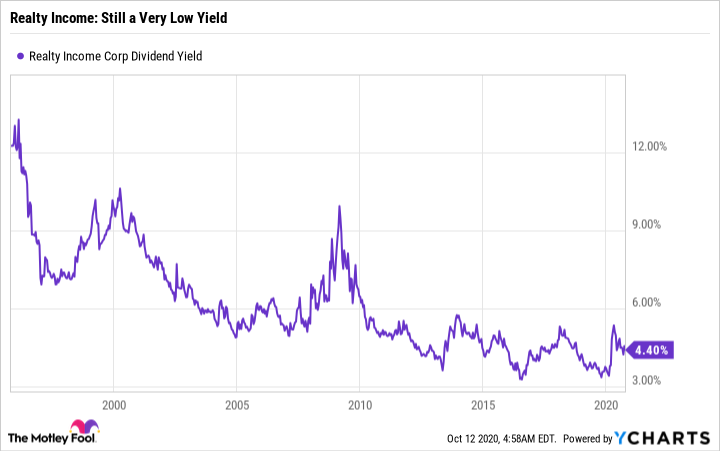 At this point, Realty Income isn't providing adjusted funds from operations (AFFO) guidance for 2020, which is like earnings for an industrial company. That's not unreasonable given the pandemic. However, if you use the second-quarter AFFO as a run rate, Realty Income's shares are trading at a multiple of roughly 18 times AFFO. Note that this is after the stock is down more than 20% from its early-year highs. So, in some respects, it is cheaper than it was, but an 18 times AFFO multiple is really in growth stock territory, and not what you'd expect from a slow and steady dividend payer. Realty Income is no bargain today.

It would be hard to suggest that investors who purchase Realty Income are buying a bad company, given its incredible history and strong performance in the face of material headwinds. However, the value proposition isn't great.

At best the REIT looks fully valued, but it's probably a bit on the expensive side. To be fair, investors have long afforded Realty Income a premium price, but for value-conscious types, now doesn't look like a particularly good time to step aboard. If you are willing to pay up for quality, though, you might be tempted to buy today. Just go in knowing that even with the stock off its highs, the price you are paying is still pretty dear.