The international expansion is underway -- sort of.

Chinese electric-vehicle maker Kandi Technologies (KNDI -0.30%) got off to an inauspicious start in August, when its "live virtual launch" of two new electric car models (the K23 and K27) netted the company only 11,000 registrations to view the event online -- and just 436 pre-orders. Now, however, Kandi is taking a second stab at invading the U.S. market for electric cars, announcing "nationwide distribution" in the U.S. from physical car stores.

Investors are betting that things will work out a bit better for Kandi this time around, and as of 12:20 p.m. EDT, the stock is up 7.5%. 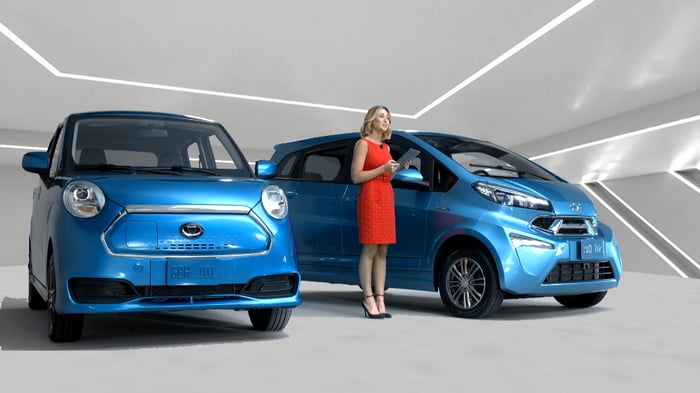 Would you buy a Kandi car based on just this picture? Image source: Kandi Technologies.

According to Kandi, its "initial rollout" will feature "market-exclusive agreements to a maximum of three dealer partners in the Dallas/Fort Worth Metroplex." But right off the bat, this sounds like something less than even a Texaswide rollout, much less a nationwide one.

And Kandi may be starting out even smaller than that. The company says it will be selling cars through an "innovative micro hub showroom" just 2,000 square feet in size. Each of the showrooms will include "two interactive kiosks" -- which should just about fit in the space allowed -- but keep its inventory "housed off-site."

On the one hand, Kandi's minimalist approach to showrooms sounds like it will minimize start-up costs for folks who want to join its dealer network, which should make it easier to find distribution partners quickly. On the other hand, though, we saw in August that virtual selling didn't work particularly well to interest car buyers in Kandi's largely unknown product. I'm not sure that doubling down on that sales strategy, by selling primarily via lobby kiosks in bricks-and-mortar locales, is going to work much better.

Investors who are buying Kandi stock based on today's corporate PR may be failing to learn the correct lessons from history -- and may end up regretting that they didn't study harder.