Imagine your boss marches over to your desk and informs you that your paychecks will go down by over $450 a month for as long as you're employed. You'd probably get stressed out and annoyed.

It turns out that you may be in line for that sort of pay cut as a senior if you file for Social Security at the wrong time.

Can you afford a major hit to your Social Security benefits?

Your Social Security benefits are calculated based on your average monthly wage, adjusted for inflation, during your 35 highest-paid years in the workforce. From there, you can claim your full monthly benefit once you reach full retirement age, or FRA. 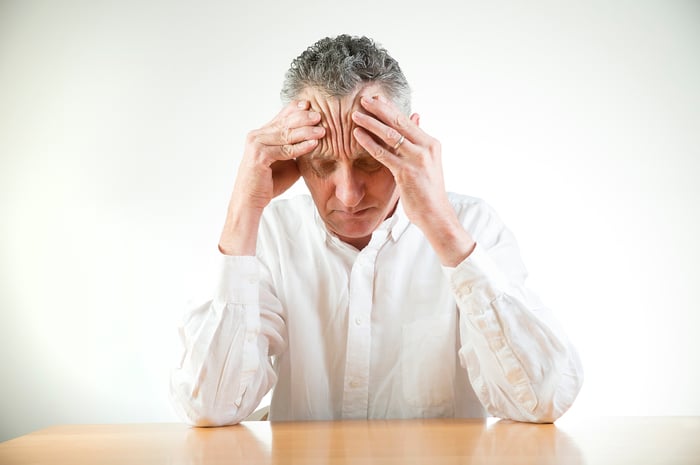 FRA is based on your year of birth. If you were born in 1960 or later, you're looking at an FRA of 67, but you're allowed to file for Social Security as early as age 62.

The upside of claiming benefits at 62 is clear: You get your money as soon as possible without risking that you'll get less from Social Security in your lifetime if you pass away at a relatively young age. Yet the downside of filing at 62 is pretty severe. You'll reduce your monthly benefit by 30% with an FRA of 67, and that reduction will remain in effect for the rest of your life.

The average senior on Social Security today collects a monthly benefit of $1,519. If we reduce that benefit by 30%, we end up with $1,063. If you file at 62 instead of waiting until 67, you could wind up with $456 less income on a monthly basis, or $5,472 less on a yearly basis. That's a hit you probably can't afford to take, especially if you're nearing your senior years with little money in your 401(k) or IRA.

What would a $456 monthly pay cut mean for your retirement?

Losing out on $456 a month could constitute a major hit to your finances. The result? You might need to downsize your living space, relocate somewhere with a more affordable cost of living, or reduce entertainment expenses.

If a $456 pay cut would devastate you at present, it will really hurt you during retirement. Don't let that happen. Instead, wait until at least FRA to sign up for Social Security, unless there's a truly compelling reason to claim benefits sooner (for example, if you've lost your job and really can't swing your bills without taking benefits).

An even better bet may be to delay your benefits past FRA. For each year you wait, you'll boost your reward by 8%. Instead of suffering a pay cut, you'll instead orchestrate your very own pay raise when you need it most.