These two healthcare giants have a habit of beating the market, and they aren't about to stop.

Despite the challenges the market has faced due to the COVID-19 pandemic, there have been several high-profile IPOs recently. Arguably the most anticipated of the bunch was Snowflake, a cloud-based data warehousing company. Snowflake has already made a name for itself -- as of July 31, the company boasted 3,117 customers, including 146 of the Fortune 500 companies. Snowflake was even able to attract an investment of more than $500 million from Warren Buffett's Berkshire Hathaway.

Despite Snowflake's seemingly bright future, it might be worth looking at better-established growth stocks (companies that grow their revenue or earnings at a rate faster than their industry averages) that are already profitable and whose prospects also seem enticing. Two companies I think fit the bill are Veeva Systems (VEEV -4.38%) and Vertex Pharmaceuticals (VRTX -1.17%). Here is why both of these healthcare stocks are worth adding to your portfolio over Snowflake. 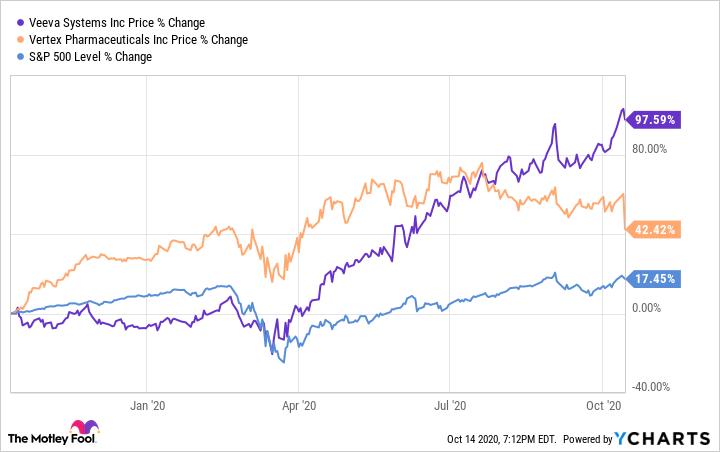 Veeva Systems provides cloud-based customer relationship management (CRM) solutions to companies in the life sciences industry. Its products include Veeva Vault, a content management platform that enables drugmakers to ensure regulatory compliance in many business activities. The company makes the bulk of its revenue via subscription services. Veeva Systems explains the benefits of its products as follows:

Our solutions are designed to help life sciences companies develop and bring products to market faster and more efficiently, market and sell more effectively, and maintain compliance with government regulations.

These perks have helped Veeva attract many big-name clients, including AstraZeneca, Biogen, Eli Lilly, and Merck, among many others. Veeva Systems continues to report strong financial results, too. During its latest reported quarter, second quarter of its fiscal year 2021 that ended on July 31, the company's revenue came in at $353.7 million, a 33% year-over-year increase. Veeva Systems' net income for the quarter jumped by 18% to $93.6 million. This isn't a one-off; Veeva Systems' revenue consistently grows at a good clip.

However, Veeva Systems still has a long runway for growth. The company estimated its addressable market to be worth $7 billion annually, and the company continues to add new clients. Veeva Systems' retention rates for its subscription services during its fiscal years 2018, 2019, and 2020, its retention rate was 121%, 122%, and 121%, respectively.

The company is also adding more product offerings and branching out beyond the life sciences industry. With an attractive addressable market, the ability to continuously add new customers, and a growing suite of services, Veeva Systems has a very bright future ahead. 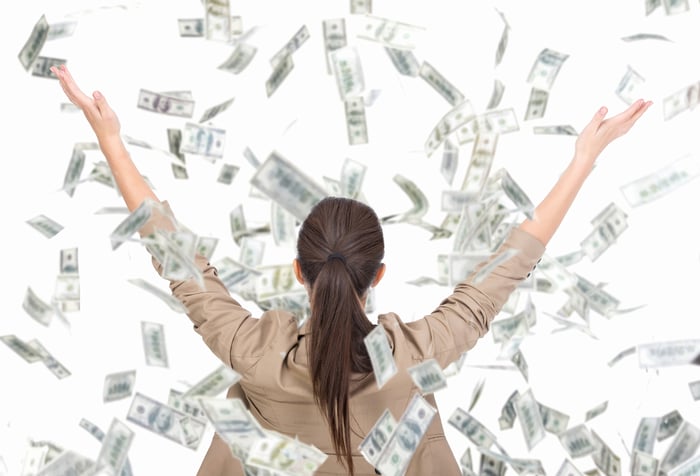 Vertex Pharmaceuticals benefits from a great competitive advantage. The company holds a monopoly in the market for drugs that treat cystic fibrosis (CF), a rare condition that affects internal organs such as the lungs. Roughly 75,000 patients suffer from this condition in North America, Europe, and Australia. Vertex Pharma's crown jewel is Trikafta, a medicine that can treat 90% of patients with CF, whereas its previous drugs only addressed a smaller proportion of this market.

Trikafta earned regulatory approval in October 2019, and it has already made a major impact on Vertex's financial results. During its second quarter ending on June 30, the company's revenue came in at $1.52 billion, a 62% increase compared to the prior-year quarter. Sales of Trikafta were $918 million. Much like Veeva Systems, Vertex is in the habit of growing its revenue rapidly, as this table shows.

Vertex's top-line growth rates during its most recent quarters are unsustainable, and the company's year-over-year revenue growth will likely slow in the coming quarters. However, the biotech's revenue is projected to increase at an average of about 25% per year for the next five years. Note that Vertex has other products in its pipeline, including several experimental drugs to treat the remaining population of patients in the CF market.

The healthcare company is also going after difficult targets such as sickle-cell disease (SCD), a rare blood condition with few therapy options. Vertex partnered up with CRISPR Therapeutics to develop an SCD treatment called CTX001. This experimental therapy has already produced positive results. While there's still a long road ahead, CTX001 could end up becoming a major growth driver if approved.

It is worth noting that Vertex's stock recently plunged after the company announced it would discontinue the development of VX-814, a potential treatment for alpha-1 antitrypsin deficiency (AATD). Despite this setback, Vertex is developing another medicine for AATD called VX-864, which, according to the company, "is structurally distinct from VX-814." The biotech expects data from a phase 2 clinical trial for VX-864 in the first half of 2021. Vertex has several other promising candidates in its pipeline. I think this recent sell-off presents an opportunity for investors to scoop up its shares at a discount.

Thanks to its dominance in the CF market and its other opportunities, Vertex is well-positioned to continue beating the market while rewarding its shareholders in the process.