Many companies offer both choices -- but the decision can be complicated.

If you've ever read your company's retirement plan document, it's likely you've come across a variety of retirement account options. The real question, however, is if you've taken the time to truly understand the implications of funding these different accounts.

The most well-known employer-sponsored retirement account is simply tabbed a "401(k)," but there are major differences between a pre-tax, or traditional 401(k), and a Roth 401(k) -- both of which are likely offered at your company. A Roth account -- whether it's a 401(k) or IRA -- contains after-tax money and offers tax-free growth. The aim of this article is not to necessarily drive you to invest in one or the other, but to provide a foundation to make best funding decision given your personal circumstances.

The most common 401(k) is traditional. Money contributed into this sort of account is taken pre-tax from your gross earnings. The result is that you make your retirement contribution before tax is charged, which leads to a lower tax bill today. The theory here is that by reducing tax today when your tax rate is likely medium-to-high (while you're employed), you'll probably pay less tax when you actually draw from the account in retirement, when your tax rate may be lower.

The main advantage of a traditional 401(k) is that you are actively saving tax dollars today by contributing to these accounts. But it's key to remember that you will still eventually pay tax on this money. The truth is that these accounts are best described as "tax-deferred," and reflect the belief that your tax rate will be lower in the future than it is now.

A traditional 401(k) also will likely make sense for high earners, or those in the 24% tax bracket and higher, as it's generally less likely you'll be paying the same tax rate when you're retired -- although with limited knowledge about how tax laws may change in the future, it's really impossible to know how much you'll end up paying later when money is withdrawn. 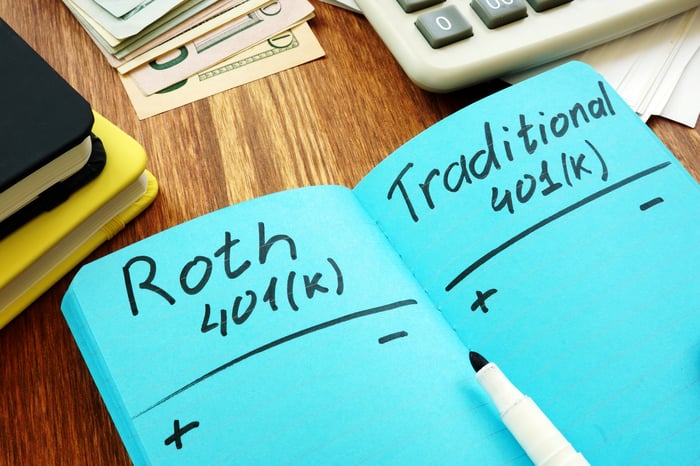 When most people think of a 401(k), they generally aren't thinking of the after-tax option, but it's good to know what such a choice would entail. If your company offers a Roth option and you choose it, your retirement contributions will be taken from your net earnings. In other words, tax will be charged on your gross earnings, Roth contributions will be taken out after-tax, and funds will grow tax-free as long as they remain in the account.

Roth accounts, broadly speaking, will benefit those who expect their tax rate to be higher in retirement. If you have substantial assets or an active side hustle that you might maintain through retirement, it's possible that your tax rate may be higher in retirement than it was when you were employed. We are currently in a low-tax environment, and there are already plans for the current tax discounts to sunset in 2025 -- this gives a not-so-subtle hint that it could be an advantageous time to pay tax now and fund Roth accounts before rates increase in the future.

The Roth also offers a clear psychological benefit: Once you've paid tax on earned income and have deposited it to your Roth 401(k), you'll never pay tax on that money or any of its growth and earnings forever, even after your death. There is something inherently pleasing about knowing all of the money in your retirement account is actually yours, which is something you can't say about a traditional 401(k) due to its embedded tax liability.

Many companies allow you to split contributions between traditional 401(k)s and Roth 401(k)s, keeping you partially covered regardless of future tax rates. If you end up having a very low tax rate in retirement, you'll be glad you chose a traditional 401(k), and your Roth 401(k) will remain tax-free. If you end up with an astronomically high rate of tax in retirement, you'll benefit from having paid tax previously on your Roth money.

I will venture to guess that for most people, a traditional 401(k) is a perfectly fine and sensible choice. Most people do pay less tax in retirement given they are no longer earning a formal income. But lest we forget: It's far from a guarantee, as tax rates have the potential to rise substantially in the next several decades, and people are increasingly finding ways to generate independent income in retirement. Covering all of your bases is a prudent step in managing your financial life, so contributing to both types of accounts should also be considered.