The company has doubled its R&D spend and is researching a "crackable egg."

Impossible Foods, the privately held chief rival to plant-based meat manufacturer Beyond Meat (BYND 14.33%), said on Tuesday it's working on developing plant-based milk for its animal-free product lineup. According to press conference statements quoted by Engadget, the company's Impossible Milk has culinary properties close to or identical with cow's milk, rather than simply being a standard nut or soy milk.

Among the milk-like characteristics Impossible Milk is said to duplicate, it is doesn't curdle in hot liquids such as coffee, tea, or cocoa; can be frothed for cappuccino-making and other purposes; and has a creamy texture similar to the genuine, animal-sourced substance. In a statement quoted by The Washington Post, CEO Pat Brown said the "plant-based milks out there are inadequate" and that the company's research is aiming "to make something that for a dairy milk lover is better than anything that comes from a cow." 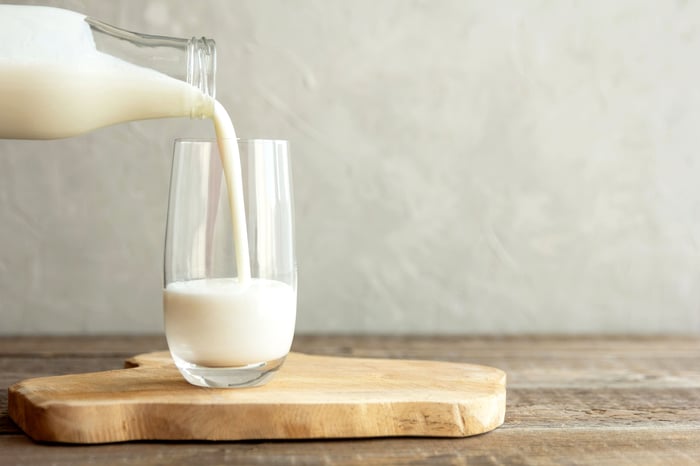 In a comment to The Food Institute, the National Milk Producers Federation senior vice president for communications, Alan Bjerga, said the move "could cause some concerns for people who are currently grinding up almonds, soy, or oats or whatever else they can mix with sugar water and artificial coloring so they can sell it for twice the price of real milk," rather than strongly threatening dairy producers.

Impossible Foods also issued a press release earlier this week declaring it is doubling the size of its research and development department, with the goal of helping "eliminate animal agriculture." According to Engadget, Impossible Foods is also working on the development of a "crackable egg" made out of plant materials, unlike the pourable vegan eggs currently made from flavored canola oil or similar ingredients.

Impossible is one of several companies currently jockeying for market share in the booming plant-based meat market.

More Likely to 5x First: Beyond Meat or Coupang
401%