This sweet stock is a sassy disrupter.

I'm pretty picky when it comes to adding a new stock to my portfolio. Most of the time I'd rather add to an existing position that I know well than take a chance on something less familiar. But as I was researching recent IPO stocks, I couldn't help but get excited about Lemonade (LMND 12.75%).

This tech-centric insurance provider is disrupting its industry and has all the makings of a multi-bagger for patient investors. Here are five reasons why I became a shareholder.

1. It has a new approach to an old-school industry

Co-founders Daniel Schreiber and Shai Wininger set about to build a company from the ground up utilizing technology to make "insurance more delightful, more affordable, more precise, and more socially impactful." Artificial intelligence chatbots make it easy to get a quote and sign up for coverage. A robust mobile app makes it easy to file claims. Data science and machine learning enable instant claim payments. Lastly, after it takes its flat 25% cut of premiums and pays out claims, it donates any money left over to non-profits chosen by its policyholders.

This tech-based and "un-conflicted" business approach has captured over 814,000 customers and is putting the company on track to post at least $86 million in revenue in 2020, with a current roster of only 381 employees.

2. It's growing fast in a massive market

The market is huge. In the company's filing to go public (S-1), it states that there's over $5 trillion paid annually in premiums for property, life, and casualty insurance globally. Lemonade is focused on three products in the U.S. and Europe: Homeowners, renters, and pet insurance. Even with approval to sell homeowner policies in fewer than half of the states in the U.S., it saw a 115% increase in premiums in its most recent quarter to $155 million. As the company expands approval for its products across the U.S. and Europe, it will gain access to even more potential customers. 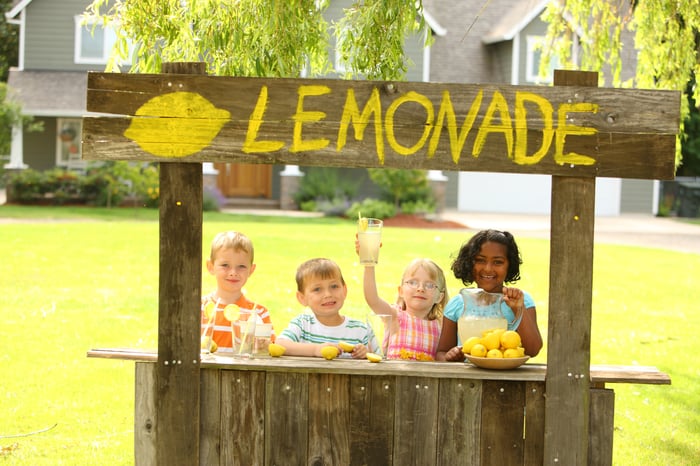 3. It appeals to a new generation of customers

Based on data from its S-1, about 70% of Lemonade's customers are under the age of 35, and 90% stated they haven't owned insurance before. Its tech-forward approach appeals to a young mobile-native consumer. Attracting this next generation of customers enables it to benefit from the natural life cycle as they earn more money, start a family, buy a house, and maybe even own a pet.

These milestones correspond with an increased need for insurance, setting the company up to make more money over time from its young customers. This is already happening as demonstrated by the company's 17% year-over-year increase in annual premiums per customer to $190 in its most recent quarter.

4. Its business model is disruptively cost-effective

Lemonade is built on what it calls a "digital substrate," meaning it strives to make repeatable work tasks something that its algorithm or AI chatbot can handle versus a human. Over time, its AI has been getting more capable. In 2018, the artificial intelligence engine only handled 6% of the customer queries. In its most recent quarter, the AI was able to handle a third of all policyholder queries, significantly reducing the number of customer service agents needed to handle routine requests.

Additionally, its business model doesn't require insurance agents who get a cut of your premiums when you buy a policy. This takes cost out of the process that gets passed on as savings to customers. To get a feel for its leverage, it shares on its website that it has one employee for every 2,353 policies versus State Farm's ratio of one employee for every 1,095 policies. That means that the traditional insurer has to hire twice as many people to serve the same number of customers.

5. It has an experienced leadership team

Co-founder Daniel Schreiber has served as CEO and Chairman since the company was founded. His 17 years as a technology executive with a legal background and a former software company co-founder give him a tremendous set of experiences to bring to this young start-up. His leadership has earned a 99% approval rating on Glassdoor.

Co-founder Shai Wininger is the Chief Operating Officer. His 20-plus years in the high-tech industry before Lemonade include executive positions in aerospace software, mobile apps, virtual reality, and being the founder of Fiverr, a freelancer platform. This experience gives him a great perspective to manage a disruptive technology team.

Chief Insurance Officer John Peters joined the company in 2016. His background includes being Chief Underwriting and Product Officer at Liberty Mutual, and a decade at the well-respected consulting firm McKinsey in its property-casualty insurance practice.

This sweet opportunity comes with a caveat

I've made Lemonade a 2% position in my portfolio, but this purchase isn't without risk. The stock carries a lofty software-as-a-service-like valuation of a 33 price-to-sales ratio, it's losing money as it invests its profits in growth, and it only has one quarter under its belt as a public company.

All of this could result in a bumpy ride for the share price. For me, the track record of growth, its disruptive business model in a massive market, and the seasoned management team are worth making a long-term bet on this growth stock.