In its last earnings update in late July, Starbucks (NASDAQ:SBUX) gave investors several reasons to feel cautious about its short-term growth prospects. Sales might not recover from COVID-19 challenges until mid-2021, it warned, with a full profit rebound likely even further out.

Industry growth trends have improved since that update in late July, though, with peer McDonald's (NYSE:MCD) recently reporting that it broke back into positive sales trends by late September. We'll find out on Thursday, Oct. 29, whether Starbucks is on a similarly strong trajectory as it closes out 2020 and looks ahead to its new fiscal year. 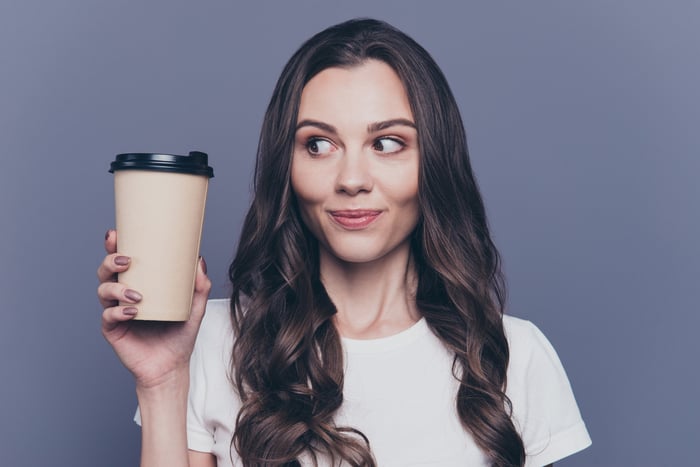 Starbucks' last official update predicted that U.S. sales would drop by between 12% and 17% in the quarter that closed in late September. That result would represent a solid rebound as compared with the prior quarter's 40% slump. But there are good reasons to expect a slightly stronger recovery.

McDonald's in early October celebrated a surprise return to sales growth in recent weeks, after all, with comps rising 4.6% in Q3 compared with an 8.7% drop in the prior quarter. Starbucks has a deeper hole to exit, but investors are still more optimistic today than they were back in late July. Wall Street is expecting the chain to announce revenue declines of about 11% for fiscal Q4, with Starbucks' outlook calling for a drop of between 10% and 15%.

The pandemic has forced people to dramatically shake up their routines, setting up a risky situation for Starbucks and its peers, who are all fighting to reestablish their market positions as economies restart. The shift has been especially hard on the breakfast hours that make up so much of the business for Starbucks, McDonald's, and Dunkin' Brands (NASDAQ:DNKN).

That's why investors will be watching these reports for signs of changing market-share dynamics. Dunkin', which reports earnings results on the same day as Starbucks, revealed low-single-digit comps declines at the start of the period, and we already know McDonald's returned to growth.

It will also be important to follow Starbucks' advertising and promotions expenses. McDonald's ramped up its own marketing in the quarter, for example, and the coffee titan might have been forced to do the same to protect its industry position.

CEO Kevin Johnson and his team will have the benefit of a few weeks of sales figures when they issue their first official outlook for fiscal 2021. A few months ago, they predicted that sustainable growth rates might recover in the U.S. by the middle of the year, while profit margins trail that result by six months. That outlook implied that it will be roughly a full year from now before investors can expect a return to more normal operating trends.

Improving demand through the summer might convince Starbucks to cut the timing of that rebound on Thursday. But the company will still be factoring in some major risks, including sluggish international economies, continued COVID-19 outbreaks, and a potentially sticky recession in the U.S. restaurant industry.