Apple (AAPL 1.37%) is set to report fiscal fourth-quarter earnings results on Thursday, but investors should temper their expectations. The company will face tough comparisons in several categories, most notably in the core iPhone business. The COVID-19 crisis impacted Apple's supply chain earlier this year and led to delays in final testing, which subsequently pushed back the production schedule by a few weeks.

The iPhone 12 and 12 Pro launched on Friday, slightly later than usual, and after the fiscal fourth quarter had already closed at the end of September. In contrast, last year's iPhone 11 lineup launched in late September. 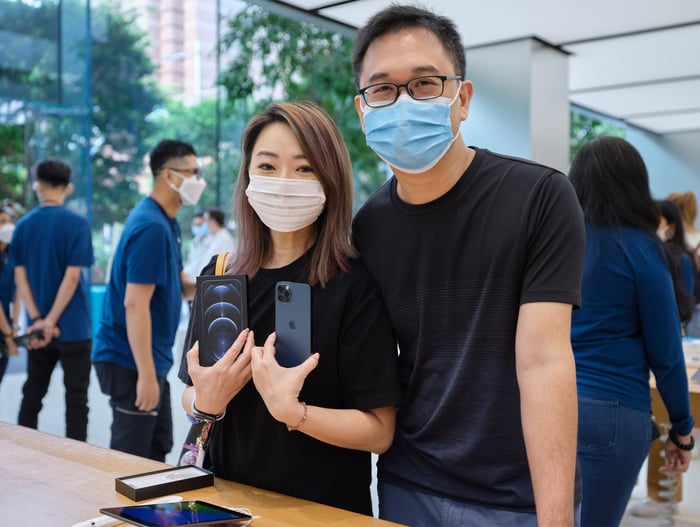 A "lack of new products"

Morgan Stanley analyst Katy Huberty released a note last week warning that analysts' expectations for the iPhone remain too high. The consensus estimate currently calls for 40.4 million iPhone units, which Huberty suggests is too optimistic. The analyst is modeling for iPhone unit volumes of just 33 million and iPhone revenue of $22.9 billion, translating into an average selling price of approximately $694.

"While results ahead of a product cycle don't tend to influence investor sentiment, we see the potential for an expectations miss on the back of aggressive consensus iPhone expectations that don't fully account for the lack of new products in the quarter," Huberty wrote in a research note to investors. Instead of focusing on the iPhone, investors should look at other parts of the business, as well as guidance for the holiday shopping season.

While the Cupertino tech giant did have a virtual product event in September to unveil the Apple Watch Series 6 and iPad Air 4, the latter device didn't ship until October. The smartwatch did launch about a week before the fiscal year ended, so some Apple Watch sales will be included in the upcoming earnings report.

The good news is that Huberty believes that demand for the newest iPhone is the strongest it's been in years, pointing to lead times and shipping estimates. Separately, TF International Securities analyst Ming-Chi Kuo recently noted that pre-order volumes are up and that the product mix appears to be shifting toward higher-end Pro models, which bodes well for overall profitability.

Huberty is modeling for services revenue of $14.5 billion, which would represent both a new quarterly record and 10% sequential growth. The analyst is assigning a much higher valuation multiple to the booming services segment compared to hardware products, due to the highly profitable and recurring nature of services revenue. Apple is looking to hit 600 million paid subscriptions by year-end.

While the timing of the iPhone 12 launch will affect reported results, the more important thing will be how the new flagship smartphone sells in the coming quarters. On that front, Huberty is very bullish and tells investors to buy the stock if it dips after earnings.