Unfortunately, the U.S. economy is officially in a recession. That creates challenges for an investor since no one knows the length or severity. This pandemic-induced recession adds to the uncertainty.

Under these circumstances, these three companies, by providing everyday items, have stable demand for their products even during difficult economic times. 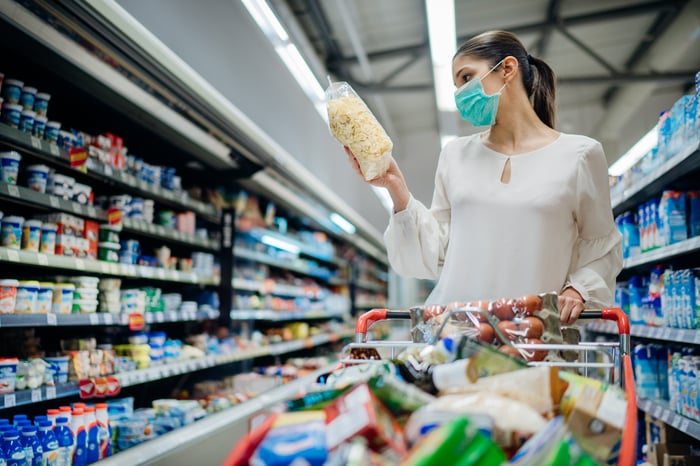 Procter & Gamble (NYSE:PG) has a stable of well-regarded products. These include Head & Shoulders, Gillette, Crest, Luvs, Always, and Bounty. People continue to buy items like shampoo, razors, toothpaste, diapers, deodorant, and paper towels even in a recession.

The proof is in the results, with the company continuing to show solid growth. In Procter & Gamble's first fiscal quarter (ended Sep. 30), adjusted sales grew by 9% compared to the year-ago period. This drove its adjusted earnings per share 22% higher.

As a testament to its steady results and confidence, it has raised its dividend for 64 consecutive years, and provides a 2.2% yield. This makes the company a Dividend King, which is a member of the S&P 500 that has raised its payment for at least 50 years.

General Mills (NYSE:GIS) is a food company that also has a stable of strong products. These include items like Cheerios, Raisin Nut Bran, and Yoplait, that are commonly found in people's homes.

Not only do people keep buying its goods, but they may actually increase their purchases as they eat at home more. Its fiscal first quarter results, which ended on Aug. 3, show that customers still clamor for its merchandise. General Mills' sales grew by 10% compared to last year after stripping out items like foreign exchange translations. Its adjusted earnings were $1.00 a share, 27% above the year-ago figure.

While this is partly attributed to higher demand fueled by stay-at-home orders, CEO Jeff Harmening also noted there were market share gains. This means General Mills continues to strengthen its market position.

General Mills also rewarded shareholders by bumping up its quarterly dividend from $0.49 to $0.51, which it announced when it released earnings in September. The dividend yield is currently 3.3%.

Kroger (NYSE:KR) is a well-established supermarket chain. Aside from offering food, many of its stores also have pharmacies and gas stations. These are three things people always need and which don't curtail purchasing. In fact, its one-stop shopping destination helps attract customers.

Its sales and earnings keep chugging along. In Kroger's most recent quarter, which ended on Aug. 15, its same-store sales excluding fuel rose by 14% and its adjusted earnings per share increased by 66% versus last year.

This is another company that has shown its confidence in the future by raising its dividend. The board of directors boosted September's payout from $0.16 to $0.18, marking 14 straight annual increases. This equates to a 2.2% yield.