With the coronavirus pandemic creating a swell in online shopping demand, Amazon ( AMZN -0.00% ) continues to add employees as it anticipates another demand surge for the holidays. Early in the pandemic, the company added 100,000 new full- and part-time workers.

The company says it has promoted more than 35,000 operations workers across North America this year, and now will add another 100,000 seasonal workers in anticipation of the holiday crunch. 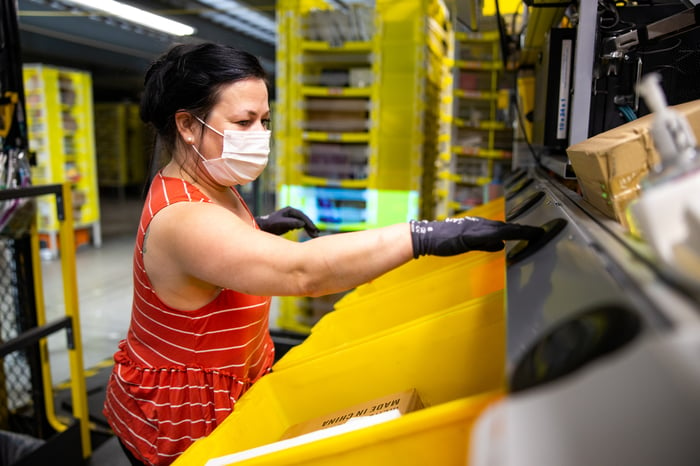 Amazon's vice president of global customer fulfillment, Alicia Boler Davis, said in a statement that many of the 35,000 newly promoted workers joined the company through seasonal hirings, similar to the one announced today.

The company said the new jobs will focus on "stowing, picking, packing, shipping, and delivering customer orders," but will also include a variety of other positions needed for IT, human resources, safety, and operating robotics. Amazon pays its workers a minimum of $15 per hour, and it said many of the new job locations include holiday bonus incentives.

Last month, Amazon said it was adding another round of 100,000 full- and part- time positions in the U.S. and Canada as it opened new warehouse facilities, bringing its total global workforce to approximately 1 million.

The boost in online shopping has been reflected in Amazon's financial results. For its second quarter ended June 30, 2020, its net sales grew to $89 billion, up 40% compared to the prior year period. When the company reports third-quarter results on Thursday, Oct. 29, it said it expects sales to be up between 24% and 33% compared to 2019. Any boost from the company's Prime Day sales event that occurred this month won't be seen in its financial reports until fourth-quarter results are announced.

3 Top Stocks to Buy in December