The goal is a self-driving Freightliner.

Waymo has a new partner. The Alphabet (GOOG 0.18%) (GOOGL 0.20%) self-driving subsidiary has inked a deal with Daimler's (MBGY.Y 0.38%) heavy-truck unit, in which the two will work to create self-driving tractor-trailers based on Daimler's Freightliner Cascadia trucks and the Waymo Driver autonomous taxi system. 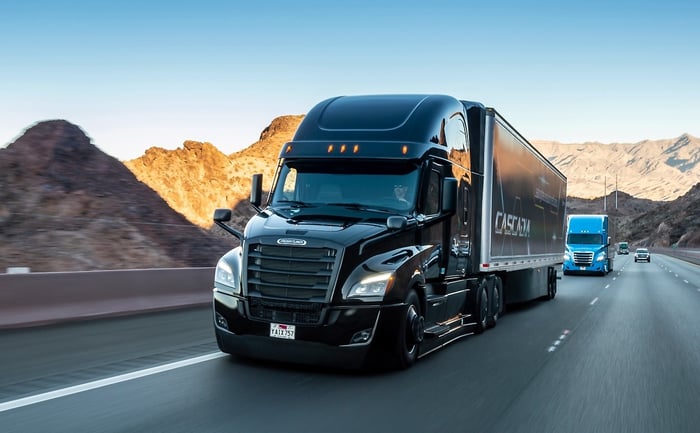 "This partnership complements Daimler Trucks' dual strategy approach, of working with two strong partners to deliver autonomous [Level 4] solutions that are seamlessly integrated with our best-in-class trucks, to our customers," said Daum.

Level 4 autonomous systems are those that can safely drive a vehicle without a human, but only under limited conditions. Generally, they are "geofenced," meaning limited to areas that have been carefully mapped, and they may also be restricted from operating during certain types of severe weather.

In an interview with Automotive News, Daum said that Daimler's work with Waymo will begin with a focus on developing trucks that can be more easily integrated with self-driving systems. Because there's no human to intervene in an emergency, self-driving vehicles require redundant steering and braking systems to keep them operating safely in the event of a component failure. Such systems don't yet exist for heavy trucks.

The companies did not announce a timetable for the development and deployment of self-driving tractor-trailers.