Find out which two companies set a downbeat tone on Wall Street.

Tuesday was another downbeat day for most of the stock market, as both the Dow Jones Industrials (^DJI -0.29%) and S&P 500 (^GSPC -0.81%) gave up ground. Declines were a lot less extreme than what investors saw on Monday. However, market participants remain cautious and uncertain about whether upcoming political and economic events will send the stock market into another chaotic downturn.

As investors wait for more news on big-picture issues, company-specific reports get a bit more attention. Earnings reports from Eli Lilly (LLY -0.59%) and Raytheon Technologies (RTX 0.97%) received close scrutiny from investors, and shareholders didn't seem all that happy with what they saw.

Lilly gets a double dose of bad news

Eli Lilly saw its stock drop almost 7% on Tuesday. The drugmaker not only had an earnings report that included results that were less than ideal, but it also said that a key element in its fight against COVID-19 hadn't borne fruit.

Lilly's results didn't seem bad on their face. Overall revenue moved higher 5% from year-ago levels on a 9% rise in volume. However, adjusted net income was up just 3% year over year. That was less than most investors had hoped to see. 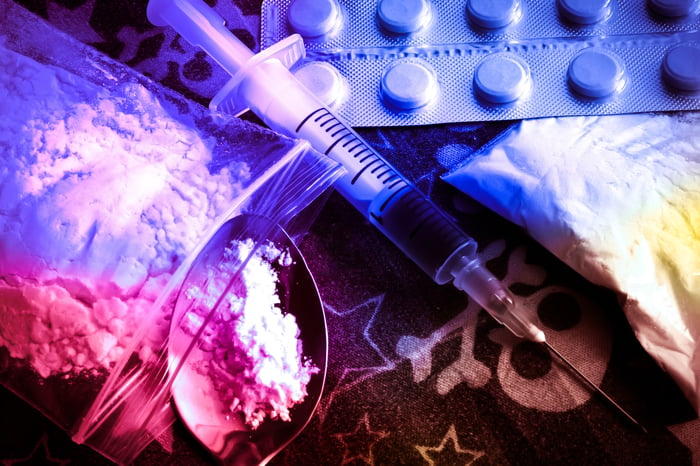 Lilly said that it lost some pricing power in the U.S., as the amount of rebates and discounts offered for key treatments differed from what the drugmaker had anticipated. That played a particularly notable role with Trulicity, Lilly's type 2 diabetes medication that has been a blockbuster for the company.

Yet what probably contributed more to the stock's drop was news that the drugmaker would halt a clinical trial for one of its COVID-19 candidate treatments. An independent safety board recommended no further hospitalized patients suffering from advanced COVID-19 receive Lilly's bamlanivimab. Lilly intends to keep researching the drug for other types of patients, but in today's environment, any bad news on the coronavirus front is bad news for the stock price.

Interpreting the numbers was somewhat complicated by the fact that Raytheon has gone through a big set of strategic acquisitions and divestitures over the past year. Revenue was higher by $3.4 billion to $14.7 billion, but net income plunged by 77% to $264 million. That resulted in a big drop in earnings per share for the company.

Weakness in the aviation industry weighed particularly heavily on Raytheon. Both the Collins Aerospace and Pratt & Whitney divisions saw segment sales drop 34% year over year, with Collins seeing profits drop more than 90%, and Pratt & Whitney reversing a year-earlier profit with a substantial loss. Higher volumes of sales on military aircraft were more than offset by declines in the commercial arena.

With airline stocks going through tough times, it's not surprising to see suppliers like Raytheon go through some tough times. Nevertheless, the extent to which the newly reorganized company is suffering came as a shock to some shareholders. Unfortunately, there could be more pain ahead for Raytheon in the future.