It's what's on the horizon that investors should focus on when this company reports earnings.

With earnings season in full swing, investors who have a particular interest in fuel cells and the burgeoning hydrogen economy will surely be focused on Bloom Energy (BE -3.67%) this Thursday when the company is set to report its third-quarter earnings. Surely, most investors are interested in whether the company -- as it did last quarter -- will beat the analysts' revenue and earnings estimates of $199 million and negative $0.18 per share.

But those are far from the most important details investors should focus on when the company reports earnings. Instead, investors would be better off looking to see whether management comments on the company's projects in South Korea and with the maritime industry. Though they won't move the needle for the company in Q3, success in these endeavors may portend a future boon for the fledgling fuel cell company. Moreover, instead of the income statement, investors should be acutely focused on the company's cash flow in the quarter. 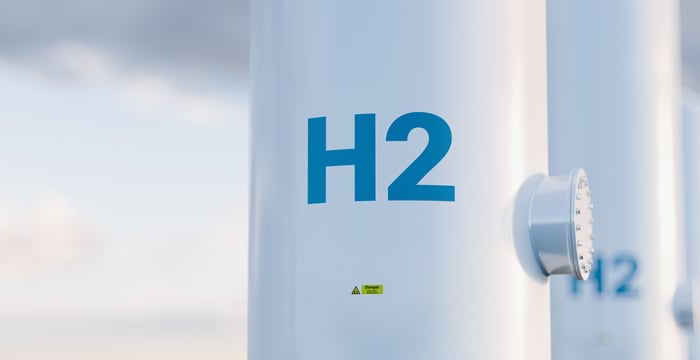 Global interest in hydrogen solutions has grown considerably in 2020 -- a topic fellow Fool.com contributor Matt DiLallo has explored recently -- and South Korea has made no secret about its enthusiasm for the place it expects to occupy in its future energy landscape. In January 2019, for example, South Korea announced its goal to deploy 15,000 megawatts (MW) of fuel cells by 2024 -- an ambitious goal considering the country currently has about 300 MW of fuel cell deployments. And it's possible that Bloom Energy will play a significant role in helping the nation achieve its target.

Bloom Energy already has a considerable footprint in South Korea as it has sold about 120 MW of fuel cells to SK Engineering and Construction (SK E&C), representing over $1 billion in equipment and future services revenue for Bloom. And that may grow substantially in the coming years. Looking ahead, SK E&C's management anticipates annual fuel cell sales of 400 MW.

While combing through Bloom Energy's Q3 earnings report, investors should look for commentary indicating that the company remains on track to ship its 100 kilowatt pilot Server, featuring a new solid oxide electrolyzer for production of renewable hydrogen, to South Korea before the end of the year. Likewise, investors can look for confirmation that the pilot project is still expected to power an SK E&C facility in early 2021. A delay in the pilot project could delay the second phase of the collaboration: the deployment of a 1 MW hydrogen Server installation in 2022.

Setting sail... at some point

Another future opportunity for Bloom Energy is the fuel cell solutions it's developing for use on the high seas. In late June, Bloom Energy announced a partnership with Samsung Heavy Industries (SHI) to collaborate and bring a fuel cell-powered ship to market in 2022. While the company hasn't indicated that there will be any developments in the third quarter, investors can look for commentary that the company remains on schedule with its timeline which has it and SHI finalizing a concept in the fourth quarter.

The pursuit of fuel cell solutions for the maritime industry is of particular interest considering the International Maritime Organization's commitment to reducing emissions. The organization has targeted aggressive reductions in emissions by 2030 and 2050 with an ultimate goal of achieving zero emissions before 2100.

Although Bloom Energy's experience in developing fuel cell solutions for the shipping industry is in the nascent stages, it is worth keeping an eye on as it could be an excellent way for the company to diversify its product and solutions offerings.

Will it continue to outshine its peers?

While I'll be curious to see whether the company meets analysts' top- and bottom-line expectations, I'm much more interested in seeing how the company fared in generating operational cash flow last quarter. Although Bloom Energy -- like its peers Plug Power and Ballard Power Systems -- continues to report negative earnings, it has distinguished itself from Plug and Ballard in its ability to generate positive cash flow. 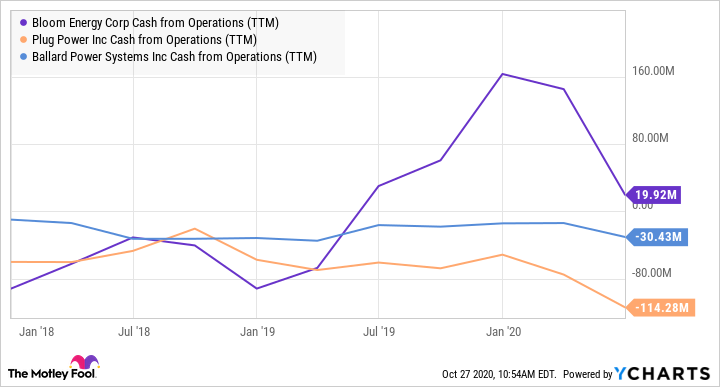 While no shareholder wants to see a company report negative earnings, it's much more bearable if the company is generating positive cash flow. And in the case of the fuel cell industry, Bloom Energy appears more alluring than its competitors due to its ability to generate cash organically, unlike Plug and Ballard, which are continually forced to raise capital through the issuance of both equity and debt.

The final focus on this fuel cell stock

For investors who are focused on Bloom Energy thanks to the growing fervor around the hydrogen economy and fuel cell stocks in general, there's a lot to watch when the company reports Q3 earnings. Should the company report progress in its partnerships with SK E&C and SHI, it could be an auspicious sign for the company's future. And, of course, a return to generating positive cash flow could represent another electric sign for the company, substantiating the argument that the company is the industry leader -- and a growth stock to keep a close watch on.