Air travel demand remains far below normal levels. Nevertheless, for many U.S. airlines, this summer marked the beginning of what will be a long recovery period.

Not so for Hawaiian Holdings (NASDAQ:HA). Strict quarantine requirements for travelers to Hawaii caused demand to remain minimal in the third quarter, leading to another ugly loss for the Hawaiian Airlines parent. Fortunately, the company has plenty of liquidity. Moreover, Hawaii recently implemented a pre-travel testing program that will allow tourists to avoid the mandatory quarantine, which could help the Hawaii-focused airline start recovering this quarter.

Three months ago, Hawaiian Holdings reported an adjusted loss of $175 million ($3.81 per share) for the second quarter, as revenue plunged 92% year over year on a 92% decrease in capacity.

Hawaiian's third-quarter top- and bottom-line results were similar. Revenue plunged 90% year over year to $76 million on an 87% capacity decrease. The company posted an adjusted net loss of $173 million ($3.76 per share). This was worse than the analyst consensus, which called for revenue of $97 million and a loss of $3.48 per share.

Still, there was one bright spot in the results. Cash burn slowed compared to the second quarter, averaging $2.6 million per day, including a $400,000 per day benefit from income tax refunds Hawaiian Holdings was able to claim under a provision of the CARES Act. 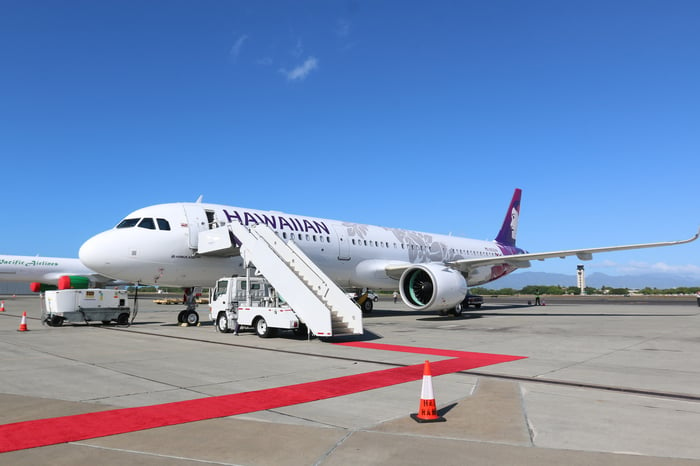 A ray of hope

Hawaiian Airlines got its biggest piece of good news in months when Hawaii effectively reopened to tourists earlier this month. Since the early days of the pandemic, Hawaii's government has required anyone entering the state to quarantine for 14 days. That made short-term tourism impractical. However, since Oct. 15, the state has permitted travelers who get a negative result on an approved COVID-19 test within 72 hours of departure to bypass the quarantine.

Like its peers, Hawaiian Airlines has been offering customers easy access to drive-through and at-home COVID-19 tests to facilitate their travel. And there are promising signs that the change in state policy is unleashing a wave of pent-up demand.

First, Hawaiian's inbound flights from the mainland to Hawaii have averaged a 57% load factor since Oct. 15. For comparison, Hawaiian Airlines reported a 26% load factor for the third quarter. Second, fourth-quarter bookings have ranged from 35% to 55% of 2019 levels since the program went into effect on Oct. 15, up from around 10% of historical levels in early September. Booking momentum is still trending upward, despite a recent resurgence in COVID-19 case numbers in many parts of the U.S.

Hawaiian Airlines executives are also cautiously optimistic that the pre-travel testing program will be extended to Japan before year-end. That would enable the carrier to start ramping up capacity in what is by far its most important international market.

Demand trends could change on a dime, and Hawaiian Airlines is maintaining the flexibility to respond appropriately. For now, it plans to operate 20% of its 2019 mainland-Hawaii schedule in October, 36% in November, and 54% in December, with an even greater level of service during the holiday peak season in late December.

Gauging demand on interisland and international routes is even harder, due to lingering travel restrictions. But based on what it knows today, management expects daily cash burn to slow to around $2.2 million per day this quarter: about $200 million for the full quarter.

Hawaiian Holdings ended last quarter with $979 million of cash and investments on its balance sheet. It is eligible to borrow up to $622 million from the federal government under a secured loan program created as part of the CARES Act, of which it has drawn just $45 million so far. The company has also slashed its 2021 capital spending plans to a range of just $40 million to $60 million by deferring its first Boeing 787 deliveries from early 2021 to late 2022. In short, Hawaiian has plenty of liquidity to ride out the pandemic.

The main questions now are whether the recent uptick in demand for mainland-Hawaii travel will continue and whether interisland and international demand will soon follow. The pace of the demand recovery will determine how soon Hawaii's hometown airline can return to profitability.