The biotech has plenty of cash and could be on the verge of its biggest success ever.

Moderna's (MRNA -2.01%) primary focus right now is to hopefully win regulatory approvals or authorizations for coronavirus vaccine mRNA-1273 to make it to the market. In the meantime, though, the biotech also has a business to run.

That business was front and center when Moderna announced its third-quarter results before the market opened on Thursday. Here are the highlights from its Q3 update. 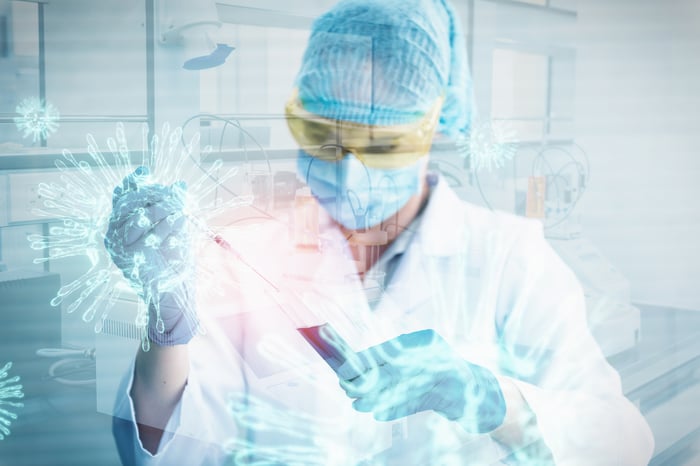 Moderna reported revenue in the third quarter of $157.9 million, up a whopping 829% year over year. This result blew past the average analyst estimate of $77.5 million.

Perhaps the most important financial measure for Moderna was its cash position at the end of the third quarter. The company reported cash, cash equivalents, and investments of $3.97 billion as of Sept. 30, 2020, nearly four times the $1.3 billion on hand at the end of 2019.

Moderna's huge revenue jump stemmed from the company receiving more grants. The biggest of these was the additional $472 million from the Biomedical Advanced Research and Development Authority (BARDA) in July to support the expanded late-stage study of mRNA-1273. BARDA previously awarded the biotech up to $483 million to fund a smaller phase 3 study of the experimental coronavirus vaccine.

With this massive revenue increase, it makes sense that Moderna's bottom line also improved. However, the company's spending rose quite a bit as well. Research and development costs soared 188% year over year to $344.5 million. General and administrative expenses jumped 72% to $48.5 million.

Although it wasn't included in Moderna's income statement, the company recorded $1.1 billion as deferred revenue in the third quarter. This large amount stemmed from customer deposits related to supply agreements for mRNA-1273.

But the biggest possible catalyst for the biotech stock is the potential submission for Emergency Use Authorization (EUA) for mRNA-1273 in the U.S. The company has previously stated that it expected to be able to file for EUA by Nov. 25, 2020.

Moderna CEO Stephane Bancel said, "I believe that if we launch our COVID-19 vaccine, 2021 could be the most important inflection year in Moderna's history. We will have the resources to scale Moderna to maximize the impact we can have on patients in the next 10 years through numerous new medicines." If the company's late-stage studies of mRNA-1273 are successful, Bancel could be proven right.