Legendary New York Yankees catcher Yogi Berra was famous for his odd sayings. As coronavirus cases and hospitalizations rise in at least 37 states, one of my favorites comes to mind: "It's deja vu all over again."

In April, the pandemic created havoc in the healthcare industry as hospitals were forced to cancel elective procedures in an effort to free up space and keep beds in intensive care units (ICUs) available. Seven months and 225,000 deaths later in America alone, daily cases have reached a new record -- they peaked in April, July, and now again in October -- and the U.S finds itself back in the same situation it was in before. This all-too-familiar reality is sure to have big implications for some stocks. 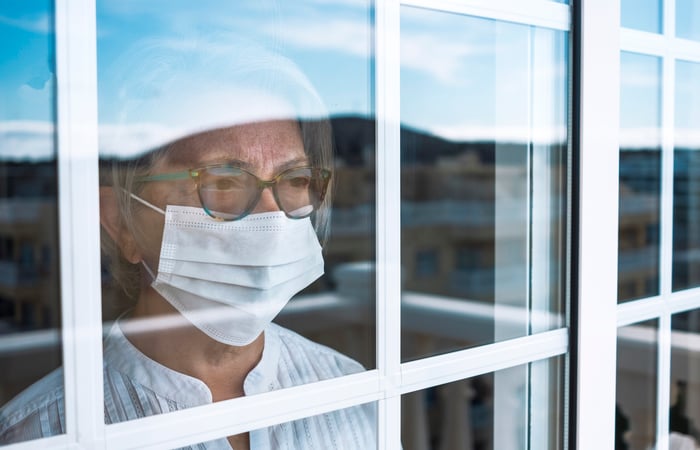 On Oct. 22, the U.S. Food and Drug Administration (FDA) approved Gilead Sciences' (NASDAQ:GILD) remdesivir as a treatment for COVID-19, making the antiviral the only currently approved drug to treat the novel coronavirus. The approval came after the company's own trial on 1,062 patients, which showed that the drug cut recovery time by five days and reduced risk of death in patients receiving oxygen support.

But other recent studies of remdesivir suggest that it might not be a silver bullet. The World Health Organization (WHO) has warned regulators around the world about ignoring what it called "robust" evidence that the drug offers little or no benefit. The WHO ran its own trials from March until October that studied over 11,200 patients.

The FDA had analyzed data from three randomized, controlled trials with hospitalized COVID-19 patients before announcing the approval; patients with mild to severe cases were included in those trials. One trial showed that median time to recovery was cut from 15 days to 10 days, with recovery defined as either being discharged from the hospital or not needing supplemental oxygen. The two other studies showed some slight benefits from remdesivir, but they were not statistically significant.

Until recently, Gilead had been donating doses in clinical trials and under an FDA Emergency Use Authorization (EUA). Upon FDA approval, the company set pricing for the treatment. The drug will cost $3,120 for the five-day course for patients with private insurance, and $2,340 for governments outside the U.S. It isn't clear how much uninsured patients (or the U.S. government) will pay. Whatever the price, the Department of Health and Human Services (HHS) has secured 500,000 treatment courses. While some complained about the price tag, analysts estimate keeping a patient out of the ICU saves about $40,000 per patient. All of these extra doses and profits led Gilead to raise its full-year forecast at the end of July by between $1 billion and $3 billion.

If further analyses and trials substantiate the WHO's studies of remdesivir, Gilead could be in trouble, and the price of the drug may be significantly reduced. However, as vaccine trials are delayed and potential mass distribution is pushed out into next summer or fall, the market for COVID-19 treatments is becoming as important as vaccines in the near term. As cases spike, keep in mind that about 2% result in hospitalization. The CDC estimates that there will be between 2,600 and 6,200 new hospitalizations per day by mid-November. Those numbers are similar to April's, and if they're as extreme predicted, demand for remdesivir will also be high.

One stock to avoid

As cases climb and hospitalizations follow, health systems like HCA Healthcare have to isolate patients, hold ICU beds available, and cancel elective procedures. Losing these lucrative surgeries has created a financial hole that hospitals have not been able to fill. This was the primary reason hospitals received $175 billion in the Coronavirus Aid, Relief, and Economic Security (CARES) Act that passed in March.

One of the most common elective surgeries in the U.S. each year is a joint replacement. In fact, more than a million people in this country have a hip or knee replaced each year. Zimmer Biomet Holdings (NYSE:ZBH) is the largest supplier of artificial hips and knees, with 32% market share in the $14.8 million global market. The pandemic-induced cancellations of elective procedures at hospitals cost the company dearly in the second quarter. Sales for the quarter, which ended June 30, were down 38%. In the Americas, sales of artificial knees and hips were down 47% and 33% respectively. The impact of the decreased number of procedures was mostly felt in April. The company withdrew guidance but sounded upbeat, indicating that procedures and sales were climbing back toward normal levels, citing a rapid recovery through May and June.

Unfortunately for investors, as COVID-19 cases continue to rise, hospitals will likely be forced to push out elective procedures again, putting a dent in Zimmer Biomet's recovery. Investors should avoid the healthcare stock (and those like it) until there is some clarity on if and when the U.S. can gain and maintain control of coronavirus outbreaks.