A small provider of medical supplies and logistics just raised its forecast, sending its stock up more than 50%, and the healthcare industry is eyeing a recovery.

During WWI, Londoners faced an unfamiliar threat -- German planes dropping bombs on the city. These air raids were the first sustained bombing campaign in history. Police devised a system of fireworks to alert citizens of a pending threat and carried signs advising the threat had passed. This "all-clear" signal has been adapted to many different kinds of threats and can be found in virtually every industry.

For Wall Street analysts, one of the biggest threats is uncertainty. As analysts try to build models predicting sales, expenses, and earnings per share down to the penny, they look to management to guide them in putting numbers in their spreadsheets. Sometimes, a company gives guidance that has implications for an entire industry. A tiny company may have just provided that type of indication for the healthcare industry, which is struggling to deliver profits as the coronavirus pandemic sidelines lucrative elective procedures. 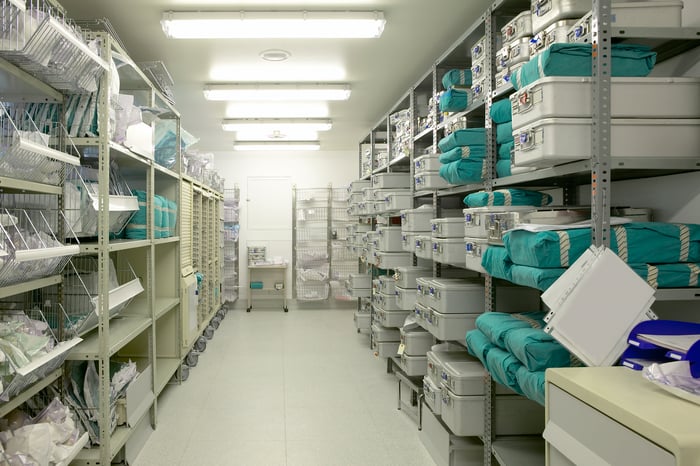 Owens & Minor (OMI 3.09%) has been serving the healthcare industry since 1882. Management reports results in two segments; the global products segment provides medical and surgical products, such as trays, sponges, towels, and patient apparel, while the global solutions segment performs services, such as warehousing, distribution, and analytics. The company's customers -- and sales -- are sensitive to the volume of elective procedures being performed. These elective procedures, including hip and knee replacements, spinal surgery, and hysterectomies, account for an estimated 60% of revenue.

Owens & Minor sports a market cap of $1.3 billion -- miniature compared to its competitors in the medical-distribution business, McKesson (MCK 1.88%) and AmerisourceBergen (ABC 1.38%), which are valued at $24 billion and $20 billion, respectively. While they are in the same industry, revenue growth by year illustrates how different these companies' fortunes can be from one another. 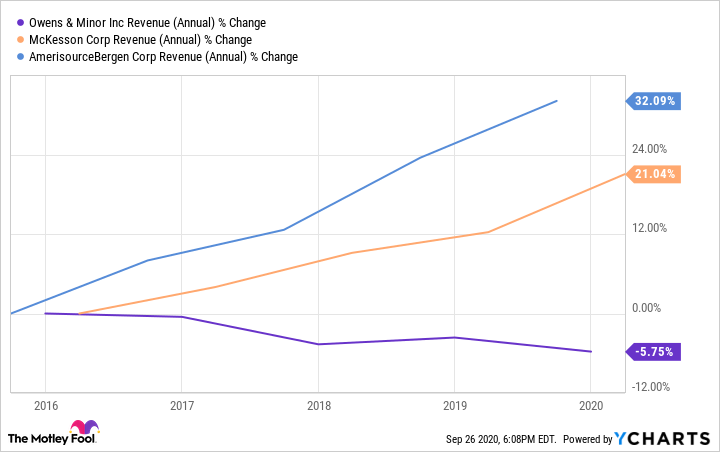 During the second-quarter earnings call in August, management at Owens & Minor set modest expectations for revenue for the second half of the year. To management's credit, they were explicit about Q2 details. As shutdowns took effect in the spring, the company did 70% of normal business in April, 85% in May, and exited June with a percentage in the lower nineties. They revised earlier expectations of a return to normalcy in the second half of the year, instead expecting to finish the year at the same pace they finished in June as the disease continued to affect many parts of the U.S.

However, this past week management raised earnings guidance by 66% and painted a slightly rosier picture for the rest of 2020 and 2021. While productivity and continued demand for protective equipment were given credit, the release also cited elective-procedure volume slightly above previous expectations, running in the low to mid-nineties percentage range. iI the trend continues, a return to pre-COVID levels could be on the horizon.

With elective procedures getting closer to levels seen before the coronavirus, investors may be making positive revisions to estimates for the companies closely tied to these lucrative surgeries. Facility operator HCA Healthcare (HCA 0.23%) and medical equipment and device providers like Intuitive Surgical (ISRG -0.82%), Stryker (SYK 0.97%), and Johnson & Johnson (JNJ 0.08%) should also see improved outlooks with procedures on the upswing.

Investors might want to be careful jumping to conclusions based on a tiny company in one of the least exciting parts of the healthcare industry. After all, one data point doesn't make a trend. But with many stocks in the healthcare sector still trading 10% to 20% below all-time highs set earlier this year, this might be the best opportunity to purchase them for some time -- if Owens & Minor's upbeat outlook holds for the rest of the industry.