Market conditions in the refinery sector remained incredibly challenging during the third quarter, which was evident in Phillips 66's (NYSE:PSX) earnings, or lack thereof. However, the oil refiner has offset some of that sector's challenges thanks to the diversification of its operations. Because of that and its strong financial profile, Phillips 66 remains committed to its nearly 8%-yielding dividend.

Phillip 66's adjusted loss narrowed considerably during the third quarter thanks to its diversified business model:

The company benefited from a recovery in three of its four business units. Earnings in the midstream segment rebound nearly 45%. Fueling the improvement was higher pipeline and terminal volumes due to the ramp-up of the recently completed Gray Oak pipeline, an improvement in natural gas liquids (NGL) volumes at its Sweeny Hub, and higher earnings from its investment in master limited partnership DCP Midstream (NYSE:DCP).

Finally, earnings from marketing and specialties surged 42%. The main drivers were higher margins and volumes, fueled by improving market conditions and recovering demand.

Those three segments nearly offset the loss from the company's refinery operations, which widened during the third quarter. The main issue was weaker margins, which declined another 32% during the quarter and more than offset higher volumes. Overall, the company utilized 77% of its refinery capacity during the quarter, up from 75% in the second. Utilization improved in the Central and West Coast regions but declined in the Gulf Coast due to maintenance and hurricane-related power outages.

While Phillip 66 reported a small adjusted loss during the third quarter, it generated $491 million in cash. That was more than enough money to cover the $393 million it paid in dividends. It also provided some of the funds needed to cover the $549 million it invested into capital projects. The refiner used its strong balance sheet to finance the remaining amount. Even with that outspend, the company ended the second quarter with $1.5 billion in cash and $5.5 billion of available credit. 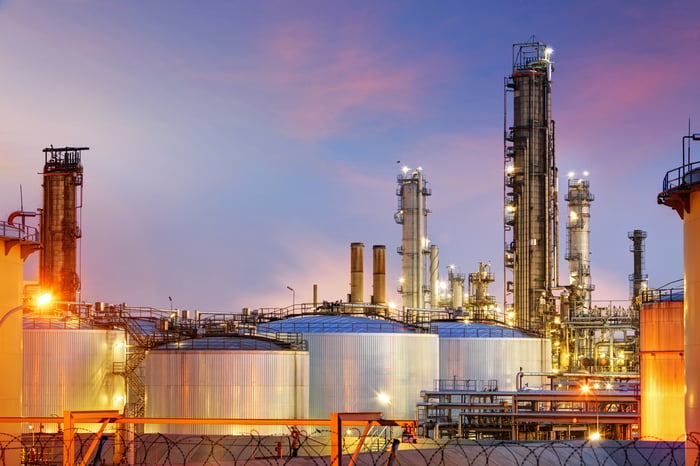 A look at what Phillips 66 sees ahead

Phillips 66 expects to invest a total of $2.9 billion in capital projects this year. It recently completed two new NGL fractionators at its Sweeney Hub and expected to finish a new export dock at its Beaumont Terminal by year-end. Meanwhile, the company recently sanctioned the reconfiguration of its San Francisco refinery to produce renewable fuels. Instead of using crude oil, the facility will make fuels from cooking oil, fats, greases, soybean oils, and other products. It will have the capacity to produce 800 million gallons of renewable fuel per year, which will make it the largest in the world when it starts up in early 2024.

Besides that project, most of the company's other growth projects are winding down or on hold. Thus, capital spending seems likely to decline in 2021, which would give it more financial flexibility.

Because of that, and the company's strong balance sheet, it remains "committed to a secure, competitive and growing dividend." Thus, despite all the turbulence in the oil market this year, it seems likely that Phillips 66 will continue to maintain its dividend during the sector's current rough patch and resume growth when refinery market conditions improve.

Holding the line on the dividend

While 2020 has been a tough year for oil-fueled dividends, Phillips 66 has maintained its payout thanks to its diversified operations and strong balance sheet. The company has lots of cash and available credit to continue paying its dividend and funding its capital program. Meanwhile, with market conditions likely to improve next year while capital spending declines, it will have even more flexibility to maintain its payout. That makes it looks like a sustainable option for investors seeking a high-yielding dividend in the oil patch.